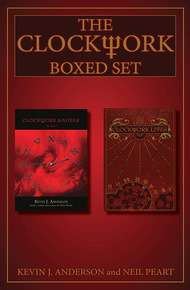 For more than two centuries, the land of Albion has been ruled by the supposedly benevolent Watchmaker, who imposes precision on every aspect of life. Young Owen Hardy from the village of Barrel Arbor dreams of seeing the big city and the breathtaking Clockwork Angels that dispense wisdom to the people, maybe even catching a glimpse of the Watchmaker himself.

He watches the steamliners drift by, powered by alchemical energy, as they head towards Crown City— never dreaming that he is already caught between the grandiose forces of order and chaos, between the Watchmaker and his nemesis, the Anarchist. Owen's journeys begin at a fabulous carnival with clockwork wonders beyond his imagination and take him aboard airships, far into the Redrock Desert to seek lost cities, through storms at sea to encounters with pirates … and give him a chance at love. With illustrations by noted album artist Hugh Syme and complete with album lyrics, Clockwork Angels: The Novel is a remarkable, innovative story unlike any other.

A good life, too, though it didn't always feel that way. From the very start, I had stability, measurable happiness, a perfect life. Everything had its place, and every place had its thing.

I knew my role in the world.

What more could anyone want? For a certain sort of person, that question can never be answered; it was a question I had to answer for myself in my own way. Now that I look back along the years, I can measure my life and compare the happiness that should have been, according to the Watchmaker, with the happiness that actually was. Though I am now old and full of days, I wish that I could live it all again.

Yes, I've remembered it all and told it all so many times. The events are as vivid as they were the first time, maybe even more vivid . . . maybe even a bit exaggerated. The grandchildren listen dutifully as I drone on about my adventures. I can tell they find the old man's stories boring— some of them anyway. (Some of the grandchildren, I mean . . . and some of the stories, too, I suppose.) When tending a vast and beautiful garden, you have to plant many seeds, never knowing ahead of time which ones will germinate, which will produce the most glorious flowers, which will bear the sweetest fruit. A good gardener plants them all, tends and nurtures them, and wishes them well. Optimism is the best fertilizer.

Under the sunny blue sky on my family estate in the hills, I look up at the white clouds, fancying that I see shapes there as I always have. I used to point out the shapes to others, but in so many cases that effort was wasted; now the imaginings are only for special people. Everyone has to see his own shapes in the clouds, and some people don't see any at all. That's just how it is. In the groves that crown the hills, olive trees grow wherever they will. From a distance, the rows of grapevines look like straight lines, but each row has its own character, some bit of disorder in the gnarled vines, the freedom to be unruly. I say it makes the wine taste better; visitors may dismiss the idea as just another of my stories. But they always stay for a second glass.

The bright practice pavilions swell in the gathering breeze, the dyed fabric puffing out. That same gentle wind carries the sounds of laughing children, the chug of equipment being tested, the moan and wail of a calliope being tuned. While preparing for the next season, my family and friends love every moment— isn't that the best gauge of a profession? My own contentment lies here at home. I content myself with morning walks along the seashore to see what surprises the tide has left for me. After lunch and an obligatory nap, I dabble in my vegetable garden (which has grown much too large for me, and I don't mind a bit). Planting seeds, pulling weeds, hilling potatoes, digging potatoes, and harvesting whatever else has seen fit to ripen that week. Right now, it is squash that demands my attention, and four of my young grandchildren help me out. Three of them work beside me because their parents assigned them the chores, and curly haired Alain is there because he wants to hear his grandfather tell stories. The exuberant squash plant has grown into a jungled hillock of dark leaves with myriad hair-fine needles that cause the grandchildren no small amount of consternation.

Nevertheless, they go to war with the thicket and return triumphant with armloads of long green zucchinis, which they dump into the waiting baskets. Bees buzz around, looking for blossoms, but they don't bother the children. Alain braves the deepest wilderness of vines and emerges with three perfect squash. "We almost missed these! By the next picking, they would have been too big." The boy doesn't even like squash, but he loves seeing my proud smile and, like me, takes satisfaction in doing something that would have gone undone by less dedicated people. He feels he has earned a reward. "Tonight could I look at your book, Grandpa Owen? I want to see the chronotypes of Crown City."

After a pause, Alain adds, "And the Clockwork Angels." This is not the same book that I kept when I was a young man in a small humdrum village, but Alain does have the same imagination and the same dreams as I had. I worry about the boy, and also envy him.

"We can look at it together," I say. "Afterward, I'll tell you the stories." The other three grandchildren are not quite tactful enough to stifle their groans. My stories aren't for everyone— they were never meant to be— but Alain might be that one perfect seed. What more reason do I need to tend my garden?

"The rest of you don't have to listen this time," I relent, "provided you help scrub the pots after dinner." They accept the alternative and stop complaining. How can this be the best of all possible worlds when doing the dishes seems preferable to hearing tales of grand adventures? Of bombs and pirates, lost cities and storms at sea? But Alain is so excited he can barely wait. Adventuring is for the young. Ah, how I wish I were young again….