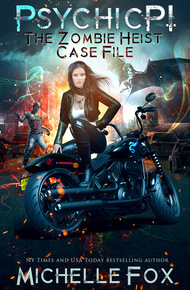 USA Today and NY Times bestselling author Michelle Fox lives in the Midwest with her husband, teen, and two labs who steal her socks and all the space on the couch. She believes in magic, which makes writing paranormal romance and urban fantasy a natural fit. Aside from writing, she runs the Wolf Pack Reads group on Facebook, a large, active community for readers and she does a lot of cooperative marketing work with authors. In her spare time, she and her husband work to remodel their 1860 farmhouse.

The plan is to hit pause and figure out my life, but my ex wants me to take a new case. A bank heist involving zombies, dragons, and magic mafia dons who take no prisoners.

It's hard to say no to a ghost who loves you, but this case will take more than psychic powers. I'm going to have to fight my way through and I'd better punch hard...or else I'll be a ghost next.

Michelle Fox is one of the rare indie authors who has earned her letters as a USA Today and New York Times Bestselling Author. We have been friends for several years and I have always been impressed with Michelle's smarts and savviness. Her books are aptly described as "highly addictive" and "a roller coaster rush". (Disclaimer: read at your own risk.) Psychic PI: the Zombie Heist Case File is an urban fantasy book featuring Sofia Parker, a scrappy heroine who always comes up swinging even if it means going fifteen rounds with a dragon.

Gold could make you rich, but only if it didn't kill you first—something the gossamer-winged pixie fluttering outside my shop hoped I didn't know.

She threw off so much glittering pixie dust, I couldn't miss her. I made note of her progress as she dodged the line for the Salem Witch Museum that often snaked past the entrance to my shop. She bumped into the shop door, struggling to enter. Her arms were full of something gold.

I sipped my coffee and kept looking at the antique pricing guide I'd been paging through. I knew better than to get excited. Dealing with Sidhe required a poker face made of stone.

She finally got the door open and then flew straight for me, carrying a gold bowl so heavy, it threatened to crash her into the floor. With a grunt that sounded more like it belonged to a three-hundred-pound strong woman than the Barbie-sized frame of a pixie, she heaved the bowl up onto the counter.

Panting, she pointed at it. "How much honey will you give me for this?"

I finished my coffee and studied the bowl. It was pretty and no doubt valuable, but the decorative scrollwork had sigils in it that I recognized as Sidhe. Humans with Sidhe gold never fared well, and while most people wouldn't realize the gold was bad news, I wasn't most people. This bowl would kill me if it could.

The pixie, counting on common human greed and ignorance, failed to consider I might not be common. Understandable since humans rarely had any innate magical ability, but as a psychic, I was one of the few exceptions to the rule.

It ran in the blood. My family's roots predated Salem's witch burning days when we escaped the noose by virtue of our genetic second sight. Although, I didn't have to use clairvoyance to be suspicious of the pixie. A degree in art history and six years as an antique dealer had given me a keen eye for forgeries, stolen goods, and the people who sold them. Plus, while it was August, she was sweating like she was in a sauna on high.

Looking at her flushed cheeks, the faint gold sheen to her skin, and over-bright eyes, I doubted she had even considered I might be a bad mark. She was obviously honeyed out of her mind and probably hadn't planned much beyond scoring her next hit.

The Sidhe had no moral or legal prohibitions against drug use and honey was their favorite recreational drug. One only humans could supply since there were no bees in Fairy. It hadn't taken the Sidhe long to figure out that gold could buy them a lot of honey. The faker the better, at least initially.

Humans wised up once people went to prison for fraud when their fairy gold turned to dust. There were several deaths too, because, sometimes, Sidhe gold came with a curse. Nowadays, we humans bartered honey in exchange for services like scrying or magical teleportation. It was safer that way.

By current law, I had a duty to confiscate the gold bowl. Same as people with bad credit had their credit cards seized and cut in half right in front of them. But the last thing I wanted was to deal with the police again. The red mark on my wrist still hadn't healed from the last time I'd been cuffed. So I did the next best thing.

I smiled with false regret. "Sorry, I don't have enough honey to buy this from you." It wasn't a lie; honey was more than fifty dollars an ounce.

The pixie's lower lip trembled and tears gathered in her eyes. "You don't?" She looked past me to the tiny bottle of watered down honey I kept on hand for Sidhe customers.

Honey had helped me close many a deal, but the bottle was less than a quarter full. Not nearly enough to pay for the bowl. Although, from the desperate expression on her delicate face, if I offered it to her, she probably would've taken it.

"Nope, but I know someone who does." And who would also be happy to turn her over to the police and the Fairy Intelligence Bureau (FIB for short). I gave her directions to Captain Joe's Relics, an antique shop down by the wharf. We were friendly competitors, and he knew enough about my situation to understand why I would send the pixie to him instead of calling the police myself.

The pixie gave a nod of thanks, and stretching her thin arms back around the bowl, threw herself into the air with frantic flaps of her wings. For a second, she dipped out of sight below the counter, almost hitting the floor before recovering. I winced as she misjudged her clearance and smacked a shin on the corner of a vintage armoire. Fortunately for her, she was feeling no pain and flew on without stopping.

I went back to my pricing guide. As far as first days back at work went, things were going sort of okay-ish. No reporters. No gawkers. No business either, but it had been over six months since I'd flipped the sign from 'closed' to 'open'.

A lot had changed since then.

The shop felt like a time capsule. A perfectly preserved snapshot of my life before it fell apart. I'd been happy here. Before the accident, I'd been in a serious relationship with a thriving business. After...well, I wasn't lacking for dust bunnies.

The store was dirty. Dust coated everything, and mold grew fragrant in my favorite coffee cup. The smell was so bad, I threw the mug away rather than clean out the fuzzy gunk inside.

Note to self: Always wash out the coffee mug. You never know when you'll be accused of murder.

Boxes of inventory towered behind me, waiting to be processed, and a pile of paperwork—receipts, auction catalogs, correspondence, bills—covered the marble-topped bar that served as a checkout counter. I'd been trying to figure out where to start when the pixie came in.

Organizing the paperwork had seemed like a logical first choice, but I couldn't focus on it. The memories were too overwhelming, reminding me that, if life was a ladder, I'd fallen from the top to the bottom, a bottom with a sinkhole underneath, waiting to swallow me whole.

Tossing the pricing guide in the garbage, I grabbed a rag and dusted the jumble of armoires, dressers, and tables scattered about the shop. Maybe I just needed to work out my anxiety with elbow grease.

As I dusted, I kept my mind closed to the whispers of the past that tried to push through my fingertips to my mind's eye. Normally, I didn't mind the constant barrage of history. Being psychic was a bonus in the antique industry. I enjoyed the unique perspective on days gone by that my clairvoyance gave me, but there were a few recent events I didn't want to remember.

The youngest memories always had the strongest voice. If I let them, the walls would tell me all about my fall again.

They knew exactly what had happened. My downward spiral had begun here, and the plaster, even the support beams behind as well as every other item in the shop, chattered with the knowledge of it.

Well, they weren't actually talking. Inanimate objects didn't have personalities, but they did soak up impressions and events around them. People didn't just leave behind fingerprints when they touched something, but also bits of their energy, which then melded with objects, preserving some moments in time with startling clarity.

A sudden chill raised the hair on the back of my neck reminding me that, sometimes, a lot more than just energy was left behind. Even with the warning the temperature change provided, I still jumped when a familiar face smiled up at me from inside the oak table I was cleaning.

Also known as my recently departed ex-business partner and ex-boyfriend. Emphasis on the ex. As I liked to remind him, the dead don't close deals or date.