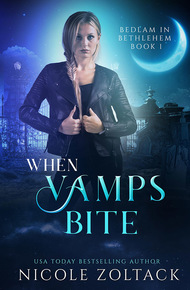 When she's not writing about knights, superheroes, or witches, she enjoys spending time with her loving husband, three energetic boys, and two precious girls. She enjoys riding horses (pretending they're unicorns, of course!) and going to the PA Renaissance Faire dressed in garb. She'll also read anything she can get her hands on. Her current favorite TV shows are The Witcher and Stranger Things.

When Vamps Bite - Bedlam in Bethlehem Book 1 by Nicole Zoltack

Vamps aren't real, right? Of course not. But detective Clarissa Tempest knows what she's seen. Unfortunately, she's a little distracted, and her actions earn her a suspension. Great. Life is really looking up. Maybe her therapist is right. Maybe she's under too much stress and is seeing things.

But then a vamp seeks her out, telling her to knock it off and leave them alone or else he'll knock her off.

Clarissa isn't the kind to back down, though, and she'll do whatever it takes to keep Bethlehem safe. She's just hoping that won't require her to lose a lot of blood… or her head.

When I conceived of a kickass heroine-themed bundle, Nicole Zoltack was one of the first names that came to mind. We have been friends for years, and Nicole is a first-class fantasy author. Her Once Upon a Darkened Night includes fifteen books. Nicole's repertoire ranges from fairy tale retellings to urban fantasy. In When Vamps Bite detective Clarissa Tempest must sharpen her stakes to keep her hometown safe from blood-sucking vampires. –Melissa Snark

The night is crazy busy yet in the center of the city. It doesn't take me long to leave the commercial district behind. Most of the houses I pass are dark.

I turn down another block. The street light flickers, recreating that eerie sense from the cemetery. I'm not the least bit afraid. I can take on anyone.

I near Five Points. Maybe I should just stop at Mickey D's to get ice cream.

One look at the parking lot, though, and I opt not to. Way too crowded. The line for the drive-through is even worse, not that I was the kind of person to walk through it. Nope. I stopped doing that after I graduated the academy.

Two blocks down, and I halt, my hand sliding toward my gun. I won't draw it unless I need to, but something isn't right. I just know it. Call it a sixth sense. Call it a premonition. Call it anything you want, but just don't call it luck.

Some mumbling, a grunt, and the rustling of clothing have me wondering if a couple is enjoying some alone time.

Or a prostitute is operating out of the alley.

Or a drug deal is going down. I'm in vice. My mind always goes to drugs.

Maybe I'm looking to be productive and delay returning to the empty house waiting for me. Either way, I'm unwilling to pass up the chance to investigate.

Maybe a little bit frightened since I am alone without backup, I enter the alley. The dim lighting from the street lamps doesn't illuminate the area, adding to a sense of doom.

Despite the darkness, I can still make out two forms. The mumbling and grunting have stopped, but I hear a near sound. It's almost like slurping.

What in the world?

Confused, dismayed, I opt for my flashlight and then bring out my gun, too.

The artificial illumination is harsh. It takes my eyes a moment to register what I'm seeing, to the terrifying, repugnant scene in front of me.

A man holds a woman, his face buried against her neck in what should be a tender pose.

Except the woman is lifeless in his arms, blood trailing down her clothing.

He isn't kissing her.