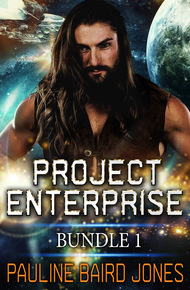 She's a stranded pilot. He's an alien castaway. Can their love save a galaxy torn apart by war?

Sara Donovan knew her top-secret expedition would be dangerous. But she never imagined she'd end up separated from her crew and stranded on an alien planet. When the smoke from her crash landing clears, she's surprised to find a marooned resistance fighter ready to lend a hand. In a war-torn galaxy, Sara refuses to give her trust lightly… especially when she risks exposing the strange abilities she's kept hidden since childhood.

Kiernan Fyn survives each day on the hope of exacting revenge on the warlord who murdered his wife. Sara is his ticket off the desolate rock to a new better future…until she's targeted by hostile forces who thinks she holds the key to a long-lost civilization. In a fight for their lives, sparks fly as Sara and Fyn attempt to decipher their hidden connection with the powerful key before their ruthless enemies distort its power for galactic domination.

The Key is the first novel in the phenomenal Project Enterprise sci-fi romance saga. If you like interstellar chemistry, fast-paced action, and sprawling space operas, then you'll love Pauline Baird Jones' award-winning epic.

Buy The Key to unlock a rollicking romantic adventure today!

She's an interstellar spy. He's an alien warlord. Can their love heal a rift in time and space?

Delilah Oliver "Doc" Clementyne specializes in impossible missions. When relations between the Earth Expedition and the Gadi starts to turn ugly, she's sent on a desperate mission to bring their people home before war breaks out. But Doc nearly blows her cover when she saves the life… and loses her heart… to the most hated leader in the galaxy.

Helfron "Hel" Giddioni has survived more than his fair share of assassination attempts. And he's not about to ruin his perfect record by letting a drop-dead gorgeous spy cloud his judgment. But when she's abducted by primitive brutes wielding high-tech weaponry, he can't help but tempt fate and fly in the face of danger.

With war brewing all around and celestial chemistry sparking between them, Doc and Hel uncover a startling secret with the power to bend space and time. To save the galaxy, they must battle their way into the past to safeguard the secret from forces who would use it to destroy the future.

Pauline Baird Jones and I first met in 2015 through the Edge of Never box set. She is a USA Today bestselling author who writes in a crazy-amazing range of genres, including romance, fantasy, and mystery thrillers. Pauline is a talented storyteller who never disappoints. Project Enterprise is a two-book SciFi volume set in a war-torn galaxy. The Key tells the tale of Sara Donovan, a solider stranded on an alien world. The saga continues in Girl Gone Nova with the exploits of interstellar spy Delilah Oliver "Doc" Clementyne. Page-turning adventure and romance for all readers. –Melissa Snark

Cordite burned into her nose bringing Doc awake and into a low-profile crouch. She eased a weapon free from concealment, ears straining for threats in darkness lit by a half-hearted fire. Nothing immediate presented itself, but her gut refused to stand down and her senses twitched like live wires in water. Something bad had happened. People were down. Stuff was on fire. It took a few seconds to orient her memory, to reconstruct where she was, what had happened and why she was on alert at the cellular level.

What light there was showed her the remains of the lovely Gadi reception hall. Moans filtered in between the soft crackle of fire somewhere off to her right. Her brain noted aches and pains in a variety of places, and smoke stung her eyes and lungs, but it was a low-level concern, all energy channeled to her stretched out senses.

She extracted her infrared monocle. Not everyone could split their vision, but her brain liked it. It pulled more data from the combo of IR and real-time viewing. With the IR in place, she surveyed her surroundings again. Heat signatures popped out of the haze, all of them prone, bodies and rubble tumbled together.

She would have been one of those bodies, but she'd realized she couldn't stop the attack and hit the deck before the blast. Still got her bell rung, of course.

She needed to find the General and not just because of his rank. He'd be one of the few wearing a radio. She wasn't officially military, so she didn't have one, though the Doolittle should be monitoring the contingent and seen the explosion on their sensors. There'd been at least one medical officer dirt side, but he'd been the one trying to push the bomber out of the hall. No way had he survived the blast.

Her brain needed more to do, so she set it to work estimating the general's current position, calculating trajectories and blast radius. Seemed a good idea to assess for structural integrity concerns, so she threw that into the mental mix, too.

She had a medical degree in her pocket, but black ops resisted going offline. It was a bit like having multiple personality disorder, but without the forgetting part. No persona ever completely left the building, preferring to jostle for attention inside her head, but if black ops didn't want to go back in the queue, maybe it shouldn't. Doc knew to trust her gut.

According to her calculations, General Halliwell had to be somewhere off to her left. Doc started that direction, pausing when a body in her path stirred and muttered something. She crouched next to him, but before she could do more than check his pulse, a change in the air current proved black ops had been wise to stick around. Her IR-free eye met the wounded man's gaze, a finger to her lips silenced whatever comment he'd planned to make.

Her backup weapon slid into her left hand as she went ghost. Both weapons were already silenced. She knew not to attract attention when she shot someone.

It was easy to locate the source of her unease. They were the only ones upright and moving. The bogeys split into two groups of two, using some kind of hooded light that extinguished any lingering doubt they were a rescue party. The lights passed over each body just long enough for an ID. They were hunting. Didn't take many of her brain cells to determine two possible targets. Doc decided to go hunting, too. She attached herself to the team heading in the direction that should lead to the General and saw his prone figure when they did.

"Finish him off and let's get out of here," one of them, a male, said, looking back over his shoulder. His eyes widened as his gaze connected with hers, his mouth started to move.

Doc's silenced weapon ended that move. The other found a target dead center of bogey number two. She turned before either body hit the ground. Thanks to her IR, she spotted team two. Didn't look like they'd found what they were looking for yet.

Sample from The Key:

A vague throbbing in her right temple towed Sara back to a consciousness she didn't want to face, though she was a bit fuzzy on why…

She opened her eyes to zero dark thirty—a darkness somewhat lightened by an eerie orange glow.

She not only wasn't in Kansas anymore, she wasn't in the cockpit of her bird. The roughhewn rock over head seemed to indicate she was in some kind of a cave, but how did she get from Dauntless to a cave?

…the double hit to her six.

…heading for the closest planet like a fast falling star.

…seeing the long stretch of flat, white beach between tangled mass of jungle and sparkling ocean.

The narrow beach had skimmed past way too fast as she struggled to manage her uncontrolled descent. She remembered pulling her nose up long enough to clear a rugged tumble of rock spilling from high bluff into ocean, but on the other side ground was ground and no landing is a good one that ends against a tree.

Yeah, she remembered the tree.

But she didn't remember a cave.

Her head didn't seem to like all the remembering. She touched the complaining spot, finding something that felt like a bandage at the apex of the pain.

Okay, didn't remember that either.

She tried moving various body parts. Everything was a bit banged up, but still worked, which was good. And she knew it would get better. It always did. Her zoombag had been loosened and her gloves were gone. Add that to the list of things she couldn't remember, with an asterisk for slightly creepy. As the rest of her senses began to come back on line she inhaled a warm, metallic scent that seemed to be emanating from a circle of rocks, the source of the orange glow. It was mixed with a warm, earthy smell and some scents she couldn't begin to identify. There was a bit of a nip in the air, the edge taken off by the…fire? Was it a fire? It didn't flicker like a fire.

It was deeply quiet in the cave, quiet enough to hear her own breathing. And someone else's. An icy trickle made its way down her back. Who, or what, was sharing this cave with her? Sara sat up, stifling a groan when various bruises and bangs registered formal protests to her brain housing group. She'd planned to stand up next, but something stirred across from her. Who—or what—ever it was rose, throwing an ill-formed and very large shadow against the wall and roof of the cave. Maybe it was the bad light, but the outline was very Sasquatch-ish—shaggy and kind of ominous. The icy trickle turned to a rushing stream. It moved toward her, passing into the half-light cast by the sort of fire. Not Sasquatch, though he could have been a second cousin. He had a head full of dreads, he bristled with armament, and he bulged with muscles wrapped in what appeared to be tight fitting leather. It was hard to find features—his face was darkened by dirt or camo, or both—but his eyes were deeply, sharply green.

And he was really, really tall. Sara had to tip her head way back to look up at him. He didn't speak, which upped the eerie factor a few more degrees. She somehow managed to get her legs under her and stand. She was a tall girl—Tall Girl was actually her call sign—but the top of her head didn't reach his chin. He'd have to be around seven feet to top her by that much. He looked like a ragged cave man, but there was a sharp intelligence in his eyes. And he'd managed to get her clear of her bird. Not exactly cro-mag man skills.

She wanted to say something, but all she could think of was, crap.

After a moment, she realized he was holding something out to her. A wooden-ish…thing. She took it, since he seemed to expect it.

"Thanks." Her voice sounded a bit loud, and a bit too bright, breaking the deep silence.

He blinked, just the once, the green of his eyes disappearing, then slowly reappearing. It was very Cheshire Cat—one channeling Tim Burton.

Not a good combo.