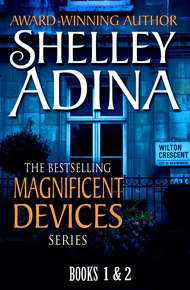 Shelley Adina is the author of 24 novels published by Harlequin, Warner, and Hachette, and more than a dozen more published by Moonshell Books, Inc., her own independent press. She writes steampunk and contemporary romance as Shelley Adina; as Charlotte Henry, writes classic Regency romance; and as Adina Senft, writes Amish women's fiction. She holds an MFA in Writing Popular Fiction from Seton Hill University, and is currently at work on a PhD in Creative Writing with Lancaster University in the UK. She won the Romance Writers of America® RITA Award® in 2005, and was a finalist in 2006. She appeared in the 2016 documentary film Love Between the Covers, is a popular speaker and convention panelist, and has been a guest on many podcasts, including Worldshapers and Realm of Books. When she's not writing, Shelley is usually quilting, sewing historical costumes, or enjoying the garden with her flock of rescued chickens.

She wants to be an engineer, but society will never allow it. Until riots break out in steampunk London and she seizes her chance...

It's 1889, and Lady Claire Trevelyan is expected to do nothing more with her life than catch a rich husband. Unfortunately, her talents lie not in the ballroom, but in the laboratory, where her experiments have an embarrassing habit of blowing up.When her father gambles the estate on the combustion engine and loses, Claire finds herself out in the street with nothing to her name but her steam landau and her second best hat.

But the embarrassments of her old life might be the talents that save her now ... if she can stay alive long enough to barter her skills for a street gang's protection. It's not long before a new leader rises in the London underworld, known only as the Lady of Devices … a double life Claire must keep secret. Will she achieve her goal of an engineering degree? Will her loyalty to her friends be her undoing when it jeopardizes the plans of powerful men? And just how many funerals will her unfortunate mother be forced to arrange?

Shelley Adina is an acclaimed author in steampunk fantasy known for her fun, fast-paced adventure stories set in the Victorian era. The author imbues her enterprising heroine Lady Claire Trevelyan with her personal philosophy, "A lady of resources makes her own luck." Reviewers and fans have praised the Magnificent Devices series for its powerful feminist protagonist and page-turning excitement. We are fortunate to be able to offer a two-book set, including Lady of Devices and Her Own Devices. –Melissa Snark

They were too small to be airships, and too ephemeral to be bombs. Glowing with a gentle orange light, each the size of a lantern, they floated up into the night sky powered by a single candle and the most delicate of tiny engines.

One didn't, after all, simply release such dangerous things without a means of directing where they were to go.

"They're so pretty," Maggie breathed.

"Sh!" Her twin sister Lizzie, both of them having no surname that anyone knew, nudged her with urgency. "The Lady said to be quiet."

"You be quiet! Since when d'you listen to the Lady at the best o' times?"

"Mopsies!" Lady Claire Trevelyan, sister of a viscount, formerly a resident of Belgravia and now a resident of a hideout in Vauxhall gained at the price of a brigand's life, glared at both girls. They'd been on many a night lookout. What were they thinking, to risk giving away their position by whispering?

Though Claire had to admit that the beauty of the balloons' dreamy flight hid the fact that she, Jake, and Tigg had constructed them out of a rag picker's findings: a silk chemise, a ragged nightgown so fine she could draw it through her grandmother's emerald ring, a pair of bloomers that a very broad lady had thrown away because of a tear she was too wealthy to mend.

Add to this a little device Claire had been working on that would act as a steering and propulsion mechanism, and you had a set of silent intruders that could go where she and her accomplices could not.

Hunching their shoulders at the reproof, the girls settled behind the tumbledown remains of a churchyard wall to watch the half-dozen balloons sail away with their cargo over the width of a street and up over a two-story stone wall as impregnable as a medieval keep.

The spider takes hold with her hands, and is in kings' palaces. Well, tonight she was the spider and the inhabitants of "The Cudgel" Bonaventure's fortress were about to learn a lesson in manners. One did not jump the associates of the Lady in the street and relieve them of the rewards of their night's work in the gambling parlors without reprisal. The candles that caused the balloons to rise would not set his fortress on fire, but the chemical suspended in a single vial from each certainly would.

An owl hooted, rather more cheerfully than one might expect. "They're over the wall," Snouts McTavish translated. "We can move in when you give the word, Lady."

"I think it will be safe to wait for Mr. Bonaventure in the street. Jake, do you have the gaseous capsaicin devices should he prove foolish?"

She had known Jake for several weeks. Even now, she was not sure he wouldn't use such a device on her and challenge Snouts for lieutenancy of their little band of the abandoned and neglected. However, if someone were to prove himself trustworthy, he must perforce be trusted. Leaving him in charge of the satchel with its clinking contents was a calculated risk, but it was one she must take. Especially since he had compounded the devices himself.

"Right, then. Let us offer advice to the distressed and homeless, shall we?"

The glow over the wall was bright enough to light their way into the street as the buildings behind it caught fire. The contents of each vial suspended beneath its balloon had ignited on contact with air as the candles burned out and they dropped out of flight, higgledy-piggledy all over the roof of The Cudgel's headquarters. Wood that had been dried out during the hot summer—old wood, that had been standing since long before their glorious Queen's time—ignited and in seconds the oldest part of the building had gone up like a Roman candle.

Claire regretted the loss of the steering mechanisms—a particularly nice bit of engineering she was quite proud of—but at least they had gone in a good cause.

The Cudgel would think twice before picking on her friends again.

The entire house was engulfed in roaring flame by the time the single gate creaked open and a small crowd of men and boys tumbled through it, gasping and slapping smoldering sparks and holding bits of clothing over their faces against the smoke.

Hmph. And where were the women holding positions in The Cudgel's hierarchy? Her opinion of his leadership dropped even lower.

The wailing of the fire engines in the distance told her she must be succinct.

"Mr. Bonaventure!" she called, stepping into full view in the middle of the street. She had dressed carefully in raiding rig for the occasion, in a practical black skirt that could be rucked up by means of internal tapes should she have to run or climb. She had dispensed with a hat for the evening, choosing instead to simply leave her driving goggles sitting in front of her piled hair, a gauzy scarf wound over it and around her neck. A leather corselet contained a number of hooks and clasps for equipment, and instead of her trusty rucksack, which Jake was wearing, she now wore a leather harness with a spine holster specially made to the contours of the lightning rifle she had taken from Lightning Luke Jackson three weeks ago. She was pleased to see that her lacy blouse remained pristine white, despite the half-hour spent huddled behind the wall.

She slid the rifle from its holster over her shoulder and held it loosely, her index finger hovering over the power switch.

In ones and twos, the small crowd of smoked criminals realized what she held—and therefore, who she was. Slowly, they backed against the wall, leaving The Cudgel exposed to her aim.

Hmph. So much for honor among thieves.

The Cudgel eyed her. "I know you. Wot business you got 'ere?"

The sirens sounded closer. They would be crossing the Southwark Bridge over the Thames even now. "Just this," she said, enunciating crisply so that there would be no misunderstanding. "Last night your men set upon four of my friends returning from the gaming halls, and took everything they had. This is a warning to you that I do not tolerate abuse of my friends or the fruit of their honest labor."

She hefted the rifle and pushed the power switch. "I suggest you apply your limited intellect to it."

His head thrust forward like that of an angry bulldog whose bone has just been ripped from its teeth. "I say you go back to your needlepoint like a good little girl and think about wot I'm goin' to do to you for—"

The gun hummed happily, its pitch and frequency announcing that it was ready for work. Claire's index finger now rested on the trigger.

"If I hear that you have stepped foot in Vauxhall, with or without evil intent, your own yellow belly will be the last thing you ever see."

Yellow belly? Goodness. That was a line straight out of one of the melodramatic flickers she and Emilie had been addicted to centuries ago—two months ago—when she had been a green girl.

"You may address me as the Lady."

He started across the street. "And you must address this. Creeper! Hiram! Hold her down." He fumbled with the buttons on his trousers, while Claire stared in astonishment. Really. With the fire engines nearly upon them and his house burning to cinders as they spoke, he thought he could threaten her by means of his disgusting person?

Creeper and Hiram, whoever they were, did not, in fact, hold her down. However, two shadows detached from the main body of the huddle and slipped away down the alley at the corner of the wall. Snouts, Jake, and Tigg formed an immovable mass at her back.

Claire sighed. "Really, Mr. Bonaventure. You should not, as my mother often told me, use a pin when a needle is called for. Particularly so dull and short a pin."

She pulled the trigger and a bolt of lightning shot across the street, singeing him neatly between the legs and burning the inner seams of his canvas trousers clean away.