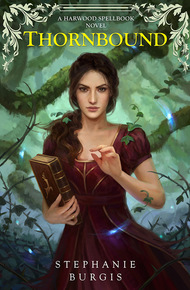 Stephanie Burgis was born in Michigan but now lives in Wales, surrounded by castles and coffeeshops. She writes wildly romantic adult historical fantasies, including the Harwood Spellbook Series and also Masks and Shadows. She also writes fun, funny fantasy adventures for MG readers, including the Dragon with a Chocolate Heart trilogy and the Kat, Incorrigible trilogy. You can find out more (and read excerpts from all of her books) at:www.stephanieburgis.com

Cassandra Harwood scandalized her nation when she became the first woman magician in Angland. Now, she's ready to teach a whole new generation of bright young women at her radical new school, Thornfell College of Magic…

Until a sinister fey altar is discovered in the school library, the ruling Boudiccate sends a delegation to shut down Thornfell, and Cassandra's own husband is torn away from her.

As malevolent vines slither in from the forest and ruthless politicians scheme against her, Cassandra must fight the greatest battle of her life to save her love, her school, and the future of the young women of Angland.

Stephanie Burgis is a new acquaintance, and this StoryBundle will be our first project together. Gail Carriger recommended Stephanie for her high-quality portrayal of strong women in historical settings. Thornbound is a romantic fantasy novel about Cassandra Harwood, a revolutionary who defies sexist traditions to found her nation's first college of magic for young women. Like all true heroines, Cassandra must fight to protect what's hers and fight for what she believes in. –Melissa Snark

It was bad enough to be deprived of my new husband before our wedding night. It was utterly unjust to be tormented by nightmares weeks afterward as I slept, still alone, in our marital bed.

For the ninth morning in a row, I woke up gasping and clawing at my throat, fighting to yank piercing thorns out from my skin...thorns that, of course, existed nowhere but in my dreams.

Groaning, I tipped my head back against my pillow. Darkness filled the un-curtained windows across from me, with no hints of dawn yet to illuminate the thick woodland beyond. Still, I knew better than to make any reckless attempts to fall back to sleep. There was only one dream I ever experienced nowadays, and it would suck me directly back into its maw if I allowed my eyes to fall shut again.

It was exhausting, infuriating, and an irony beyond compare for the headmistress of Angland's first women's college of magic to be the only magician in the nation who couldn't cast a simple spell to protect her sleep. I had lost my own magic over nine months ago, though, and Wrexham's pillow—which had been placed so hopefully beside mine on the morning of our wedding five weeks earlier—was still depressingly empty and unused. He had been called away by an urgent messenger in the middle of our wedding breakfast, and he still hadn't returned from the latest wild goose chase that he'd been sent on by the Boudiccate.

Of course, their messages always claimed that no other officer of magic could be trusted with any of those vital missions that had disrupted every day he'd reserved to spend with me after our wedding...but the message behind that endless stream of summonses was unmistakable. Those powerful, elegant women who collectively ruled our nation were anything but subtle in their indications of displeasure—and although my late mother had once led their number, I myself was now officially their least favorite constituent.

Groaning, I pushed my bedcovers aside and forced myself upright, fighting through the sticky cobweb of exhaustion and leftover dread that that hateful dream always left in its wake. In the unrelenting darkness, it was too easy to remember the inescapable, choking helplessness I'd felt, again, as thorn-covered vines wound around my throat and mouth and—

No. My teeth clenched as I slammed my bare feet onto the cold wooden floorboards, drawing strength from the shock of contact. I had been fighting against the Boudiccate's stifling disapproval and the age-old rules of our society ever since I'd first discovered my own gift for magic decades ago. I would hardly let a few bad dreams—or lovesickness—slow me down at this most crucial moment of my life.

Today my groundbreaking school of magic for women—the brilliant, nation-shaking project that I desperately hoped to make my great life's work—was finally due to open its doors, after months of vicious newspaper attacks and political obstruction. My students—nine bright, shining young women full of potential—would start arriving before noon, along with their nervous parents and—I devoutly hoped—the final member of my own newly-hired staff, just in time for the first classes to begin tomorrow.

Everything had to be perfect for their arrival.

But I was caught hopelessly off-guard after all, by the news that my politician sister-in-law brought me six hours later, when she found me kneeling in my warm, cozy library of magic, re-ordering two different sections of books—again—with a trail of empty teacups and saucers spread across the rich green and silver carpet beside me.

"What do you mean, the Boudiccate have changed their minds?" I demanded.

I stared up at Amy, still holding a stack of books in my hands and caught between horror and disbelief. I'd consumed at least half a dozen cups of tea since I'd arisen, using my extra waking hours to double- and triple-check every final inspection, but exhaustion still clung to my bones. "They finally gave us their blessing—"

"The Boudiccate gave you their permission," Amy corrected me grimly, "and only with extreme reluctance. Now, however..." She held up the letter she'd carried into the library. "They've been provided," she said, "with new and 'compelling' arguments regarding the dangers of this enterprise, all of which must be fully considered—and can, apparently, only be decided upon after an in-person inspection."