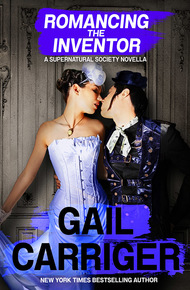 Gail Carriger writes comedies of manners mixed with steampunk and urban fantasy (plus queer romance as G L Carriger). Her books include the Parasol Protectorate, Custard Protocol, Tinkered Stars, and San Andreas Shifters series for adults, and the Finishing School series for young adults. She is published in many languages, has over a million books in print, over a dozen New York Times and USA Today bestsellers, and starred reviews in Publishers Weekly, Booklist, Kirkus, and the Romantic Times. Her debut made Audible's Best list, was a Publishers Weekly Best Book, an IndieBound Notable, and a Locus Recommended Read. She has received the ALA's Alex Award, the Prix Julia Verlanger, the Elbakin Award, the Steampunk Chronicle's Reader's Choice Award, and a Starburner Award. She has two masters degrees in archaeology and is fond of shoes, cephalopods, and tea.

Romancing the Inventor by Gail Carriger

Imogene Hale is a lowly parlormaid with a soul-crushing secret. Desperate to understand her own desires, she takes work at a local vampire hive, only to fall in love with the amazing lady inventor the vampires have imprisoned in their potting shed.

Genevieve Lefoux is heartsick, lonely, brilliant, and French. With culture, class, and the lady herself set against the match, can Imogene and her duster win Genevieve's heart, or will the vampires suck both of them dry?

This story contains women pleasing women and ladies who know what they want and pursue it, sometimes in exquisite detail.

Gail Carriger is a celebrated steampunk fantasy author known for her witty prose in series such as The Finishing School and The Parasol Protectorate. Romancing the Inventor is a standalone story set in the Parasolverse. Heroines Imogene Hale and Genevieve Lefoux must overcome class prejudice and outsmart a suckage of vampires in time to take tea. Charming and whimsical, Romancing the Inventor is the paranormal Victorian lesbian romance you never knew you needed. –Melissa Snark

In Which We Hope Vampires are Perverted

"I've taken work at the big house." Imogene spoke into the awkward silence at the end of supper. They needed to know now, because she started that very night.

Her mother looked up, exhaustion inked around eyes bright with horror. "No. Imogene, please, no. Not you. They'll take you for a drone, try to keep you forever."

"Really, Ma. Why should they? I've no artistic talent to speak of. No painting, nor pottery, nor pickling, nor what have you. I'll be perfectly fine. It's not even an indenture, simply good honest work, lighter than the fields, easier than the farm. You know how handy I am with a duster. Tall enough to reach all the difficult spots." The fact that they desperately needed the money hung in the air, unsaid.

Ma ignored both the said and the unsaid. Ignored the hunger still present at the table, though the littles had eaten all that was there. "You want a good position? Marry."

Imogene raised her eyebrows. "Positioning me on my back, yet still dusting? You're too kind."

"Don't be smart with me. That beauty of yours won't last forever, my girl. The butcher was asking after you only this morning. He's still hopeful and he's got a good business." Mrs Hale flapped a work-red hand – a weak attempt to physically dismiss her eldest daughter's disgust.

"The butcher cheats his customers." Now, if his sister offered… Imogene knew Mr Bouchard's cheating for a fact because she could do complex sums in her head and had caught him in the act. Even though she'd been distracted by Miss Bouchard at the time. Mary had the most luscious lips. Probably something to do with access to all that meat.

"Haw, look at you, high and mighty, so wise with the numbers."

"So, he cheats. All tradesmen cheat. Yes, I know, he ain't half good enough for you. None of them ever are."

Imogene closed her eyes, using exasperation to hide fear. Let her mother think her haughty. Let the men of the village think her rejections stemmed from arrogance. It was so much safer that way. "Exactly. I prefer dusters. They're so pleasingly feathery and round, and they can be twirled. No man in this village would abide a twirling."

Mrs Hale lowered her voice. Much good it did; the littles were all ears. "Be serious, Imogene, you can't go. Them's perverted at the big house."

Precisely the appeal, Imogene thought but didn't say. Maybe they would know what was wrong with her. Maybe they could fix her. Or guide her. Could never tell Ma that reason for going into service.

"They may not want a poor country lass for fangs, even one with your looks, but they'll likely want something else from you. It ain't worth the risk. You'll spoil your prospects. Such as they are, you having refused every eligible bachelor for leagues and getting long in the tooth besides."

Imogene's reply was to twist the subject. "You'd prefer we had the werewolves back? At least the vampires bring in extra work. Plus, they don't come crashing through town every ripe moon." She hid a smile at the idea of vampires crashing anything, aside from a carriage and four.

But Ma was in one of her moods. "At least you could've leashed one of them. Werewolves marry. Vampires don't."

Imogene jerked her chin up. This was partly why everyone thought her prideful, her response was all too often an up-tilted nose coupled with sullen silence. There goes Imogene Hale, thinks she's better than us. Thinks the world owes her more than a pretty face and fine figure.

Imogene didn't care because that way, they never guessed the truth behind the up-tilt. She'd rather be thought mean than bent.