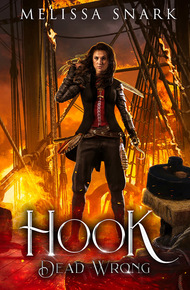 People who complicate my life earn the business end of my hook. Funny how that never seems to stop them.

Think I'm exaggerating? I stand accused of colluding with Fomorian raiders who are abducting young mermaids. And one of the Lost Boys I rescued from Neverland is being terrorized by a Faerie nightmare... A dark menace connects the two things. With the help of my pixie companion, I must solve the mystery while evading the interference of my meddlesome ex-lover.

He's sinfully distracting, but the fun must wait. All those delectable sirens need rescuing.

Villains have always fascinated me. I especially love stories with a well-crafted antagonist that elevates the conflict to the next level. I love the story of Peter Pan, but Captain Hook had always come across as a bad guy without clear motivations. What fueled the captain's infamous obsession with capturing Lost Boys and defeating Peter Pan? I asked myself that question, then I wrote Hook: Dead to Rights. Along the way I learned answers that raised even more questions. Most importantly, I discovered that Captain Jayden Hook is the heroine of her own series which continues in Hook: Dead Wrong. –Melissa Snark

"Heave!" Mr. Smee shouted from the prow of the vessel.

"Ho!" chorused the rowers, hauling back on their oars. Three tugs sailed in formation, the dinghy at point and two longboats flanking the sailboat, towlines attached to the frigate. My beautiful Revenge sat low in the sea, her hull weighted with the water she had taken on, and even with a blustery tailwind filling our sails, our speed never topped four knots.

"Ho!" shouted the teams on the bilge pumps. The seamen toiled on the windlass, heads down, bent to their task with mindless determination. The metal gears produced a harsh grating, reverberating through the timbers, piercing marrow-deep.

And so it went through the long stretch of the sweltering afternoon, as it'd gone on for days and nights before. The crew worked in shifts, but the grueling schedule took its toll. I labored alongside the crew. I spent a shift rigging and took my turn on the windlass. Sweat stung my cracked lips, and I couldn't remember the last time I'd eaten or slept.

We couldn't stop or the ship would sink....

Late on the afternoon of the fifth day, I stood on the poop deck, wrestling with a navigational chart. The map flagged in the wind, making the blasted thing near impossible to read. In frustration, I smashed the top of the scroll against the balustrade and swung my hook. Sunlight glanced off steel, and the point embedded deep in the wood with a solid thunk. Having nailed it, I pressed it flat against the bulkhead and sank to a crouch.

"Well, are we lost?" Buzz, the Chief of Faerie Engineering, asked. The six-inch pixie swung on one of my braids, seated atop a pearl hair bead. Life aboard ship presented him with challenges to making himself heard. When Buzz spoke, he shouted.

"Of course we're not lost!" I barked, though that was precisely what I feared. "I've been navigating the Neverland Sea since long before you were a glimmer of pixie dust in your papa's eyes."

"Pixies are born from a babe's first laughter and—"

"I bloody well know where pixies are got."

"Phooey, you're sourer than a barrel of crab apples." The sprite gave an irate sniff and folded his arms across his chest. He had a round face, arms, and legs, and wore a utility belt and cockleshell cogs. A wicked stinger tipped his brown-and-black-striped abdomen.

I reined in my temper. "I apologize. This entire voyage has been cursed. Peter Pan bested me twice, that ridiculous sea serpent all but destroyed my ship over a bit of treasure, and we lost crew members—"

A lump caught in my throat.

"Apology accepted," Buzz said easily. "Why haven't we reached Rackham's Cay yet? You said it was an easy two-day sail, and that was... Let's see..." He counted on his fingers. "One, four, eight days ago? Two is less than five. Shouldn't we be there by now?"

Pixies and arithmetic do not compute.

I pressed my lips together, hoping he'd give up, but then he kicked off his cogs in order to calculate on his toes.

"When Revenge is in good repair, with prevailing currents and a good tailwind, going east from Neverland to Rackham's Cay takes two days, though the westerly return requires four days due to inclement conditions."

Buzz fluttered his wings in agitation. "Are you saying we're heading back to Neverland? Are you mad, woman?"