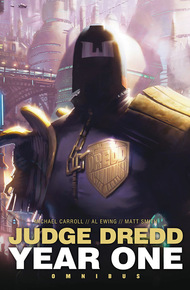 Irish Author Michael Carroll is a former chairperson of the Irish Science Fiction Association and has previously worked as a postman and a computer programmer/systems analyst. A reader of 2000 AD right from the very beginning, Michael is the creator of the acclaimed Quantum Prophecy/Super Human series of superhero novels for the Young Adult market. His current comic work includes Judge Dredd for 2000 AD and Judge Dredd Megazine (Rebellion), and Jennifer Blood (Dynamite Entertainment). Find him at www.michaelowencarroll.com

Matthew Smith was employed as a desk editor for Pan Macmillan book publishers for three years before joining 2000 AD as assistant editor in July 2000 to work on a comic he had read religiously since 1985. He became editor of the Galaxy's Greatest in December 2001, and then editor-in-chief of the 2000 AD titles in January 2006. He lives in Oxford.

Mega-City One, 2080. Judge Joe Dredd's first year on the streets as a full-eagle Judge. Bred for justice, trained in law, Dredd's no helpless rookie, but he's not the seasoned veteran we know either. Three tales follow the first adventures of the future city's greatest lawman. With an introduction by the Mighty Tharg!

The brutal murder of a Justice Department-sanctioned spy uncovers something new and dangerous in the sector's murky black market. Unless Dredd can stop it, chaos will be unleashed.

A savage killing spree results in the deaths of two highly-regarded Judges, and many consider Dredd to be responsible: a decision he made five years earlier – while he was still a cadet – has come back to haunt him.

"Wear iron, that's the rule." Paul Strader is a stick-up man, and a stone cold professional. But when he gets in over his head, he has to risk everything on the word of a corrupt lawman and break every rule he has. Every rule but one..

DREDD TOOK THE el to Vassell's apartment while Control filled him in on the dealer's history. He'd been selling narcotics since he was a teen, always an independent trader, never part of a cartel. He'd moved around the sector some in the past two decades, had a handful of aliases that he hid behind, but Vassell was his parents' name—used to live in Chuck Jones, over in Sector 80, now deceased—and seemingly the moniker he adopted the most. He was a regular user: his first bust was for Umpty possession when he was sixteen, did a month in the juve cubes. Since then he'd always been on Justice Department's radar; his MO was all over an abandoned zziz factory that was raided three years ago, and his name would perennially circulate intercepted shipments of contraband out of Banana City. The fact that he was still walking the streets was testament to a sound business head—he never dealt with the flakes that were going to get stoned, incompetently try to rob a bank and then sell their supplier down the river for a reduced sentence—and a slippery ability to either evade the law altogether or not be caught holding.

The drug snuffs his name was linked to were tangential at best, and frankly it was unlikely he was involved: a couple of slab-rats gunned down outside the southside stackers and a suspected mule minus a head found stuffed in the trunk of a mo-pad didn't sound like Vassell's handiwork. He was far too savvy to get his hands dirty. In fact, the more Dredd heard about him, the more he begrudgingly began to believe that the dealer was an unlikely fit for the Croons killing; it was difficult to imagine him putting his revenue at risk in such a way. He certainly wouldn't have anything to do with a band of idiots like the ICU.

Dredd gave a nominal rap on the door before putting his boot through it. The instinctual warning was leaving his throat as he passed over the threshold and swung his Lawgiver to bear on the apartment, but it instantly died in his mouth as he realised that the bird had flown. The place was empty, cleared out. He relaxed, holstered his gun, and cast an eye about the living space: this hadn't been a hurried evacuation, with clothes and detritus still strewn over the furniture. Possessions had been packed up and removed—what little, he guessed, there had been. This smelled of a short-term let. It was clean, Spartan, the closet containing minimal appliances; Vassell must've rented it just as a base. Dredd would call in forensics as a matter of course, but he doubted they would find anything that would give them a clue as to where the dealer had gone, or much of what had transpired within these walls. Similarly, the vendor would tell him that the rent was paid in cash, nothing to lead back to the creep.

Standing before the living-room window, Dredd looked back at Shaw, and wondered if it was possible that Vassell could've known he was being watched by Croons. Surely there was no way to discern the peeper's telescope at this distance? And was Vassell really capable of butchering the Justice Department operative, if he thought a deal had been compromised? He had no previous record for violent crime. So if Vassell wasn't in the frame, could those he was dealing with be responsible? Perps he hadn't encountered before: vicious, brutal, ruthless, a new gang moving into the sector...

Dredd paced, imagining Wallace, one of his old Academy tutors, murmuring in his ear: extrapolate, extrapolate...

Creeps that could be aware that they were being monitored from a block away. Creeps that could gut a man, and let those that found the remains be aware of who had done it with a symbol painted in blood. Creeps that could've quite possibly scared Vassell enough to have vacated these premises. The more Dredd ran with the idea, the more he felt that the dealer had got himself entangled in a transaction that was out of his league. In the Judge's mind, all the signs pointed to non-humans. An alien outfit, looking to stamp their mark on the underworld; only they could have the sensory or psychic perception to pick up on Croons watching them from another building.

Eye See You... Perhaps McCready hadn't been far off the mark.

He had to check out Croons' last peep that the teks had managed to reconstruct. He left the apartment at speed, and tore back down to his Lawmaster parked outside.

Dredd accessed the bike computer and called up the file: it was shot at night, so the visuals were crackly and indistinct, and while the equipment had tried to enhance the picture through heat signatures, penetrating Vassell's closed blinds, it hadn't achieved much more than capturing five humanoid shapes standing in a loose circle. There was nothing in their manner to suggest that four of them were off-worlders, but there was also the possibility that they could be shapeshifters; after all, Croons had opened his door to them, he hadn't been intimidated by their presence.

The telescope had a sonic magnifier, pushed to the max for such a distant eavesdrop, hence the audio was muffled. Dredd strained his ears, trying to pick sense out of the white noise.

It faded to a hiss as the silhouettes moved further into the apartment. The accents and vernacular had all been Mega-City; no one sounded like a visitor to the area, though such things could be imitated by someone seeking to infiltrate the populace, of course. Vassell appeared relaxed in their company and excited by what was being discussed; clearly, he was impressed by whatever narcotic he was planning on distributing for them. There had been no indication that they knew they were being monitored, and were going to take Croons out before he could relay any information he'd gleaned to the authorities.

Dredd gunned the Lawmaster's engine and peeled onto the sked. First things first: to put out an APB on Travest Vassell, and pull the dealer in for questioning. He was convinced the creep was not guilty of murder, but he was partnered up with some newcomers on the scene, and Dredd wanted to know who they were and what they were bringing into his city. Aerial units could be fed Vassell's mugshot, see if they couldn't capture him at one of his regular haunts, and Dredd thought he could also swing by the new Psi-Division, ask one of their remote viewers to cast out a line, pick out his face in a crowd. Strange methods, he had to admit, but you couldn't argue with the results the fledgling department had so far attained.

Meanwhile, Dredd had an appointment with one of the dealer's known associates, who he anticipated was going to relish helping the Law with its inquiries. He twisted the throttle and weaved in amongst the traffic, heading downtown.