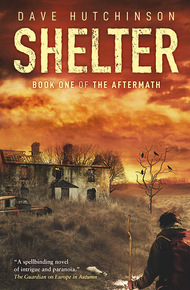 Dave Hutchinson is a science fiction writer who was born in Sheffield in England in 1960 and read American Studies at the University of Nottingham. He subsequently moved into journalism, writing for The Weekly News and the Dundee Courier for almost 25 years. He is best known for his Fractured Europe series, which has received multiple award nominations, with the third novel, Europe in Winter, winning the BSFA Award for Best Novel. He lives in north London with his wife and several cats.

Shelter - The Aftermath Book One by Dave Hutchinson

For Adam Hardy and his small Berkshire community, hardship is all they've ever known. For almost a century after the coming of The Sisters, the survivors of rainswept England have huddled in their tiny communities, scavenging the ruins of the old world. Now, finally, the Long Autumn is coming to an end, and society of a kind is starting to rebuild.

But for how long? A new tyrant, Frank Pendennis, has risen in the east, while rumours of something even worse are coming from the north.

The struggle to inherit the world is just beginning…

THE BRIDGE ACROSS the Thames at Streatley had washed away long before Max was born; years of floods had swollen the river and simply eaten it away, along with most of the other bridges both upstream and downstream. At some point, an enterprising group of people had come along and set up a ferry. They had cleared the main road through the Gap where the river cut through the Chiltern hills. And then they set up shop taxing travellers.

Those had been wild days; Max's grandfather had told him of bands of armed and desperate people besieging the village, of firefights between the people operating the toll and travellers who thought they could go any-damn-where they wanted and didn't see why they should pay for the privilege.

These days, things were quieter. Max arrived near dusk and joined a line of wagons and riders waiting to board the ferry. He could hear, on the other side of the river, the bells of St. Thomas's calling the faithful to evening prayer.

A group of men armed with shotguns and crossbows guarded the slipway down to the big flat-bottomed boat that winched itself from bank to bank. When Max reached the head of the line, one of them came up and nodded hello. "Howdo, Max," he said amiably.

"Off on your travels?"

"Going to Blandings." Max reached behind the seat and brought out a bottle of homebrew. He handed it down.

"Give the old woman my regards," said Terry, taking the bottle.

Max drove on into Goring, where stallholders were just packing up after market day. There was a pub on the other side of the village – no one knew what it had originally been called, everybody just called it The Goring – and here Max pulled off the road, drove round the back of the main buildings to the stables, left the wagon in the hands of one of the ostlers, and went inside.

The bar was full of farmers and traders, most of them wearily drunk after market day. Max ordered a beer, nodded hello to the few faces he knew. A young woman brought his pint, and he beamed. "Hallo, Evie," he said. "Room for a little one?"

Evie was small and slim and blonde, her hair tied back. She looked tired. "Should do," she said. "Most of these old lads will be going home in a bit." She looked out into the bar. "I hope. How's the family?"

Max had been coming here for... oh, longer than he wanted to remember. Evie's parents had both died within weeks of each other during a particularly bad flu season which had swept through the area a few years before, leaving her alone to run the pub.

"They're fine, thanks. Been busy?"

She grunted. "Market day. We've got some stew on; that do you?"

He grinned. "That'd be smashing, thanks, Evie. I'm starving."

"Yeah," she said, looking him up and down. "Like Rose would ever let that happen."

Max took his pint over to a table at the other side of the bar, where he joined a couple of gaffers he knew vaguely.

"Been talking about things up north," said one, a ruddy-faced man called Bob, when pleasantries had been exchanged. "You heard anything?"

Max shook his head. "I saw something the other day, over to Letchlade. Houses burning, people on the move."

"Bandits," grunted the other gaffer, one of the Robinsons from up towards High Wycombe.

"I don't know about that," said Max, trying his beer. The Goring ran its own microbrewery, and produced the best beer in the Hills. That was what Evie said, anyway.

"Our Rita's husband has people up Oxford way," Bob said. "He's not heard from them in months."

Evie came over with a steaming bowl of mutton stew and a chunk of bread and put them in front of Max. "They had boats," he said, dipping his spoon into the stew. "The people I saw."

"Every bugger down there's got a boat," Robinson said. "One day it's going to flood for good."

"He's been saying that since we were boys," Bob told Max.

Max chewed a mouthful of stew, washed it down with a sip of beer. "Any idea what exactly's going on up north?"

Bob shrugged. "Something in the Cotswolds. Don't know what."

"Cotswolds," Max mused. "Bit of a distance, that."

"If they're messing around in Letchlade, that's not such a distance," Bob pointed out. "If they decide to come south, they're going to have to come through here."

THE GORING'S ROOMS were small and cramped, but they were clean and dry and the kitchen provided plenty of hot water for washing and a big bacon and egg breakfast the next morning. Some of the slates on the roof had been loosened during a storm the week before, and Max spent a few hours up a ladder repairing them to pay for his board before setting out again.

The old roads were nearly unusable. Almost a century of rain and frost had patiently cracked and lifted the tarmac or washed it away altogether. Main roads were still choked with the rusting wrecks of ancient cars and lorries, almost hidden by weeds and overgrowth.

The preferred option for getting about was horseback, or failing that on foot, but in some places – the Chilterns was one shining example – two generations of settlers and farmers had worked to keep at least some of the roads clear and open for wagon traffic. So it only took Max half the day to travel the well-used road between Goring and Wallingford.

Just outside the town, he turned off down a side road, and a few minutes later, he reached a pair of tall iron gates set into a high brick wall. There was a nest of sandbags atop each of the pillars on either side of the gateway, and attached to the wall beside the gates was a sign which read, BLANDINGS. FUCK OFF. He drew the wagon to a stop and waited, and a couple of minutes later, a figure poked its head over the wall.

"It just occurred to me that there's nobody round here who can read this sign, you know," Max mused out loud.

"For the illiterate," said a voice from one of the sandbag nests, "we have Mr Browning." And there was the sound of a heavy machine gun being cocked.

The figure on the wall waved and dropped down out of sight. Another figure rose from behind the sandbags. "Mr Taylor," said Betty. "And what can we do for you?"

"Brought you some bacon."

Betty grinned. "I knew there was a reason I liked you. Come on in. Andrew?"

Andrew, a tall, slim young man in jeans and a black pullover, with an L85A2 assault rifle slung over his shoulder, unlocked the gates and cranked them open.