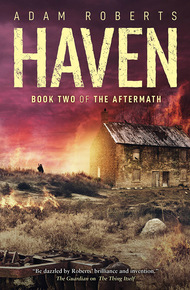 Adam Roberts was born in London, studied at Aberdeen and Cambridge, and is now professor of nineteenth-century literature at Royal Holloway, University of London. He is the author of 12 science fiction novels, including By Light Alone (2011) and Jack Glass (2012).

Young Forktongue Davy has visions; epilepsy, his Ma calls it. He's barely able to help around the family farm.

But something about the lad is attracting attention: the menacing stranger who might be the angel of death himself; the women-only community at Wycombe; Daniel, sent by the mysterious Guz.

They all want Davy for their own reasons.

But what use can he be to anyone? He has visions of flight, but how can flight ever be possible in this shattered world?

A simple farmboy, caught up in events beyond his power to control—but his visions may be the key to the future.

"Where have you been all day?" Agnieszka asked him.

"I needed to get this lamp," said Hat. He held up the lamp. "May I put it close to the fire, to dry out the wick?"

"Where did you get that old thing? It's filthy. Did O'Connor sell you that? I hope he didn't charge you too much."

"Maybe you can rub it and get a genie out of it." But she permitted him to place it near the fire, and even cleared away the scrum of her regulars to let him dry out his clothes. They didn't get completely dry, of course, but as he sat there wrapped in a blanket, drinking a beer, he felt some small sense of satisfaction. "If you don't mind, Agnieszka," he said, "I'll smoke a cigarette."

The whole room went quiet when he lit up the fag—the authentic aroma, the ancient scent of it. Men and women stood there drawing his second-hand smoke with their nostrils. The whole room seemed to relax. The mood lifted.

"There's a genie, after all," said Agnieszka. "You know, you'd dry your hat quicker if you took it off and put it by the fire with the rest of your clothes."

The next morning he was up early and down at his boat. The temporary seal had held, and the boat was still floating—much lower in the water than Hat would have liked, but still. He had his lamp and tinder in a bag. The Monsoon rain was light but steady, and there was a greenish-blueish quality to the daylight.

First order of business was to get the big, improvised plastic bladder out of the way. This took longer than he had anticipated. The whole structure had deflated by two thirds overnight, and was floppy inside the hold. But getting the last of the air out proved an onerous business. It would have been simplest just to rip the whole thing with a knife, but Hat had promised Plastic Bert that he would get the fabric back to him with as little damage as possible—it had been that, or else actually buy the whole lot outright, which was much more than Hat could afford, credit or otherwise. So he was reduced to massaging the whole dying slug, squeezing out air in a series of gushy puffs and oofs and farting sounds. Eventually he got the whole thing bundled up into a more or less portable roll, and pulled it onto the deck. It was filthy with river mud and crap, but that didn't matter. Hat had become mired with the same substances as he wrestled with it. The least of his concerns.

With the plastic out of the way, Hat got his lamp out of its bag, lit it and hung it from the ceiling. The inside of the boat was a mess. Of course he had expected this, but it was still a shock to see how badly things had been shaken up.

He was standing in a foot-or-so of water. A great quantity of mud had come in through the breach when the boat was on the river-bed, and all sorts of objects were scattered everywhere.

The first order of business was to mend the breach. That meant carpentry, and it took Hat ten minutes to locate all the tools—they'd somehow ended up in the rear compartment. It also meant cannibalising some of the boat's own wood. Hat had previously decided that the door to the rear compartment might as well go: he could get a new door when he was up and running again. So he unscrewed the portal from its hinges, broke it into component planks with a chisel and set to work sawing, fitting, and nailing. He got one layer in, behind the tarp, using a file to make the fit with the ragged edges as close as possible. Then he painted a great quantity of waterproof putty into the joins—a homemade concoction, this, rendered from bone glue, plastic fibres and tree resin, and very much a temporary solution to any given leak. He needed to leave this to set, and anyway it was lunchtime. His larder had remained closed the whole time, and although water had, obviously, got in there, the cured meats still seemed edible. He ate and drank and finished off his small store of soggy nuts, since he couldn't realistically dry them out and if he didn't eat them they would go bad.

Then it was back to the breach, and a second layer of wood carpented into the hole.

It took him almost all day, but he finished. The boat was still leaning forward, its stern a foot or so higher than its bow, because of the weight of the mud and the way the water naturally lay deeper at the front of the slope than the back. He could pump the front compartment clean tomorrow, and begin the tedious and doubtless drawn-out job of scooping the mud out then too. It was enough for today.

It was only as he stood there at the end of that long day's work, looking forward to appraising the sheer mess that he would have to deal with that he noticed for the first time something that shouldn't have been there. A shoulder.

It was unmistakeably a naked shoulder, rising about the flat murky layer of water like a dolphin's back.

The first thing that occurred to Hat was: I had been working in this space all day, inches from a dead body, and I never even noticed. He was cold and wet, but the shiver that trembled through his body had nothing to do with either of those facts.

He went over and touched the shoulder. It turned under his pressure, and the body went onto its back. The front was covered in mud and grime, but a number of things were easy enough to see as the face came up through the water. It was a young person. It was female. It was naked. It was dead.