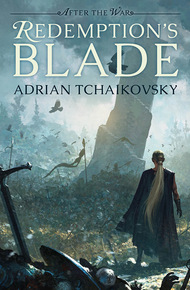 Adrian Tchaikovsky is the author of the acclaimed ten-book Shadows of the Apt series starting with Empire in Black and Gold, published by Tor UK. His other works for Tor UK include novels Guns of the Dawn, Children of Time, Children of Ruin and the Echoes of the Fall series starting with The Tiger and the Wolf. Other major works include Dogs of War, Redemption's Blade, Cage of Souls, the Tales of the Apt collections, and the novellas The Bloody Deluge, Even in the Cannon's Mouth, Ironclads and Walking to Aldebaran for Rebellion. He has won the Arthur C Clarke and Robert Holdstock awards.

After the War Book One - Redemption’s Blade by Adrian Tchaikosvky

THE BATTLE OF Bladno was supposed to be a turning point in the war. The army of the Grand Alliance had fully mustered, meaning that the neighbouring kingdoms of Cherivell and Forinth had finally stopped fighting each other and united against the Kinslayer, together with a handful of expatriates and a penal legion from Tzarkand. The Kinslayer, for his part, had finally grown the dragon Vermarod the Invincible to full size and was cackling with glee, ready to unleash the beast. Bladno—formerly a prosperous town, but now known just as a battlefield—had been seen by everyone as the make-or-break of the war.

Which same war had then rumbled on for another six years.

From the Kinslayer's perspective, the Grand Alliance lost decisively and the armies of Cherivell and Forinth had effectively been stripped of any ability to stop him swanning over the borders as easily as he pleased. From the free world's perspective, Vermarod the Invincible was spectacularly dispatched by Celestaine, the Champion of Forinth, and the Dark One had sunk so much of his power into the enormous dragon that even he was forced to sit back and take stock. For the next three months neither side had known what to do; there had been so little fighting it had almost felt like peace.

Celestaine remembered. Everyone had been trying to go for the eyes, as the absurd reptile had blundered through the battlefield, trampling soldiers of both sides by the hundred. Vermarod had been bred to relish human flesh, armed with acid spit and withering breath, but once the battle got underway the beast had spooked and floundered about, bringing ruin to just about everyone. "The eyes, the eyes!" the generals had shouted, and countless archers had met their end under the corrosive spray of the frantic monster's wheezing as they tried for a shot. Then Celestaine had clambered up a leg—for reasons of His own the Kinslayer had built the thing low, like a lizard—and run up until she stood on the plateau of its head. There, she had driven her sword to the quillons into its skull and ended the miserable monster's rampage. But then, one benefit of a Guardian giving you a sword that cuts through anything is that it will actually cut through anything, dragonbone included.

She had told herself, I remember, all the way down the road back to Bladno, but when she got within sight of the place, she didn't need to remember it after all, because Vermarod was still there. The bones of the Kinslayer's great war-beast dominated the landscape, its spine curved in a great half-circle, its ribs arching into the sky like curved towers. There was no hide left on it, which was a shame for personal reasons, but someone no doubt still had some as a souvenir. After all, the stuff was impossible to sew, flame-proof and immune to decay, so what would anyone have done with all of it, exactly?

For there were people at Bladno. There were quite a lot of people, in fact. All the final armies of the free world had come this way, when the tide of battle turned and the Kinslayer met them for one final fight at the gates of Nydarrow, his greatest fortress. Most of the survivors had come back this way and got no further. Many had no homes to return to, nor purpose, now their task was done. Celestaine knew the baggage trains that armies accumulated, and the new community at Bladno looked like the baggage train of the gods themselves, a thousand tents, a hundred slanting shacks built up against the bones, a handful of real buildings already emerging from the human wreckage. She saw a smithy and the great covered square of an Oerni-style market, while a well-known taverner with pretensions of grandeur had set up in Vermarod's skull and festooned it with flags and banners. Celestaine felt an unwanted stab of pity for the fallen beast. At least it looks like he's having a good time at last.

"Did you see the thing when it was alive?" she asked the companions who loomed at her shoulders.

Nedlam hadn't and didn't seem interested. Heno tugged on the silver of his beard. "Not this one. I saw some of the smaller ones bred." The deep rumble of his voice buzzed under Celestaine's chestbone and she twitched her shoulders. "Your man is here, this pity-creature of yours?"

"Don't call him that," she snapped at him immediately, and heard his impatient hiss of breath. Heno wasn't good at empathy. It was something she was trying desperately to teach him, something she was hoping he could actually learn. She had made quite a bet with the world on that score. "But here, yes. There's a community of his people nearby, on the Forinth side of the border. This is the biggest landmark for miles around. Everyone can find their way to Bladno these days, and once you're in Bladno, everyone can find their way to the Skull Cup."

Nedlam, who hadn't heard the name of the place before, found it hilarious, but then it was probably pitched at about her level. Celestaine signed and slowed her horse, putting a little pressure on the reins until the animal consented to turn a little to let her look at her friends.

Friends? Do I call them that in open conversation? What, then? Don't know. People I can't in all conscience get rid of?

Celestaine was, according to the bards, a 'silver beauty': skin like milk, blue eyes, hair so pale as to be white. The bards, most of them, had never actually seen her out of her armour, despite several offers from the more incautious rhymers. But yes, she was fair and pale, though her hair had been hacked short to go under her helm, and was now growing out into an uneven mullet and getting in her eyes. Her face was long and, when not animated by any particular emotion, tended to settle into an expression of narrow-eyed disdain that some men took as a challenge. Though in her experience only the most tiresome of them, which was a shame. She was tall, though: long-limbed and broad-shouldered, and there was a lot of the war left in the way she held herself or sat on a horse. On the road, a quite large band of brigands had erupted out of the undergrowth around her and her companions and then immediately thought better of it and gone peaceably about their business. One of them had even muttered an apology. But perhaps that hadn't been her; probably it had been the others.

They had shrouded up, this close to Bladno. Once they'd started getting the expected looks from the other traffic on the road, both of them had put on their cloaks and hoisted up their scarves until only their small hostile-looking eyes could be seen in a little strip of blue-grey skin between nose and brow. It was not a disguise. There really was no disguising what they were.

"You're doing it again," Nedlam pointed out, tapping her own head through the hood. "Thinking. Always leads to ruin."

"Someone's got to," Celestaine pointed out. "Look, we'd better get off the road and make a plan."

"Wood," Celestaine corrected. "We'll camp out of sight until it's getting dark, then I'll go in and test the waters. Bladno's going to be crawling with veterans. Who knows how they'll take to a couple of Y… you."

He chuckled darkly. "Celest, of all the monsters in creation, you don't need to tell me about the power of old habits."