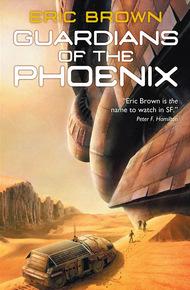 Guardians of the Phoenix by Eric Brown

For ten years, Paul has scrabbled for survival among the sand-shrouded ruins of the once-great city of Paris. The seas have dried up, deserts cover much of the Earth's surface, and humanity has been all but annihilated, as much by the drought as by the nuclear and biological conflicts following the great Breakdown.

Desperate bands of humans still survive. Some scrape a living in the remains of shattered cities; others resort to murder and cannibalism to survive. When Paul is rescued from one such group of killers, he joins his benefactors in their journey south in search of water and salvation.

Guardians of the Phoenix tells the story of the last survivors on planet Earth, their desperate fight for survival and their last hope to save the world.

PAUL WAS CLIMBING the tower to the lizard traps when he saw the girl in the red dress.

The sun rose over the eastern horizon, silhouetting the remains of the shattered city. Later in the day the metal of the tower would be impossible to touch, and if he did so he'd leave a layer of skin on the girders. He'd made that mistake once, a long time ago, and had suffered for days with pain and then infection.

He climbed the cross-pieces and curving spars with practised ease, reaching above his head, gripping girders and hauling himself higher and higher above the desert lapping at the foot of the tower. It was as if the builders had seen into the future, anticipated Paul's daily quest for food and incorporated design features which would make scaling the mammoth tower all the easier. Flanges, giant bolts and cross-pieces seemed purpose built hand- and foot-holds, allowing Paul to scale the tower to its shattered, buckled mid-point with the ease of the lizards he was seeking.

He reached the first cross-piece, rolled onto it, and squinted up to the horizontal girder where he'd set the traps. He saw that a dozen of them had sprung, and smiled with relief.

At sunset every day for years he'd baited the traps high on the tower. In the early days he'd used flies, insects and even small pieces of lizard meat as bait. Nowadays he didn't come across many flies or insects, and lizard meat itself was too valuable to use. On Elise's suggestion he'd started using pieces of his own dung, sceptical at first that the lizards, stupid though they were, would be attracted to the hard, dry pellets. But they had been as desperate for sustenance as he was, and from that day on he'd set the traps with his own waste, cheered by the circular efficiency of the ploy.

He grabbed the arcing girder overhead and climbed. When he reached the next cross-spar he paused again, sitting with his legs dangling. Long ago he'd taken Elise's words to heart and imposed order and regimen on his days. He did things at a certain time because that was the best time to do them. Efficiency gained results. An ordered day not only meant survival, but imposed purpose on the long hours of the long days that stretched into the future. Elise had seen many people go mad from lack of purpose. Without routine, she'd told him, without strict adherence to small, daily duties, a mind could dwell on the future, on what might be – and that way led to despair and finally madness.

Every day at this point Paul paused in his climb to catch his breath and take in the city sprawling beneath him. Or rather what was left of the city.

Over the years he'd watched the slow encroachment of the sand. From street level it was almost impossible to discern. He'd noticed, little by little, a thicker patina of dust on everything, then a fine coating of sand – then drifts that created beautifully geometric curves at the intersecting angles of streets and buildings. The accretion of the fine yellow sand was so gradual as to be almost unnoticeable, like the slow progress of the fiery sun as it climbed up the sky. But from up here he could monitor the street by street creep of the desert, note the slow sinking of the shorter buildings into the sea of sand. Now only the tall apartments and office blocks, and some of the cities' older monuments, showed above the parabolic sweeps and curves of the dry wasteland.

The monuments, for their part, had suffered too: they might have stood for centuries, proud and regal signifiers of grand events of a culture long dead, but the past decade had done what previous centuries had failed to do. The features of statesmen and soldiers, their proud staring faces, their pens and swords, had been sand-blasted and reduced to anonymous nubs and stumps.

When Elise had been mobile, and the sand had allowed better progress through the streets and by-ways, she had taken him on a tour of the city's monuments, describing the once great men and their contribution to civilisation. Paul had listened diligently, but did not admit to her that the history lessons meant nothing to him.

He saw the city now, but was looking for more. He was searching for movement, other than that of the wind-swept veils of sand that drifted across the open spaces: he sought the scurrying of animals, the flight of birds. He rarely saw animals these days. A year ago he'd spotted a dark shape skulking through the ruins, and that night set a trap of lizard meat for the beast, reckoning the sacrifice of a small animal for one ten times its size well worth making. The following morning he returned to the trap to find the animal snared, and he'd been overcome by elation at the thought of the food it would provide for two or three days. He'd slit its throat and carried the body proudly back to the basement he shared with Elise. She'd smiled as he dropped it before her, and she reached out and stroked its sable pelt. "Do you know what it is, Paul?"

He didn't recognise the animal from the many books he studied with Elise. "No."

"Once upon a time they roamed wild in packs of hundreds," she said. "And before that they were man's best friend. It's a dog."

The animal was thin, but its meat had been the best Paul had tasted in years.