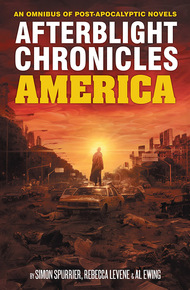 Rebecca Levene has been a writer and editor for fifteen years. In that time she has storylined Emmerdale, written a children's book about Captain Cook, several science fiction and horror novels, a novelisation and making-of book for Rebellion's Rogue Trooper video game, and a Beginner's Guide to Poker. She has also edited a range of media tie-in books. She was associate producer on the ITV1 drama Wild at Heart, story consultant on the Chinese soap opera Joy Luck Street, script writer on Family Affairs and Is Harry on the Boat? and is part of the writing team for Channel 5's Swinging. She has had two sit-coms optioned, one by the BBC and one by Talkback, and currently has a detective drama in development with Granada Television.

Simon Spurrier is an award-winning writer of novels and graphic novel fiction. He's worked extensively for the UK's talent-factory title 2000 AD, has published novels with Abaddon, the Black Library and Black Flame, and has won a series of accolades and prizes for screenwriting. He's worked as a cook, a bookseller, a BBC Art Director and a film student. He lives in London because the night sky is a far better shade of green than anywhere else.

THE CULL ROSE FROM NOWHERE...

It swept across the world like the end of times, a killer virus that spared only those with one rare blood type. Now, in the ruined cities, cannibalism and casual murder are the rule, and religious fervour vies with cynical self-interest. The few who hope to make a difference, to rise above the monsters, must sometimes become monsters themselves.

This omnibus combines The Culled by Simon Spurrier, Kill or Cure by Rebecca Levene and Death Got No Mercy by Al Ewing.

THE CULLED: Even before the plague, he was a weapon, cold and brutal; and the Cull took away his one shot at regaining his humanity. Now, deep in the squalor of London, he receives a signal, and a flicker of hope. But the source of the signal is half a world away, and he must fight gangs, collectors, and the powerful Church of the New Dawn to get there.

KILL OR CURE: Spending five years locked in a secret bunker, with only the dead for company, is enough to drive anyone mad. But Jasmine's crazier than most; she survived the Cull, but the Cure's worse, leaving her with a Voice that whispers at her to do terrible things. Rescued by the rulers of the New Caribbean, she is sent to investigate a second plague.

DEATH GOT NO MERCY: Cade didn't exactly care about people, but if someone he almost cared about was in trouble, he'd help if he could. If that meant taking on religious maniacs, suited cannibals and hippies who dealt out free love and fast death... well, I'm kind of runnin' my mouth here. This ain't a peaceful story, and Cade... Cade wasn't a peaceful man.

The Duchess laid down another card, her body shifting on the edge of Cade's eyesight.

He didn't even really know what the hell he was carving.

Cade was considering standing up and turning the damned card table over when he heard a rumbling noise from down the track, and turned his head to see Woody's pickup rolling up next to one of the empty trailers, saving him from his thoughts. The Duchess looked over and waved as Woody opened the driver's door and stepped out, then walked around to the back of the truck. Cade figured something was wrong right then.

Generally, Woody brought the insulin a box at a time, on the passenger seat. But now there was a big crate of the stuff in the back of the truck.

The Duchess's smile left her face, and she looked puzzled instead – puzzled and a little fearful.

Woody was breaking the routine.

Woody still lived in the same house over in Muir Beach, a couple miles away from the trailer park, and he spent most of his time there. He was a solitary man, even before, and since his mother died along with the rest of the folks in Muir Beach he didn't seem to need or want any company, beyond the time he spent with Cade and the Duchess. Sometimes he wouldn't come to the park for days, and when they'd head into Muir Beach to find him and drag him out for a beer in what was left of Muldoon's – another ritual they tried to keep to every week at least – he wouldn't answer his door. Him bringing the insulin to the trailer park every week was a way for the Duchess to keep an eye on him.

Woody was a fella who needed taking care of, she figured.

His hands shook as he tried to get a hold of the big crate. They shook most of the time, these days.

Cade stuck his knife in the ground, got up and walked over. The crate wasn't that heavy, but Woody wasn't much of a physical specimen and besides, he had the shakes pretty bad. Cade figured it was best he took hold of it.

By now the Duchess was looking worried. She was scratching lightly at the needle marks on her arm, saying nothing as Cade laid the crate down inside her trailer. Cade figured he'd best ask the question.

Cade was a man of few words.

Woody sighed, looking down at the ground.

Cade narrowed his eyes. The Duchess spoke up, a tremor in her voice.

Woody shook his head, not looking her in the eye. "I thought so too, I did. But, uh, the crates in the back room of the store, the ones that have insulin written on the side, they're... well, they're all full of eye drops. I guess they ran out of eye drop crates at the factory, or there was some sort of mix-up or something... anyway, that's the last. There's sixteen boxes in there."

The Duchess shook her head, getting to her feet. She was blinking slowly as it dawned on her.

The Duchess had known the insulin would run out eventually, but she figured they had enough for a year, maybe two. Long enough to work something out.

"Woody, that'll only last about four months. What happens after four months?" There was an edge of panic in her voice.

Cade shrugged. No sense he could see in panicking. "We get more."

The words hung in the air for a moment. Woody swallowed. "Um, yeah, that's why I brought the whole crate up in one go. See, uh... I figure there's going to be more in the city, so I'm taking the truck down that way, and loading some boxes up..."

The Duchess looked at him, blinking. "Jesus Christ, Woody, you wanna go down to Sausalito?"

Woody shook his head. "Sausalito's gone. I was thinking Frisco."

Cade looked at Woody. Woody who was out of shape, who still lived with his mother's ghost. Woody and his shaking hands and his twitch that wouldn't go away, talking about how he was going to take the pickup truck down all the way into San Francisco.

Ed Hannigan had taken a car down that way to see how things were there, about a couple of weeks after the last broadcasts finished and even the emergency band on the radio wasn't giving anything but static. He never came back.

After a couple more weeks, Woody had driven after him a ways. He'd stopped when he came to a skeleton hanging from a sign by the side of the road. He told Cade later there was an orange glow lighting up the horizon.

Since then, the three of them had pretty much given the cities up for lost, and now Woody Dupree wanted to go down and load up a few crates of insulin, because he felt guilty. He was terrified. You could tell just by looking at him.

Cade shrugged his great shoulders once, reaching to scratch the hairs at the back of his neck. It was pretty damned obvious Woody was about to get his fool self killed.

Woody looked at him like a drowning man looking at a rope. He shook his head, licking dry lips. "No, it's okay. I should have checked the crates earlier. It's my fault, I'll..."

Cade wasn't a man you felt comfortable arguing with, at least not when his voice carried that tone to it. Woody looked down at the ground. "Are you sure?"

The Duchess spoke, her voice dry as Martini. The scare had gone out of her, and Cade was glad of that. "If it's my life on the line, I want Cade to go. No offence, Woody."

Woody nodded. "I'll..." – he swallowed hard, unable to keep the relief off his face – "I'll leave the truck here. If... if you drive down to the town tomorrow morning, I'll help you load up with stuff." He licked his lips again. Nervous. "You know. From the gun store."

"Sure." Cade said. He didn't smile, but he probably would have made an attempt if he'd thought of it, for Woody's peace of mind as much as anything else.

Cade was never what you'd call the smiling type.