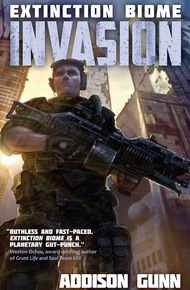 Extinction Biome is, of course, the brain child of jungle warrior, revolutionary, counter-revolutionary and outdoorsperson Addison Gunn. But who is Addison Gunn? Addison's too damn busy to answer that. Instead Gunn's wrangled some of the best new talents in the genre to pen this exciting new series.

EARTH WAS NEVER OURS

Four years in the military, training for a war that never happened, left Alexander Miller disillusioned and apathetic. Now, as second in command of COBALT, a corporate bodyguard unit for the biotech giant Schaeffer-Yeager, he's little more than a glorified chauffeur to the wealthy elite. But times change.

A threat from the ancient past has reawakened, and like a Biblical plague it threatens to consume every ecosystem on Earth. Hordes of parasite-infected humans riot against the increasingly powerless authorities as vast fungal blooms destroy crops and terrifying beasts stalk city streets.

The last time this happened, T-Rex found itself on the menu. But mankind's got more than teeth – it's got guns. Miller and the men and women of COBALT are pressed into service to fight the onslaught, but they have no idea how cut-throat their corporate masters can be...

DEAD PIGEONS WERE scattered across the streets and sidewalks in a threadbare carpet, baked dry, almost mummified by the heat in a matter of days. Say what you wanted about global warming and climate change: at least it had finally solved New York's pigeon problem.

Something the size of a Great Dane nosed through the crumbling bed of bones and feathers with its misshapen skull. The creature seemed to be all teeth, all jaw, built from evolution's pre-mammalian leftovers. Ridges of bone knobbled its skull, leaving the creature's leathery face looking warty and distended. It peeled its lips back, revealing snakelike fangs, and snatched something small and squealing from amidst the pigeons—it looked like a particularly long-bodied rat, but rats didn't have armour-plated skulls like prehistoric fish.

The terror-jaw whipped the little thing side-to-side, muscular neck straining, and with one last flick the rat-thing's spine snapped and the squeals ended. It looked back, as if for approval, toward Miller's target—a dirty, scruffy, ungroomed white man in his late thirties.

You couldn't tame the new wildlife. Everyone knew that—the damn things were as wild as lions, and a damn sight older—but that didn't seem to matter to the target. He was filthy, with some kind of scabrous orange growth crawling up his shoulder.

Gingerly, Miller reached up and scratched his nose, safe behind the limo's locked doors and parked in the shade of an alleyway. He had no desire whatsoever to grab the target, but there weren't any other untried options on the table, and a hostage exchange wouldn't work if Miller didn't take hostages...

Miller leaned forward in his seat, pulling his Gallican .45 from its concealed holster under the back of his Louis Vuitton suit jacket. He hesitated, glancing across the limousine at du Trieux. "When this goes wrong, you be ready to pull my ass out of the fire."

Du Trieux nodded seriously. Morland, behind her in the back seat, gripped his shotgun more tightly. Miller knew he could rely on du Trieux in a pinch—she was a French-Nigerian ex-jihadiyya, who fought back in the early '30s to liberate Syria from Daesh and the rest of the false caliphate. She could be a cool-headed killer if she needed to be. But Morland? Morland was a kid, barely twenty, from the south of England. Sure, the 'kid' was an imposing six-foot-eight, but that didn't change the way his hands were sweating. No experience at all—which was why Morland was in the limo, while the team's second Englishman was on his own with a rifle on a rooftop.

Miller tapped his earpiece. "Doyle? Get ready to kill the dog."

"It really isn't a dog," Doyle replied, his clipped Oxford English buzzing through the earpiece's low-bandwidth encryption. "On target."

Miller gnawed his lip, hovering a fingertip over the door's lock. "Trix, you take the wheel. Morland, be ready to receive the hostage." In other words, stay in the back seat and don't shoot anybody.

The kid just about melted in relief.

Miller shared a look with du Trieux, and got out of the limo's sweet air conditioning and into the oppressive heat. And the smell, Jesus. Maybe parking in an alleyway hadn't been such a good idea. He clicked the door shut.

The terror-jaw out in the street jerked up, alert, twisting its head side-to-side, presenting its ears—fissures in its skull—to search for the origin of the sound. It saw Miller and bared its teeth. As he approached, leaving the stink of the alleyway for the stench of the street, it ducked its head and raised its rump, like a cat ready to leap. The abduction target twisted around, lifting his shaggy hair out of his eyes.

"Doyle?" Miller asked, finger on his earpiece, panic edging into his voice.

The shot tore open the asphalt inches from the terror-jaw's forepaw. The animal backed up with a startled jolt, looking up toward the source of thunder... and then bounded for Miller, jaws wide.

Miller got off two shots with the Gallican—a double tap, centre mass at the charging animal, but broken bones and blood hardly impeded the thing. Its wet throat was scarlet behind the grille of its fangs, ravenous, eager. Miller reflexively pushed his gun out at the terror-jaw, heart skipping a beat, then spasming as something hammered the creature's head sideways. Blood was everywhere.

The only other time Miller had seen a terror-jaw from this close was around two years ago. His dad called, complaining about seeing weird things out on the ranch. At first Miller had figured it was just nerves, his parents weren't used to rural life, they should've taken their retirement in the suburbs. Then he visited and saw a sickly little creature that one of the cows had stepped on.

Back then, four years after he'd left the army, the creatures of the Archaeobiome were still a scientific curiosity—it seemed that the entire ecology slumbered over hundreds of thousands, maybe millions of years. Researchers had called it a kind of migration, through time rather than space. Instead of travelling from place to place in search of food, the creatures just laid eggs or hibernated over millennia until droughts ended and deserts turned to jungles. Nobody had seriously considered whether or not the reawakening ecology could be some kind of threat. Why would they? At that point the biggest terror-jaws anyone knew about were maybe the size of a cat.

Now, two years on and a healthy chunk into Miller's sixth year as a bodyguard, the only thing unusual about the massive beast lying twisted and broken in front of him was that it had a collar around its tree-trunk neck.

"You shot my dog." The abduction target fell to his knees in dismay, crushing a desiccated pigeon-corpse. He plucked at the terror-jaw's gnarled, leathery forefoot as though it were a puppy's paw. "Why'd you shoot my dog?"

"Stay there," Miller snapped, lifting the Gallican. "Just stay right there, and put your hands on your head." He forced himself to relax his grip, stop trembling.

The man slowly raised his arms. "What are you? Some kind of cop?"

Miller didn't answer, stepping around the cooling body to get behind the guy. The abduction target stank, and the longer he looked at Miller, the more disgust crawled into his eyes.

Oh, it was obvious the guy was a commune-member. Infected with the parasite. It wasn't the orange rash infesting his skin—though that kind of thing was common in Infected communes—it was the smell, the terror-jaw, the look in his eye.

"How'd you do it?" Miller asked, bundling up the guy's wrists in a set of zip-tie cuffs.

"Do what?" He watched Miller from the corner of his eye, part afraid, part angry.

"The terror-jaw. How'd you get a collar on it?" Had the terror-jaw been infected too? Could the Archaean Parasite jump species?

"Dunno. It was eating our trash." The guy shrugged.