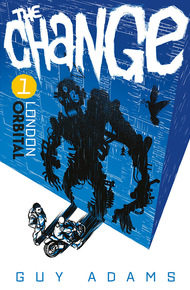 Guy Adams lives in Kent with, writer,genius and marvel AK Benedict. He spent over ten years working as a professional actor and comedian.While he still occasionally pretends to be other people for money, he now predominantly works as a writer.

He is the author of THE WORLD HOUSE novels, the DEADBEAT series, the weird western HEAVEN'S GATE trilogy, the CLOWN SERVICE series and YA extinction-event lunacy THE CHANGE. He also writes comics, including THE ENGINE from Madefire, the creator-owned GOLDTIGER and ULYSSES SWEET: MANIAC FOR HIRE, ROGUE TROOPER and horror noir HOPE for 2000AD. He is a regular writer for Big Finish, writing countless Doctor Who audiodramas as well as Torchwood, Blake's 7, adapting HG Wells' THE SHAPE OF THINGS TO COME, and original horror series BLIND TERROR.

WHERE WERE YOU WHEN THE WORLD CHANGED?

One minute everything was fine and the next… they arrived. Those that saw them died instantly. The unlucky ones survived. Now unimaginable things straight out of nightmares roam the streets of our towns and cities. Nothing is impossible. Nowhere is safe. And no one can escape The Change…

Howard doesn't know where he is or how he got there. He's not even sure his name is Howard. But he knows he is in trouble. Alone on a stretch of motorway jammed with broken down cars full of corpses and strange creatures, Howard falls in with a motorbike gang living in a nearby service station. But even The Kingdom of the Welcome Break can't keep him safe. Something is moving between the rows of cars, something that used to be human but now clanks with metal, hisses with hydraulics, and is always on the lookout for new parts…

HE WOKE TO the smell of petrol and smoke. It wasn't the pleasant wood smoke of barbecues and winter fires, it was acidic; black curls of burning plastic and rubber. Chemical smoke. It burned the back of his throat, like trying to breathe static.

Sitting up, he brushed dust from the chest of his coat. His face felt wet. He touched his cheek and found blood. This didn't seem surprising, though he was in no pain and had no memory of how it had happened. Perhaps it was the idea of wounds that he was used to, like someone who has had a lot of them.

He got to his feet, his legs aching because he'd been lying on them, trapped nerves and the bristle of pins and needles.

The road was full of abandoned cars. Some were intact, others had blossomed into roadside flowers: petals of gouged metal and a dew frosting of shattered glass. They were nose-to to-bumper on all four lanes, stretching as far as he could see.

To his right there was a city. The shape of it was familiar. Even though he knew very little at that moment, he still knew London.

He bent down to look at his reflection in a wing-mirror. The blood was running from a small cut on his forehead, trickling down his face and washing the dust away en route. It gave his reflection interest, there was no other reason to look at it—it wasn't a face he knew.

He walked off the road, looking for somewhere to sit in the long grass of the embankment. Somewhere to get his head straight.

Every few seconds there was the distant roar of engines, like monsters fighting one another just over the horizon. Sometimes the breeze carried the sound of shouting and laughter. Sooner or later the people making that noise were bound to head in his direction. He wasn't sure how he felt about that.

He found water, a small amount collected in the rusty bowl of a stray hubcap. He dipped his fingers, meaning to clean his face, the water stung his skin and he was thankful he hadn't tried to drink it.

He was hot. He made to pull off the long leather coat he was wearing before deciding to check the pockets first. His fingers pulled out a small, black notebook but as he could neither eat nor drink it he dropped it to the ground and carried on searching. There was half a packet of chewing gum—the sort that came in a foil-sealed tray, like pills—nothing else. He took off the coat, sat down and popped a piece of the gum into his mouth. It was strong menthol and made the inside of his mouth cold.

He picked up the notebook. It was old, battered and creased. He held it up to his nose and sniffed: leather. It occurred to him how ridiculous it was to know the smell of leather but not be able to recall your own name. A strap of elastic was threaded through the back cover then wrapped around the front to hold its pages shut. He snapped the elastic back and opened it up.

This book belongs to: Howard Philips

announced the front page. Surrounding the text were various sketches and doodles, from vague swirls to people's faces. He turned the page.

The Change—Notes on the New World

It didn't sound very interesting. If the notebook was his—and he had no reason to doubt it—the news was not good: not only was he called "Howard", but he also wrote boring books. He read on, in the hope that things improved:

I wasn't there for The Change, if I had been I would be dead. Nobody who saw The Change survived, that's why there aren't many people left.

I met a man once who SAID he'd seen The Change, said he'd seen 'the Gods' appear and begin to change stuff. But then he also used to wear dead cats on his head. He was crazy and nobody believes crazy people, not even now when there are so many of them.

It happened on the morning of the 6th of January. People call them 'Gods', the creatures that appeared. They call them that not because anyone would pray to them or build a church for them, they call them that because it's the biggest word for a thing people know.