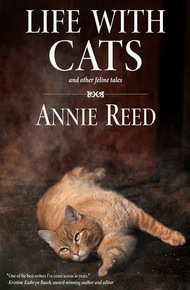 Life, With Cats by Annie Reed

Meet a companion kitty who comforts those who've experienced a loss, a fairy cat battling to save the person she's destined to be with, and an abandoned kitten brought in from the cold to warm the heart of a lonely widow. Get to know a regal feline as she battles diminutive mouse riders intent on recapturing their queen. And follow along as two private detectives search for a beloved magical pet hiding in the strangest of places.

Curl up with Life With Cats, a collection of five feline tales by award-winning writer Annie Reed.

Once upon a time, I had a very delicate and controlling cat named Galahad. I also lived on some kind of cat-hobo trail, where homeless cats arrived for food and adoption. I couldn't adopt cats with Galahad around, so Annie took two of cats from our old hilltop and gave them loving homes. She also writes some of the best cat stories ever, stories that run the gamut of emotion from sad to suspenseful to sweet. I'm so glad she's collected many of them in one place. There are more, and I'm sure there will be even more down the road, so keep an eye out (or pick up her other collections). – Kristine Kathryn Rusch

Gurgling yowls echoed off the tiled floor in Sarah's bathroom. Bounced off the ceiling, gaining strength, and intruded on what was turning out to be a very, very nice dream featuring the star of a movie she'd watched just before bed.

In the dream, the star turned his incredibly expressive eyes in Sarah's direction, smiled his best enigmatic smile, and said, "Pardon me, darling, but is that your cat?"

(In the dream he'd turned British. She happened to know he'd been born and raised in the Bronx. Dreams were just plain weird sometimes.)

Starlight the Cat had a battle cry like a two-note yodeler gargling mouthwash. She reserved that particular cry for whenever she caught a mouse. Or something that looked like a mouse. Or a mouse-shaped stuffed toy.

Most of the time she'd only caught one of her toys. Thank goodness. But on at least one memorable occasion she'd interrupted a visit from Sarah's mother by presenting a live mouse as the third course for their lunch date.

So where did Starlight drop the mouse? Right at her mother's feet, of course.

Sarah's mother had screamed. Starlight had looked suitably insulted at having her contribution to the meal rejected. And the mouse? It had attempted a quick getaway, but Sarah had thrown a kitchen towel over the poor thing, taken it for an elevator ride—where she'd gotten a few odd looks from her neighbors—and released it into the wild in the bushes outside her apartment building.

She'd laid out traps after that, but no more mice appeared, living or dead.

The dream, complete with the suddenly British Bronx-born movie star, dissolved completely as Sarah sat up in bed. She groped for her cell, thumbed it on to read the time—two thirty-eight!—and squinted in the general direction of her bathroom.

The nightlight next to the bathroom sink threw a faint ghostly glow into Sarah's bedroom. She slid out of bed and shivered as her feet hit the cold hardwood of her bedroom floor.

She tucked her feet inside her fuzzy pink slippers and pulled on the zippered hoodie she'd left on the other side of her bed.

She really needed to buy herself a robe one of these days. For late-night mouse rescuing, if nothing else. And there hadn't been anything else in longer than she cared to remember, hence the promising dream.

Starlight did her gargle-yowl again, louder this time.

A second sound echoed off the bathroom tiles. Not a squeak—Sarah would have expected that—but an angry shout. A very high-pitched, tiny shout.

Sarah stopped short, blinked, and then pinched herself on the arm to make sure she was awake.

So what in the world was going on in her bathroom?

She crept to the bathroom door, turned the light on, and poked her head inside.

Starlight was crouched in her hunter-kitty pose. She held something in her mouth that was vaguely mouse-shaped with brownish-gray fur and a long, thin tail. Only the tail had a fuzzy puff of fur at its twitching tip.

Mice didn't have fuzzy tails, did they?

Sarah took all that in at a glance. What really caught her attention was the tiny figure standing right in front of Starlight shouting at her cat.