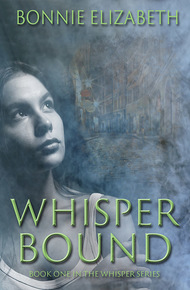 Like the protagonist in Shadows of Solstice, Bonnie Elizabeth graduated from a Lutheran University that held Lucia Bride Festival. Unlike her protagonist, Bonnie had never been kicked out of other schools, nor did a church burn down, and she was not required to save the world. This is fortunate for humanity as she's a better writer than fighter.

Bonnie writes a variety of speculative fiction, from her Afternoon Gothics series to paranormal cozies, to urban fantasy and even some secondary world fantasy and science fiction.

She is active on her Bonnie Elizabeth Facebook page and you can find her through her website BonnieElizabeth.com

Falling out of bed when the earth shakes starts private investigator Meg Barringer's day. Then an investigation into the death of a woman buried alive lands on her desk.

Meg's investigation leads her to the charismatic and mysterious Peter Eresh, a most unusual resident of the town of Whisper. As Meg's inquiries take her deeper into dangerous territory, she stumbles onto a deadly plot.

Unfortunately for her, outsiders trying to control the very land upon which Whisper is built have come to town. Their interference could cause disaster for the town and could cost Meg her life. Whisper Bound is the first book in the Whisper series.

Bonnie doesn't just write fiction about cats, she writes non-fiction about cats as well. She also blogs about them, and she is my go-to cat expert when I have a real life cat question (or problem) I can't solve. Her fiction is marvelous, and when she adds cats, her fiction has that extra zing of magic. Once you start this series, you'll want to binge on the next nine books. – Kristine Kathryn Rusch

"I am still perplexed as to how he keeps finding you." Zari A was leaning over the laptop, as if pushing her nose against the screen would somehow change the information we had. I'd finally brought it out of my room and it was set up on the coffee table in the living room.

I was still stewing several hours later, long past lunch time and moving close to dinner time. Zari and I had been on the computer to find out what we could. It was frustrating to me to consider that Tom was able to follow me so effortlessly, although this last time I seemed to have run right to his den. If only I'd had a name for the place he called home. Why hadn't he ever said anything? Then when Zari A found Whisper, we could have left before I started thinking I could set up my business here.

Sometime during the afternoon Peter joined us, sitting in a large chair towards the back of the room. His feet rested on the footstool, still barefoot from the morning, although he was no longer in sweats but in his more usual uniform of blue jeans and long sleeved button-down shirt. This one was blue denim, the most common color to find him wearing. His hands waved in the air making symbols like he was playing an invisible cat's cradle. They kept moving even when he deigned to talk to me.

"He shouldn't have been able to find you here," Peter commented. "Tom may have the blood of the Dixons, but he's never lived on the mountain. It's not like you can inherit the family bond."

"The Meiers are part of the Dixon family tree," Peter explained, only slightly impatient. Whatever he was focused on working there in his chair, it wasn't my problem, certainly. He rarely got impatient with questions, mine or Zari's, and Zari asked a lot of questions.

"Do you know which cousins he visited?" I asked.

"Alex of course. And his sisters, although they've left. I think Tom had an older brother as well. I can't say that I thought much of that branch of the family though."

Peter gave a half shrug. "Lots of stuff going on with the father and the children. He never seemed to miss an opportunity for discipline, which often appeared overly harsh. Gossip in Allison's Diner at the time was that he was abusive. His older brother was definitely a bully. I once broke up a fight between him and two of the DeCaire boys. Believe me, the DeCaires are scattered and irritating but they aren't much for fighting."

I nodded, wondering about the blood lines Peter just spouted off so quickly and easily. Fortunately Zari A seemed to be taking mental notes, which she could use to help fill me in later if I had further questions.

"I'm just pissed that Tom was able to follow me when the detective I hired wasn't. I thought I had my tracks covered."

"The detective can only work on the physical level, Rain." Peter spent a moment looking at me, daring me to contradict him.

"So you think Tom has magic? You just said he didn't live on the mountain so had no special powers."

"The mountain isn't the only thing that offers special powers. There are any number of people here who want various types of power that they think magic can give them."

I sat there looking at him for a moment. "You mean to tell me that magic is real?"

"Do you really not believe in magic after everything you have seen and heard when Peter and I talk?" Zari was looking up at me from where she had settled next to the laptop. Both of her front toes were now curled under her body, leaning against the edge of the machine. Despite her apparently relaxed position, she would be up and ready to read anything the minute I started typing.

"Not that sort of magic," I said. "Besides, wouldn't you or Peter or someone have noticed something like that?"

Peter shook his head, not bothering to answer. He was back to paying full attention to his hands.

I sighed again. I felt like I needed to eat but I wasn't hungry. In fact, the very thought of food tightened all the knots in my stomach. Why offer to buy the building?

"I suspect the building offer was a game," Zari said, looking at me.

"You run whenever he shows up. I suspect he's saying he knows that now that he's appeared, you'll run again."

I nodded. It's a power play then. Would I run or would I stay? Or did he think he had put me in a lose-lose situation? If I ran, I was playing into his hands but if I stayed he would always be there, a shadow ready to show up when I least expected it.

"You are safe at the house you know," Peter added, glancing up from his work.

I nodded. "Just the house?"

Peter smiled faintly before going back to work on whatever it was he was concentrating on.

"What are you doing?" I finally asked as the silence settled over us.

Peter looked up surprised. "I believe that someone bound an earth spirit last night. That was what was going on with the earthquake. Nature spirits have no desire to be told what to do."

Peter ignored the comment. "I'm working to set it free. There is something more there that binds it to the caller but there are many strands and I'm not yet able to see them all."

"I'm sure you'll get it. I just hope Tom doesn't show up while you're so distracted."

"I doubt that Tom is likely to show up here no matter how distracted I am. This is not a place for uninvited guests." Peter paused looking at his hands for a moment before continuing. "He was never a particularly brave boy. Like his father, he was more of a bully. Fortunately that branch was never one for exploring their talents so between leaving the mountain and lack of use, they were never very powerful."

"Good to know." I watched the hands moving quickly and proficiently. "You don't suppose Tom could have bound the earth spirit?"

Peter glanced up surprised. "No. That would take talent and as I said, he has little. Certainly not that kind."

"Of course," Zari A said, "he could be working with someone or have hired someone."

"No one could promise to bind a nature spirit," Peter growled, offended at the very thought. "So it is doubtful he's involved. Although the type of person who would want power might attract a man like Tom. He too wants power that is not his to wield."

"He's probably working with someone who can find Rain." Zari stretched as she said that.

"You don't think Tom has the power?" I asked.

"If he himself had the power, there wouldn't be delays of months before he found you," Peter said, obviously distracted again. A frown line appeared between his eyebrows. I swear I saw the tiniest bit of tongue as he worked a particularly intricate pattern with his fingers.

"Who would he know?" Zari mused. "Will you boot up the computer again? I want to look at his phone records for anyone he is friends with and check on them."

"You could hire Meg to do that, you know," Peter said.

"It's not something I want to advertise. Besides, I'd rather come to her as an equal, not a supplicant." I'm quite proud, which I'm not afraid to admit to myself.

Peter didn't quite shrug but that very faint smile crossed his face and he wouldn't meet my eyes. No doubt I'd look the supplicant to Meg no matter what. At any rate, Meg would need to go through legal channels. Zari A had no such compunctions and her computer skill was easily able to hack into almost any database. I just needed to do the typing.