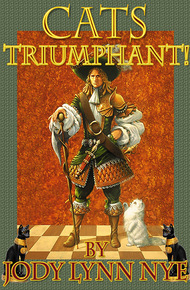 Jody Lynn Nye, a fantasy and science fiction author noted for her love of cats and humor, has collected a number of her favorite stories about cats, felix domesticus as well as cat people and alien felines. From a heroic cat saving the crew of a spaceship to a pair of house cats saving their home from invaders, you'll find a range of tales here to enjoy.

Like me, Jodi lives with cats. Like me, Jodi writes a lot about cats. Cats Triumphant! isn't the only cat collection Jodi has. When you finish this one, look for her other cat story collections. – Kristine Kathryn Rusch

The long, black cat with the green eyes watched carefully as the middle-aged woman in the green suit strolled purposefully toward the footbridge. Three, two, one… now! Stish dashed out of his hiding place and rushed across the woman's path. She recoiled.

"Eee! A black cat!" She stopped walking, and looked around to see if anyone had observed her. Stish sat down on the end of the footbridge and looked at her. Nervously, she backed away, and went looking for another way across the canal. Stish waited for a while, then went back to his comfortable burrow. He glanced up at the clock tower sticking up above the low buildings on the water's edge. Almost eight o'clock. Where was Murphy?

"Heya, kitty-cat," the burly dark-skinned man said, driving up in the pickup. "Gonna finish that bridge today. You gonna come and watch me some more?" He gawked. "Hey, what happened to the warning sign? Got to be those damned kids. Good thing no one's walked on it. They'd have fallen right into the canal."

Stish squeezed his eyes as Murphy got out of the truck and fondled his ears. "C'mon and talk to me while I work. I got tuna for lunch."

Murphy did a good job on the bridge. Stish stuck around to make sure he remembered about the cleats holding up the bracers at the far end, too, then sauntered away. The tuna was good, too.

Rossburgh was a great place to live, in Stish's opinion. The town was growing, but not too fast. The mayor was one of those 'intelligent progress' guys, or so he claimed, according to the accounts in the newspapers Stish used for padding in one of his many outdoor accommodations. Prosperity for all, was one of his mottoes. He had lots of social programs in place to make sure that it was decent for everyone. Make everyone happy, get everyone involved in helping to make their lives better, respond to problems before they became problems, and no one would feel the need to commit antisocial behavior. At least that was the theory. So far Rossburgh didn't have the gang problem that a lot of neighboring cities did, but it was coming. Stish could feel it. Still, the mayor's plan was working. He had a lot of community grassroots support, and Stish was doing his part. A rising tide lifted all boats, and where people didn't feel like trapped rats, there was a lot less animal cruelty going around. To do his share, he had to use the tools available to him, as a civic-minded feline-American citizen.

When he got to the assisted living center, a heavyset woman, the manager of the group home, was looking out the door. "There you are, baby. I was wondering when you'd get here. Mrs. Latrobe's been waiting for you. You are just the best therapy animal we ever had, and I don't know who trained you!" She picked him up and slung him over her shoulder. Stish burbled a little and worked his paws as she carried him down the hallway. Her soft flesh was nice to snuggle up with. If he had ever decided to go tame and pick a home, Mrs. Jones was first on his list of potential roommates.

"Mrs. Latrobe, honey, here's Puffkin!" she announced, as she plopped Stish into the narrow lap of a nearly blind old woman wearing a pink bathrobe in a wheelchair. The clawed hands felt their way to his sides. Stish tucked up his paws and let out the loudest purr he could. The toothless mouth grinned widely.

An hour later he was on his way to the Salvation Army soup kitchen in the middle of the old section of town. He liked to patrol the long, narrow building for rats before they opened the glass doors for dinner in the evening. Colonel Stan Kozlowski welcomed him with a sharp salute.

"Scout, good to see you!" the tall, thin man exclaimed. "Patrol the premises, then report for prayer services promptly at 1730 hours. Rations will follow."

"Meow!" Stish replied, sitting down and wrapping his long, thin tail smartly around his legs. It was as close to 'yes, sir!' and a salute as he could muster, and it pleased Colonel Kozlowski. Stish could have done without the prayer session, though. He respected the Army, but he didn't appreciate any belief system that placed him among the lower animals ruled by Man. That wasn't the way things really were.