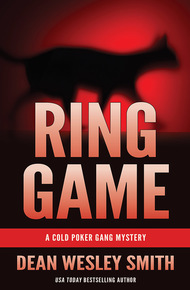 Turns out retired Las Vegas Detectives Benson Cavanaugh and Bonnie State enjoy working together, even after years of working alone. And on their second time to a Cold Poker Gang Task Force meeting, they take home not only an impossible forty-year-old cold case murder to solve, but a family of cats.

Slowly, detail by detail, Bonnie and Cavanaugh piece together what happened to not only their original murder victim, but to other victims over the years.

A twisted mystery of the good in the world colliding with the bad. And, of course, cats. Lots of cats.

I had no idea how Dean was going to write a Cold Poker Gang mystery with cats, because his Cold Poker Gang series usually has detectives doing detectivey things away from their homes. Leave it to Dean to find a way to make the cats important and the center of the mystery…and keep the heart of the series alone. If you've never read the Cold Poker Gang, this is a great place to start. – Kristine Kathryn Rusch

Las Vegas Metro Patrol Officer Matthew Young stared at the dead body of the young woman sitting behind the wheel of a new, blue-tinted Chevy. He just flat wanted to be sick. In his first year on the force he had seen some ugly stuff, but this was one of the worst, without a doubt.

The Chevy had been pulled off the two-lane Highway 95 about two miles outside of the city limits of Las Vegas sometime during the night. This road headed northwest toward Reno and didn't see much traffic at all at night.

The body had been posed behind the steering wheel as if she had been driving. Not much chance of that.

Young looked away and out over the desert around him, forcing himself to take deep, long breaths of the crystal-fresh air. Right now the sun was just barely cresting the mountains to the east of Vegas and the air had a sharp bite to it, so he could see his own breath.

There was nothing but open desert and scrub brush around where the car had been parked. Closest building was back a good half mile toward Vegas. Nothing at all in the other direction for miles and miles.

The only reason he had stopped to check on this Chevy was because the lights of the car had been left on and he could tell from the looks of them that the battery was almost dead. He figured the driver was asleep or might need some help.

But the woman behind the wheel hadn't been the driver and was far, far from needing help.

Young turned back to study the scene while he waited for his back-up and the coroner's office to arrive. He didn't dare touch anything, but he might see something that would help.

The woman now sitting peacefully had clearly been dead long before she reached this spot. From the looks of her hair and shape, she was young and had a trim figure. She had on a blue thin sweater over a white blouse and a light-blue matching skirt. Being single and only a year out of the academy, he didn't know enough about clothes to know if they were expensive or not.

There was no purse or identification in the car that he could see, but he knew enough to not do more than look from the outside at the interior of the car.

And without something like that kind of identification, Young doubted this woman would ever be identified. All ten of her fingers had been cut off, the stubs of her hands resting peacefully in her lap. Her mouth and most of her face had been destroyed by a blast from some gun, more than likely a shotgun.

What was strange was that there was almost no blood on her clothes and none that he could see in the car at all.

This was the second body exactly like this he had seen in his first year on the job. The first time he had been called to the scene later to work traffic as they took the woman's body out of the car. He had been sick on that one in the ditch beside the road when he made the mistake of watching them take the poor woman from the car. And the body had been found, also in a Chevy, and also on this same road.

In fact, he wouldn't doubt if it was pretty much in this exact same spot.

The first young woman also had all her fingers gone and her mouth and face totally destroyed. Clearly both had been killed by the same sicko and for some reason the killer did not want his victims to be identified.

So the sicko had killed them somewhere else, destroyed their teeth and mouth and face and then cut off their fingers. No prints, no dental, nothing.

Young had heard of no leads on the first case and unless they got real lucky, this poor girl would end up with no family or friends knowing she was dead.

He turned and walked through the cold morning back to his patrol car to wait for the help that was coming. Somehow, even though he was new on the job, he would work to find out who did this, move this case forward as much as he could. Find the animal who did this.

Or go to his grave trying.