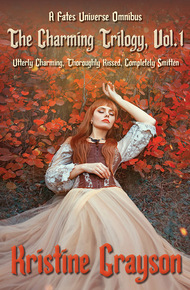 In this romantic trilogy, fairy tales and myths inhabit a slightly askew world of charming princes, sleeping beauties, and happily-ever-after endings. Filled with lively extras, including "The Strangeness of the Day," the story that launched the whole universe of the Fates.

Welcome to the fractious fairy tale world of Kristine Grayson, where the bumpy road to happily ever after surprises and delights.

Confessions of a Genre Hopper

Kristine Grayson was born out of desperation, in a world that no longer exists, for a reason that's no longer relevant.

Before then, traditional publishers had no idea what their book sales were until months (sometimes years) after the book was published. I used to type (yes, on a typewriter) the profit and loss statements for William C. Brown Textbook Publishers, in Madison, Wisconsin, back when I was a lowly editorial assistant.

I'd get the hand-scrawled P&L from the editor. It would all start with a projected sales figure for the book, usually in the tens of thousands. One day, I asked the editor how she came up with that number. She eyed me suspiciously, as if wondering why I had such a question (after all, I was just a lowly editorial assistant), and said, "Experience."

I kept asking that question to a bunch of different editors until the 20-something senior editor who never opened a book, but who had been promoted from sales, answered it for me.

"We guess," he said, "based on past experience with the author or with that type of book."

Seems that senior editor was promoted not because he knew quality when he saw it, but because his guesses were the best possible guesses in a world where guesses ruled.

That was the world my writing career started in. I write every genre. Every single one because I read every genre.

And back in the world where guesses ruled, my genre hopping wasn't a problem.

Cue the rise of computers.

Computer sales added accuracy into the mix. They also leveled the playing field for romance novels.

Computers proved that with hard numbers.

But those hard numbers came at a potential cost to my genre hopping. You see, another feature of the 1990s was something called "buying to net." Bookstores also started using computers, and rather than buying based on the owner's gut, the buying was based on previous sales figures.

So if the writer's previous novel sold 100 in Bookstore A, then Bookstore A would order 100 copies of the next novel. Not 101, not 200, just 100. (And if you own a business, you see where this is going: how does a writer grow sales when the system is designed to order the fewest copies? Reorders were slow, and often didn't get counted into the "net" total.)

There are many problems with buying to net that I'm not going to go into. But here's the one that hurt the genre hopping—and I'll use made-up numbers here:

The average book sale at a large bookstore for a new release romance novel was 100 copies.

The average book sale at a large bookstore for a new release mystery novel was 60 copies.

The average book sale at a large bookstore for a new release science fiction novel was 20 copies.

If I wrote all my genre-hopping books under the same name, my sales figures would confuse the heck out of book buyers. They wouldn't look at the genre, just the name.

Cue the pen names. Kris Nelscott for my dark noir historical mystery novels and Kristine Grayson for the off-beat fantasy romances that I wrote as a palate cleanser (and mood stabilizer). Kristine Kathryn Rusch would continue to chart her genre-hopping course, mostly through fantasy and science fiction, which had similar sales numbers (back then: not now), and the other names would have to fend for themselves.

This book is part of maintaining Kristine Grayson's career.

Yeah, the book is a lot of fun. I get to compile most everything I can find that relates to the novels herein. But there's another—business—reason for putting the books together.

Utterly Charming and Thoroughly Kissed are still available as standalone novels through Sourcebooks, who bought the books along with some originals in 2009—right at the same time that Kindle was changing the publishing world.

Those novels were originally published through Kensington, and eventually went out of print. The editor at Sourcebooks didn't want the third book in the series, Completely Smitten, because it doesn't have a certified Prince Charming (although I find Sancho much more interesting than the average prince), and that was just the beginning of the nightmarish things that editor did to my various books.

You've all read litanies from writers about the nasty things editors have done over the years, and I have a ton of stories, which I will mostly spare you. (I'm sure some writers have stories about evil me back when I was editing; we all make mistakes as editors, and unfortunately, the writers are usually the ones who suffer.)

Suffice to say that changes got into Utterly Charming and Thoroughly Kissed, in the Sourcebook editions, that I did not approve. So those standalone books are substantially different from the books you'll find in this omnibus.

I have restored the proper order of the novels as well. Utterly Charming comes first, followed by Thoroughly Kissed. Completely Smitten is next. The other omnibuses (omnibi?) that will follow these will be in the proper order, so you can see what happens to the Fates before they get fired or how the Interim Fates develop or how Sancho relates to Blackstone and Emma, and why Sancho is important.

I've also enclosed the short story that started it all. I love to write for other people's anthologies. They teach me to stretch or to come up with ideas that I wouldn't normally have.

Utterly Charming came from a short story called "The Strangeness of the Day." I initially wrote that story in 1998 for an anthology called Battle Magic edited by the late Martin H. Greenberg and Larry Segriff for Daw Books. I have no idea why the story took a wacky turn. It just did. The characters appeared—Blackstone and Sancho side by side from the start, along with Nora—and I realized I had an intriguing world on my hands.

I immediately wrote the novel that the short story wanted to be, and as I wrote that novel, I realized I had two more novels to write. One of the axioms of writing is write about the person who hurts the most, and I didn't do that in the short story or in Utterly Charming. Because the person who hurts the most is Sleeping Beauty. So she had to get her own book. And as that book started, I realized that Sancho is so much more than he seems to be. So I had to write his book.

That's why all three work together, and why they're all in this omnibus.

The short story, which I wrote under Rusch, also had a life of its own. It got reprinted in French and went on to win France's fantasy award, Le Prix Imaginales, in 2003. The short story will be very familiar to those of you who read the novel, but the short story is a different form of the tale—the tale in miniature, with so much missing.

The other two novels came from the same short story, so there's no related short story for them.

I've included other extras for Utterly Charming and Thoroughly Kissed. Both books were reissued in the heyday of the blog tour. In 2011 and 2012, the thought from big publishing was that guest blogs would help book sales. Turns out that blog tours make very little difference for the books themselves, although the guest blogs do raise the profile of the blog itself.

I found the blog tour posts as I was searching for other material for you all to read. Rather than let those short articles vanish into the past, I figured I'd share them here. Yes, there's some repeated information, but you might find something fun in them. I did.

The birth of Kristine Grayson saved my career. Her existence allowed me to write books I really wanted to write, books other romance writers call "Books of the Heart."

I love writing these books, and I'm happy to share them, and all the ephemera related to them.

I hope you enjoy it all.