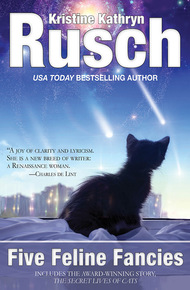 Five of Kristine Kathryn Rusch's most popular cat stories. They run the gamut from the award-winning "The Secret Lives of Cats" to the whimsical "The Poop Thief." Other stories in the collection include reader favorite "What Fluffy Knew," the short mystery "Scrawny Pete," and the Fey prequel "Destiny."

Maybe I write about cats because I live with them. I have had as many as 12 and as few as one. Much as I love them, I do feel as if I'm living with alien creatures. I understand what they do, but the understanding is shallow. I can predict their behavior, but never truly know why they do what they do.

The only cats in this collection who are pure cats are the cats in "The Secret Lives of Cats." Inspired by a German photographer who really did rig up cameras on his outdoor cats, I thought as I read about him what if his cats brought home pictures of an unexpected subject?

Sometimes I think Solanda, the Fey Shapeshifter whose chosen form is feline, is also a true cat. She's loyal, but surprised by it. Her story spreads through the first few novels of the Fey. "Destiny" happens before those dark days.

I wrote "What Fluffy Knew" and "The Poop Thief" for invitation anthologies on particular subjects. I wrote "Fluffy" for Alien Pets. Since I already thought cats were alien, I decided to explore something else. That thought, along with the recent death of my very pampered cat Ashley, inspired "Fluffy."

I wrote "The Poop Thief" for an anthology called Enchantment Place, a loosely collected group of magic-shop stories. I had no idea at all for the anthology until I heard an ad for a local clean-up company that promised to "steal the poop from your backyard." Suddenly, in the rather magical ways that stories come about, I had "The Poop Thief."

As for "Scrawny Pete," I have no idea where that story came from. It just happened one day. Rather like Scrawny Pete himself, I think.

Anyway, I hope you enjoy this small group of stories. I will publish other five story collections. They'll unify around genre or topic. So enjoy this first offering. I had fun putting it together.