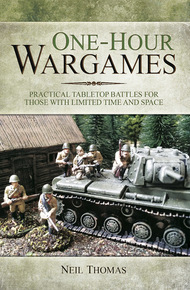 Dr Neil Thomas is Reader in German in the School of Modern European Languages in the University of Durham.

One of the biggest problems facing wargamers is finding the time to actually play. Most commercially available sets of rules require several hours to set up and play to a conclusion; some can easily swallow up a whole day or weekend. For many gamers this means that their lavishly prepared miniature armies rarely get used at all. Apart from time, the other consideration is space, which further constrains the opportunities for a game. In One-hour Wargames, veteran gamer and rule-writer Neil Thomas has addressed both these problems. Now it is practical to play a game in around an hour on a normal dining table or living room floor. The book contains 8 (all-new) sets of very simple rules for various periods, from Ancient to WW2 and 30 scenarios which can be played using any of them, so you don't even have to take too much time thinking up a stimulating tactical situation and objectives. All the rules and scenarios are intended to be played on a 3ft x 3ft battlefield. The rules only require a small number of miniatures, so this really is an ideal way for new gamers, or veterans trying a new period, to get started with minimal investment of time and money. Also ideal for a quick game in the evening when a friend pops round. There are also sections on campaigns and solo games.

A practical wargame is one that everyone can play. One would have thought that this was true of all games by definition: for if somebody can play a particular wargame, it is necessarily practicable. Feasibility is not however synonymous with accessibility, for many wargames invariably fail to account for constraints of time or space. This can be seen with reference to the wargaming ideal: a table measuring 8' x 5', and featuring hundreds of beautifully painted 28mm metal wargames figures. Such games look magnificent, and are a tribute to what can be achieved after years of effort spent amassing and painting a huge collection of wargaming material. They cannot however be described as practical for everybody: massive financial expense is required (at the time of writing, a single 28mm unpainted metal infantry figurine costs just over £1); painting hundreds of figures takes a vast amount of time; and logistics can make such games impossible. For an 8' x 5' table needs a huge amount of space – this is not a problem if the gamer has a dedicated wargames room at his or her disposal, but most players who live in average sized houses would be forced to have temporary recourse to the living room floor. This can create a whole myriad of difficulties: the game cannot be left set up overnight, for it would get in everybody else's way; other family members may well be watching television, a serious barrier to concentration; and pets can wreak havoc as they either walk over the battlefield, or play with the figures in their own somewhat idiosyncratic way!

It should be apparent that although large wargames represent the ideal to which all hobbyists should aspire, many lack the time, space or budget to make such enticing projects realizable. Yet many articles in wargames magazines assume that such enterprises are not only achievable, but commonplace – some recent pieces have for instance provided for what their writers maintain are small wargames, involving about 200 figures per side fighting over a 6' x 4' table. These do not strike me as being especially diminutive. A practical wargame on the contrary requires a genuinely small tabletop (3' x 3'); appropriately sized armies (no more than 100 figures per side); and games that can be completed in about an hour, allowing for contests in the evening after school or work.

This book is devoted to practical wargaming. It offers appropriate sets of rules, and thirty different types of battle scenarios for small tables and small armies. The rules are simple, thereby encouraging ease of understanding and rapid play. I have included nine sets covering all the major periods. Readers should always bear in mind that simple rules are not necessarily unrealistic, which all too common misconception has resulted in some monstrously turgid and hideously complex rulebooks being produced in the name of realism. Simplicity is at least guaranteed to produce enjoyment; and I have provided introductory chapters to each of my rulesets, explaining my design parameters. This allows readers to appreciate why the rules were designed as they were, and more importantly form a critique of their efficacy. The latter activity will hopefully lead to all readers deciding to write their own rules: for designing your own wargame is a more rewarding activity than any other; you instantly become a true military historian, having researched particular conflicts and simulated them through the medium of a wargame – playing your very own military simulation will always be much more enjoyable than using someone else's rules, no matter how eminent their author may be.

The battle scenarios included after the rulesets allow for a variety of encounters, all of which can be fought using any of the rules included. They are intended to show that there are many more types of wargame than the basic competitive encounter, when two armies face each other over an essentially open battlefield, with no context provided and with the sole aim of eliminating as many enemy units as possible. Such battles can be most enjoyable, but are rather basic; more variety eventually becomes essential, and certainly provides for a more challenging (and hence rewarding) wargame.

Having a book which includes advice on producing a practical wargame is only the first step, however. The next problem lies in gathering armies and constructing a wargames battlefield. Experienced wargamers will already have both these things, and are probably advised to skip the rest of this chapter and proceed to the next. Beginners will however by definition lack both figures and a battlefield: the rest of this chapter suggests ways of acquiring both.

The first thing to do is choose a period from the nine I have provided rules for. All nine are fascinating; the reader should start collecting armies from the epoch which fires his or her imagination the most. Having done so, the next step is to acquire wargames armies. This step is greatly facilitated by visiting any large newsagent and buying copies of the latest wargaming magazines. These are always good sources of postal or website addresses of figure manufacturers, quite apart from the insights provided in the range of articles published. There is however a problem in the sheer variety of model soldiers available. The most common sizes are 28mm and 15mm, but you can also find manufacturers of 54mm, 42mm, 20mm, 10mm, 6mm and even 2mm miniatures. All these figures have their merits and their advocates; but it is fair to say that an opponent is most likely to be found if sticking to 28mm or 15mm miniatures. If further advice is required, it can always be found at a wargames show or a local club (details of both can often be found in the wargame magazines), where experienced wargamers are always ready, willing and able to help beginners into the hobby.