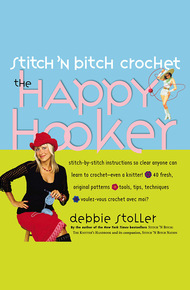 Debbie Stoller and Laurie Henzel are the founders and publishers of BUST magazine—Stoller is the editor in chief and Henzel is the creative director. Stoller is also the co-author of the BUST Guide to the New Girl Order and the Stitch 'n Bitch knitting book series. Stoller and Henzel both live in New York City.

Stitch 'n Bitch Crochet is chock-full of instruction, inspiration, and to-die-for designs, from lacy, sexy summer tops to chic, cozy sweaters, chunky, funky hats, and colorfully crafty afghans. And, as Debbie Stoller demonstrates with her easy-to-follow instructions, it all starts with the simple act of wrapping a hook around a strand of yarn.

Full of color photographs and instructional illustrations, Stitch 'n Bitch Crochet is the perfect primer on knitting's sister craft—from tools and uses for the different gauges to all the cool yarns available. She also takes you through basic techniques and stitch patterns including the chain stitch, picot, flowers, filet crochet, changing yarns, and finishing. Then come forty fabulous projects for everyone from beginners to experienced crocheters: A pom-pom capelet, a retro clutch purse, an "Anarchy Irony Hat," an "Orange You Glad Bag," a "Doris Daymat," a beach-ready bikini, animal iPod cozies, a kid's sock monkey afghan, and so much more!

These are definitely not your grandma's doilies.

When folks who were familiar with my previous Stitch 'n Bitch books, which are both about knitting, first heard that I was planning to write a book about crocheting, some of them were a little shocked. "Do you even crochet?" they'd ask, rather accusingly. How could it be that I, a knitter, was qualified to write a book about crocheting? How was it possible that any knitter could have anything of value to say to crocheters? Didn't I know that knitters and crocheters are like Sharks and Jets—they don't get along, they keep off each other's turf, they break into fights on the playground?

Yes, I know, I know. But have Tony and Maria taught us nothing? Can't we see that we're all sisters (and brothers) under the stitch? Sure, I'm a knitter. But I also crochet. In fact, I learned to crochet—and enjoyed it—long before knitting ever felt good in my hands. In the tradition I come from, if you enjoy doing needlework, you enjoy doing needlework in whatever form it takes. My Dutch mother and all the women on her side of the family were needle wielders of wide and varied skills: sewing, embroidering, knitting, and crocheting—they did it all. I grew up enjoying each of these crafts as well, and I've always wanted to learn more. After watching my Great Aunt Jo diligently tatting elaborate thread edgings onto her handkerchiefs year after year, I finally borrowed a book from the library and tried to learn it, too.

I particularly revel in the way that doing needlework inextricably binds me to my female relatives. With each stitch, I follow in the footsteps (handsteps?) of my ancestors, carrying on centuries-old traditions and paying respect to their wide and varied crafting skills. My connection is more than theoretical. Some of my fondest memories are of summer vacations visiting my mother's relatives in Holland, where, in the evenings, we'd sit together and work on our various needlework projects—my mother perhaps crocheting a lacy curtain, my Aunt Hetty stitching one of her gorgeous appliqué wall hangings, my grandmother most likely knitting socks, while I might be working away on a small counted cross-stitch project. Looking back on it, I suppose these idyllic get-togethers were, in a way, my first Stitch 'n Bitch sessions.

I don't remember exactly when I learned how to crochet. All I know is that my very first crochet project was a panda bear that I had found a pattern for in one of my mother's magazines. I must have been about eleven years old. I worked on that thing day after day, but unfortunately, my stitches were way too loose, and the panda turned out almost as big as I was, with a giant encephalitic head that flopped over and rested on his distended belly. Still, for years he sat, pathetically floppy, on top of my bed. To me he was beautiful; after all, I had created him. I was his mother.

While I was growing up in Brooklyn, New York, I enjoyed doing needlework the way some kids liked playing stickball. I never wanted to go out and play; I preferred staying in and making clothes for my Barbie dolls on my miniature sewing machine. I savored the wonderful feeling that came over me whenever I was engaged in a needlework project. And even today, it is the sense of calm satisfaction I get from needlework that has kept me drawn to it. Blissfully immersed in stitching, I feel peaceful and centered, my mind both fully relaxed and entirely focused, as I make satisfying progress stitch by stitch, row by row. The feeling is, in a word, delicious.

Yet, for many years, I forsook the ways of the stitch. Throughout the eighties and most of the nineties, while I was in college, then in grad school, and then starting my own business, I didn't make much time for needlework. That all changed when we decided a number of years ago to begin running craft projects in BUST, the women's magazine that I cofounded and still edit. We introduced the idea with a simple pattern for a crocheted kerchief. I hadn't crocheted in years, but, to test out the directions for that pattern, I bought myself some pretty cotton yarn and a nice crochet hook. I then needed to reteach myself how to crochet, and stat. So I dragged one of my favorite needlework encyclopedias to the beach one weekend, along with the yarn and hook, and set to work. The first few stitches went smoothly—I made a chain of loops, following the book's directions, wrapping the yarn around my hook and pulling loops through loops as if I was born to do it. Even the next row came quite naturally, as I followed the illustrations to reinsert my hook into each of those initial loops and pull up yet more loops of yarn, building a row of what's known as single crochet stitches into the original base chain of loops.

Then, on the next row, my book abandoned me. Now that I needed to make single crochet stitches into other single crochet stitches, instead of chain loops, I was on my own. Where was the hook supposed to be inserted into those stitches? I wasn't sure, so I just shoved my hook under a strand of yarn that looked to be about right and carried on my merry way—all the way until that kerchief was done. It looked okay, it fit my head, and we sent the article off to print. And I was excited about having become reacquainted with this simple, pleasurable craft. All the joys I had known as a child—the serenity, the satisfaction, and the centeredness—had come flooding back to me as I held the yarn and hook in my hands, and I vowed to keep at it.

It wasn't until a few months later that I realized that although the pattern was correct, I had made the entire kerchief incorrectly. While leafing through a tiny crochet pamphlet in a thrift store, I came across an illustration that clearly showed that I was supposed to insert my hook under two strands of yarn on every row after the first one. I had created a variation of the single crochet stitch known as single crochet ribbing, which was fine, but it's not how the thing was supposed to be made. Why didn't the book I was using bother to tell me something so important? Were beginners expected to learn this craft using such incomplete directions, or were these books merely intended as a refresher course for folks who already knew how to crochet? As I continued to relearn the craft of crochet, I felt, at times, like some sort of Sherlock Holmes, sniffing through book after book until I found the clue I needed to really understand how to make certain stitches or execute particular techniques. And time after time I'd run into conflicting information or outright misinformation. There was no single source that really showed me, clearly and unambiguously, everything I needed to know.