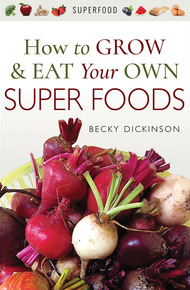 Becky Dickinson is a freelance journalist who writes for national newspapers and magazines and runs the website allotmentmum.co.uk. She has also written a number of children's books for schools.

She is passionate about the benefits of gardening, both for physical health and mental wellbeing, and is dedicated to encouraging people of all ages to grow some of their own food.

She lives in Devon with her partner and three children, and an army of slugs she's determined to defeat.

How to Grow and Eat Your Own Superfoods by Becky Dickinson

A step-by-step guide to planting your own fruit and vegetable garden—and growing your own healthy and nutritious superfoods.

Gardening is where science meets art, where nature meets nurture and where food and health unite.

In an age of clean eating and fad diets, the term superfood has become synonymous with inflated prices and overstated claims about the disease-fighting, anti-aging, life-enhancing powers these foods possess. Sales of fruits and vegetables like kale, beetroot, and blueberries have skyrocketed, encouraging us to spend money on products that have traveled miles around the country or even the globe only to sit in a supermarket wrapped in plastic for days.

Becky Dickinson's How to Grow & Eat Your Own Superfoods weeds out the hype and unearths the secrets of what makes a food super. Discover a wide array of fruits and vegetables all with their own super qualities, and learn how to sow and plant them yourself, free from chemicals and full of goodness.

In the comprehensive A to Z directory of crops, you'll find nutritional information for all kinds of fruits and vegetables, followed by practical advice for planting and growing, plus mouthwatering recipes for making the most of your harvest.

Experience the delight of following your food's journey from seed to plate, and the gratification of picking and eating your own produce. Indulge your taste buds with tasty, nutritious meals by taking control of what you eat and growing your way to better health.

FEW THINGS IN LIFE are quite as satisfying as growing your own food. There is something almost miraculous about scattering a few dry looking seeds over soil, then waking up a couple of weeks later, to a row of tiny green shoots.

As leaves unfurl and flowers give way to fruit, there is a simple yet profound pleasure in witnessing a seed's journey from plot to plate. Gardening is where science meets art, where nature meets nurture and where food and health unite.

Not only are home-grown fruits and vegetables infinitely sweeter, crunchier and more flavoursome than their shop-bought counterparts, they are also richer in vitamins, minerals and antioxidants, which are all at their peak when first picked. Yet we live in an age where 'superfoods' are marketed alongside convenience. We are urged to buy produce that will optimise our health without compromising our busy lifestyles; pre-packaged, ready prepared and unceasingly, unseasonably available.

Social media, magazines and the internet are awash with miracle diets, celebrity eating regimes and an ever-growing list of socalled superfoods that will help us live longer, healthier, happier lives. Yet often these foods have travelled miles across the globe and are tainted with chemicals that have been linked to the very diseases we hope to prevent. That bag of wilting kale has been sitting in a supermarket since Wednesday, that expensive punnet of blueberries was flown thousands of miles across the sea, those non-organic beetroot sweating beneath a layer of cling film may contain pesticide residues or heavy metals.

Growing your own produce is better for your health, better for the environment, and surprisingly easy to accomplish ...

Fruits and vegetables, whether or not they fall into the superfood subset, are a vital part of our diet and an essential source of vitamins, minerals, antioxidants, fibre and other nutrients. But the best way to ensure you are getting the maximum benefit, and no nasty extras, from your greens (and reds and oranges and purples) is to sow and pick your own. The real super foods are the ones you have grown yourself and picked in season.

Growing your own produce is better for your health, better for the environment, and surprisingly easy to accomplish. You may not be able to grow strawberries in January, or watermelons in Scotland, but you can almost certainly grow at least some of what you eat. Few people have the time or space to become completely self-sufficient but it's amazing how much can be grown with minimal expertise and resources.

Whether you have an allotment the size of a leisure centre, a garden the size of a paddling pool, or just a medley of pots, growing even a little of the food you consume will enrich your health and life in myriad ways. It doesn't matter if you have never grown so much as a handful of cress seeds before, it's never too late, or too difficult, to pick up a trowel and learn on the job.

This book is not about eliminating every non-organic molecule from your daily existence, or obsessing about every grain of sugar. It's about the realistic, enjoyable and life-enhancing possibilities that can arise from a patch of soil – while still leaving room for cake and wine.

It's about taking control of some of what you eat and growing your way to better health through the fruits and vegetables of your own labour. Because gardening, especially edible gardening, is addictive for all the right reasons.

Super reasons to grow your own

People are gardeners for all sorts of reasons; pleasure, pride, necessity, food, financial reasons, environmental reasons, physical exercise, fresh air and escapism – nothing helps assuage the stresses and anxieties of everyday life quite like a couple of hours digging and weeding. For most people, it becomes a mixture of all of these things.

Not only are conventionally-grown, mass-produced fruit and vegetables lacking in taste, they are also lacking in nutritional quality ...

The more you get into gardening, the more you discover you can't live without it. There is an intense satisfaction in witnessing all that sweat, mud and backache blossom into a magnificent abundance of flowers, fruits and vegetables. And there is overwhelming evidence that being immersed in nature is hugely beneficial for our physical and mental wellbeing.

I started growing things when I was around eight years old, when I stuck a lemon pip into a yoghurt pot filled with earth and hid it in the airing cupboard to see what would happen. It grew! And the seeds of addiction were sown.

I grew stuff anywhere and everywhere; window boxes in London, back yards in Wales, tiny, dank gardens in the suburbs, even the back of my car (cars make brilliant greenhouses) until I finally landed an allotment and threw myself into it with naive gusto. Fortunately, there were plenty of people with decades more experience than I had, who could steer me in the right direction when needed.

But it wasn't until children came along that I really began growing for health. Instinctively, I felt that there was something unsavoury about shop-bought fruit and veg: watery carrots, insipid salad, waxy apples, spongy aubergines, homogenous courgettes. No wonder so many children refused to eat vegetables. But flavour is only half the story. Not only are conventionally-grown, mass-produced fruit and vegetables lacking in taste, they are also lacking in nutritional quality.

Ground-breaking research carried out at Newcastle University found significant nutritional differences between organic and non-organic crops, with organic ones containing substantially more antioxidants.1 Concentrations of key antioxidants such as polyphenolics, which have been linked to a reduced risk of chronic diseases, including cardiovascular and neurodegenerative diseases and certain cancers, were found to be up to 60 per cent higher in organically-grown crops.

In fact, it was discovered that switching to eating organic fruit, vegetable and cereals – and food made from them – would provide additional antioxidants equivalent to eating between 1-2 extra portions of fruit and vegetables a day. The study, which was published in the British Journal of Nutrition, also found that organic crops were far less likely to be contaminated with pesticides and toxic heavy metals such as cadmium, which is one of only three metal contaminants along with lead and mercury for which the European Commission has set maximum permitted contamination levels in food. Cadmium, which is classified as a human carcinogen, was found to be almost 50 per cent lower in organic crops, along with pesticide residues, which were four times more likely to be found in conventionally-grown crops.

Harvesting your own healthy crops is the final reward for all that effort.

More than 300 chemicals such as benzalkonium chloride and thiophanate-methyl can be used in non-organic farming and these may still be present in non-organic food, even after washing and cooking. Government reports reveal that pesticide residues are found in a high percentage of UK foods, and many fruits and vegetables contain traces of not just one, but several different chemicals.2 For example, routine testing of blueberries and blackberries in 2015, found that 55 out of 96 samples contained pesticide residues, four of which measured above maximum residue levels, and 38 samples contained multiple residues – in some cases as many as six different chemicals.3 In short, organically grown fruit and vegetables are higher in healthy substances, and lower in potentially harmful ones. They also taste better.

But shop-bought organic foods are often prohibitively expensive. Throw in the word superfood, and you can double, or even triple, your shopping bill. The obvious, affordable and entirely feasible solution is to grow it yourself. Growing your own food means super quality at a fraction of the cost.

Of course, there will be challenges along the way: battalions of slugs; outbursts of weather; seedlings that fail to get off the ground (literally;) and people who tell you it's not worth the hassle. Ignore them. Because in the end, nature prevails and you will discover that you don't need to be an expert to grow enough food to eat, or to feed a family. What's more, you can feel secure in the knowledge that the food you grow is nourishing, fresh and safe and is in fact, a super food. And nothing beats the satisfaction of that.