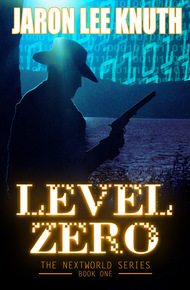 Jaron Lee Knuth was born in western Wisconsin in 1978. Suffering from multiple illnesses as a young child, he was forced to find an escape from his bedridden existence through the storytelling of any media he could find. Science fiction and fantasy novels, television programs, films, video games, and comic books all provided him with infinite worlds for his imagination to explore. Now he spends his days creating stories and worlds in the hope that others might find somewhere to escape as well.

The never-ending wars, pollution, and overpopulation of the near future have caused the outdoors to become uninhabitable, and the government is forced to create a new world, a virtual existence that allows civilization to continue. Shopping malls, schools, concert venues, and religious gathering places all exist in the infinite confines of this new reality, yet the most popular domain for most teenagers is the one that houses the endless array of digital games. When the sequel to a popular title is released to the public for a special beta test, a group of players eagerly log in to try out the new experience. What seems like harmless violence quickly turns all too consequential when the players realize the game's biggest error: They can't log out. Forced to battle their way through an endless army of monsters programmed to kill their avatars, the players must fight against the clock and find a way out of the game before the real world catches up to them.

Jaron Lee Knuth is a talented writer also known for his post-zombie-apocalypse fiction. His contribution to this bundle, Level Zero, explores a futuristic cyberpunk world where civilization continues to exist inside virtual reality, and raises the question of what it means to be “real.” –Anthea Sharp

I hate the real world.

In the real world I'm a fifteen-year-old with pencil-thin arms that can barely lift my own acne-marked body, but in the virtual reality of NextWorld, my avatar looks like an old-west cowboy named Arkade. I've got a dark tan and a five o'clock shadow covering the squarest jaw I could design. My arms are muscular. My chest is wide. My eyes are a steel-blue that look out from under my wide-brimmed cowboy hat with a piercing glare. I'm awesome.

Everything is better in NextWorld. It offers a virtual domain for every kind of person, no matter how unique. There's DOTkid for the adolescents and babies that want to play with colorful dinosaurs and run around on rainbow roads. DOTedu is where the government forces me to spend at least six hours a day learning about authorized facts. DOTsoc has an infinite number of dance clubs, concerts, and social gatherings for even the most specific of interests. DOTcom is full of shopping districts offering all the digital products you might need: clothes, vehicles, or even real estate. But it's also home to all the auction houses and flea markets that sell used digital items of all kinds. DOTorg is a "free" domain designed like an outdoor park, originally intended for family reunions, parties, or just a gathering place for the public, it ended up being an open forum for the disenfranchised to complain about their insignificant troubles. DOTnet houses the infrastructure of NextWorld, but the sewers of this domain are also where the hackers and illegal traders tend to hang out, in abandoned connections that not even the all-seeing, all-knowing DOTgov can watch. And do I even need to explain what goes on in the shadows of DOTxxx?

The domain I spend all of my time in is DOTfun, where all the online games exist, offering race tracks, flight simulators, combat battlefields, role-playing games, puzzle boards, and sports arenas of every kind. I play them all, but my current favorite is DangerWar. I'm good. I'm really good. It's not like my Player-Character name is in the top ten on the DangerWar scoreboard, but I've got close to one million kills, which just proves how much time I spend logged-in.

Tonight I'm playing the "Haunted Mansion" map in DangerWar, one of a hundred different scenarios. I've already killed fifteen of them, and according to the scoreboard, there's only six left. Most of the players I've seen so far have been stumbling around the map, hoping and praying that wild swings of their swords and spraying bullets from their guns might manage to kill another player through sheer luck.

It's an easy night for me.

Flames crackle in a stone fireplace, filling the haunted mansion's library with an orange glow. Above the mantle, a painting of a decaying man watches my every move with eyes that follow me. As I step around the books that eerily float across the room from one bookshelf to another, I hear two different battles happening. The rattle of gunfire seeps through the floorboards below me, and the clanging sounds of a sword fight come from the room next to me. I check my ammunition and smile when I see plenty of rounds left in my shotgun. When I stop and pay attention to the different sounds of each gunshot, I can tell it's coming from four different guns. Two groups of players are firing from protected cover and wasting ammo.

I hate groups. I always play solo. I've never trusted other players, and I have no time for small talk with some little kid who doesn't even know how to play.

I press my boot on the floor and feel the weak boards bend under my weight. I reach into the satchel on my hip and dig out one of my plastic explosives. The item is expensive, but if I can take out the four players in the room below me, the price will be well worth it.

The explosive adheres to the floor with a pink, gummy backing that helps it to stick in place. I select a five-second timer and push the green flashing button. As soon as the counter begins, I walk away from the bomb and toward the sounds of the apparent sword fight coming from the next room.

I step toward the doorway, but a tall man wearing a tightly buttoned suit is holding a silver platter and blocking the entrance. On the platter is a curled up cobra that might have startled me if I hadn't played this map a thousand times. I recognize the manservant as an NPC (a "Non-Player Character" controlled by the game) so I shove the useless distraction to the side and look inside the room. Two players are swinging metal weapons at each other, taking turns blocking attacks. One of them designed their avatar like a classic ninja wearing a black gi and wielding a katana sword. The other has the body of a demon, complete with horns and a long pointed tail, and he's wielding a curved scythe. They both turn toward the doorway when they hear the plastic explosive blow up behind me. Four names appear in front of me, a red X scratching over the top of each one to acknowledge my kills.

"Sorry to interrupt your dance recital," I say, my teeth clenched together around a single toothpick.

One shotgun round blasts the ninja in the chest. His body shatters into three-dimensional pixels, tiny cubes that sprinkle against the floor before dissolving into nothingness. The demon jumps to the side, throwing out a swarm of knives in my general direction as I pump another round into the chamber of my shotgun. I barely need to lean my head to the side in order to dodge the spinning blades. They stick into the wall behind me.

I release another blast from my gun, but it only splinters a wooden bench after the demon dives behind it. He pops his head up, trying to lure me into firing again so he can charge me while I reload, but I stand my ground. I sidestep to the right, keeping my back against the wall, circling the room so I can get a better angle on the player.

As I step around a purple velvet chair and place myself next to the NPC manservant, the demon leaps out, charging me with his scythe held high above his head. I grab the tall NPC and shove him toward the swinging blade. I watch his silver platter fall to the floor as the scythe cuts the NPC in half. I lift my shotgun and pull the trigger. The barrel is only inches from the demon's face when the blast disintegrates his body. As the game crosses out his name in front of me, I wonder what the death must have looked like from his point of view.

The haunted mansion melts from my view, leaving my avatar floating in a smokey mist. Multiple flashing screens appear in front of me. I reach out and touch the statistics for the game, and the screen enlarges. The Koins awarded to me for winning drop out of the sky, and I hear the satisfying noise of them clanging against each other inside the treasure chest that represents my personal inventory. It isn't much, but the game items I need are inexpensive. I make do with very little.

If I were a better player, like those in the top ten, I could make a decent living selling Koins in one of the DOTcom auction houses. The less experienced players are willing to spend real world credit on in-game Koins so they can boost their character's inventory, but real world credit doesn't interest me, nor does helping other players cheat. As long as the government keeps giving me payment vouchers for being a student, and those vouchers keep my account active, I don't need anything from the real world. The thought of graduation, and the end of those vouchers, makes me cringe.

I reach out and touch the item shopping screen, ready to replenish my stock of ammunition and plastic explosives, but an alarm sounds.

I sigh with annoyance, but as soon as I hear the reminder, I feel my stomach growl. Some citizens can afford devices that funnel vitamin paste into their bodies and siphon any waste they excrete, eliminating any need to log-out, allowing them to live inside NextWorld twenty-fours a day. The price for such a device is so astronomical that it's unrealistic for someone who lives solely off student vouchers, but that doesn't stop me from dreaming.

I gesture for the log-out controls and push the large green button that rises from the smokey mist. I feel that familiar static tingle in my brain and close my eyes. When I open them, I'm staring at the illuminated metal interior of my E-Womb.