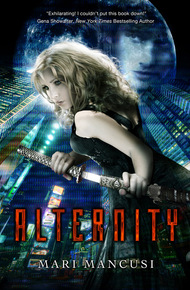 Mari Mancusi always wanted a dragon as a pet. Unfortunately the fire insurance premiums proved a bit too large and her house a bit too small—so she chose to write about them instead. Today she works as an award-winning young adult author and freelance television producer, for which she has won two Emmys.

When not writing about fanciful creatures of myth and legend, Mari enjoys goth clubbing, cosplay, snowboarding, watching cheesy (and scary) horror movies, and her favorite guilty pleasure—playing videogames. A graduate of Boston University, she lives in Austin, Texas with her husband Jacob, daughter Avalon, and their dog Mesquite.

Imagine waking up in a post-apocalyptic, nightmare world—and being told your whole life is but a dream. Skye Brown thought she was your typical college student—good grades, hot boyfriend, and an internship that pays her to play videogames. But then she started having the dreams.

In her dreams, there is no Earth. Only Terra, a bleak, underground wasteland where people live in squalor and oppression. In her dreams, there is no Skye—only Mariah, a rebel leader fighting against a vile, dystopian regime. And then there's Dawn, a handsome, but haunted solider who sees her as but an empty shell of the girl he once love—a betrayer he vows to hate forever, despite what she sees deep in his eyes.

Now, ripped between Dark Siders and club kids, the mundane and the mystic, Skye finds herself in a fight against time—to learn who she really is, where she belongs..and why. The shocking truth will have her questioning her own reality...and her heart.

A few years ago, I read Mari Mancusi’s book, Gamer Girl, and was hooked on her storytelling. She waves elements of gaming seamlessly into her writing, and Alternity delivers, with a tale that leads the reader right into the heart of what’s real, and what’s just a game. The answer might surprise you. –Anthea Sharp

I am running for my life. That much I know as the heels of my silver boots clink a staccato beat against the metallic road below. But where am I? Who's chasing me? And, most importantly, why?

I have no idea.

A strange chant seems to echo through my head, begging for speed with an urgency I can't comprehend. Endless demands competing with my own frantic thoughts skitter across my brain like a bum needle on a worn record.

Where am I? Run faster. Who's chasing me? Run harder. And why? Run from the moon.

But there is no moon. The corridor is black, skyless, deep underground. And I'm already running as fast and as hard as I can.

Sucking in a breath I attempt to take in my surroundings without slowing down—trying to think, to process, to find a shred of familiarity in the dark steel beams crisscrossing the tunnel's ceiling, the mammoth fans cut into the walls expelling hot, sour air. It all seems so familiar and yet at the same time completely foreign. Like a deja vu pricking at the dark recesses of your brain, or a name on the tip of your tongue—the one you always remember at 3:00 a.m., when it no longer matters.

"Don't let her reach the hatch!"

My heart slams against my chest as I realize my pursuers—whoever they might be—aren't far behind. Sweat pools in the hollow of my throat, then drips down, soaking my breasts. My muscles burn, my lungs refuse to take in air, I can barely swallow, and my vision has gone spotty. Soon I'll have to stop. To take a break.

But to stop is to die. That much I know. And so I keep running.

I turn a corner and my bleary eyes catch sight of a ladder in front of me, embedded firmly into the wall, a potential salvation ascending into the darkness. Where does it go? Could it lead to the hatch my enemies seek to keep me from? To stop and check it out will eat up valuable time—time I don't have. But I have to take a chance. I can't run forever.

I throw myself against the ladder, wrapping my hands around each rung as I climb, step after step. The ground falls away, and with it the dim tunnel lighting. Soon I am engulfed in blackness.

A few seconds later I bang my head against something, almost falling off the ladder from the impact. I steady myself, then reach up with one hand, fingers exploring the ceiling until they come upon a latch. More frantic exploration reveals a handle. There's definitely some kind of trapdoor.

I hear feet clanging against the metal rungs as my pursuers start up after me. I don't have much time left. Wrapping my hand around the trapdoor handle, I yank on it with all my might. This is my one chance to escape.

I pound on the door, my heart exploding in my chest as I realize that I likely have precious seconds to live. Surprisingly, my life does not flash before my eyes; in fact, I'm still having difficulty remembering any life at all. Who I am. What I do. How I got into this mess.

Run from the moon, the mysterious voice in my head demands.

"Shut up," I mutter, tired of its nonsensical advice.

The first man reaches me, paws at my feet through the darkness. "We've got her!" he cries. And indeed, it seems he has.

Not willing to give up without a fight, I slam my foot down on his hand, the stiletto heel driving into his palm. A crunch of bone. A yelp of pain. I repeat the blow, then follow up with a wild kick to where I estimate his head to be, all the while clinging to the ladder for dear life. I don't miss. Knocked off balance he loses his grip, falls backward, and hurtles screaming down into the blackness below. A sickening thud, followed by silence, tells me he's likely met his maker.

But his death is not enough to save me. The second guy is right behind him and much more prepared for my alley cat tactics. There's a flash of light—a crimson beam cutting through the darkness—then a sharp, icy pain spreading up my ankle, shooting through my veins at a lightning pace, reaching my toes, my fingers, my brain—one after another. My grip loosens, my head swims, my muscles fail. At first I fear he'll just let me fall, hurtle down to my death. But my attacker grabs on instead and starts dragging me down the ladder.

At the bottom, the men flip me over so I'm lying on my stomach, spread-eagle on the ground. I can't move at all, my body is Jell-O, my muscles completely useless.

Three men kneel above me, armed with scary-looking tools, including something that looks like a high-tech electric syringe, complete with gauges and lights and a really long needle. I'm not sure what it does, but I know for a fact that I don't want it done to me.

The first man reaches into his bag and pulls out a small silver box. He presses his thumb against the top. The box beeps and flashes a green light, then pops open, revealing a vial of some sort. He presents the vial to the man with the syringe, who takes it and sticks the long needle inside, sucking up the unidentified contents. The syringe beeps in approval and a few green lights flash in sync.

"Are you ready, my dear?" the man with the gun asks, his lips curled in a sneer. He's big, built like a soldier and sporting a trim gray beard. He's wearing a shiny metallic jumpsuit, pulled tight by a black tool belt.

"Please!" I beg, not thinking for one second that anything I say will make a difference, but at the same time desperate to try. "Just let me go!"

The men laugh, shaking their heads in mirth. "Oh, you'll go all right," replies the second guy. He's smaller than the first, but no less menacing. "Pow!" he quips. "Straight to the moon."

They grab my arm and flip me over. I watch helplessly as they stab me with the syringe, injecting silver liquid into my unwilling veins. I scream and scream and scream, knowing it will do no good. Knowing that there's no escape.

Like it or not, I'm going to the moon.