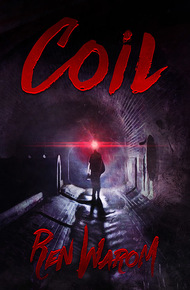 Ren Warom lives in the West Midlands with her children, her cat-pack, a snake called Marvin, and innumerable books. She's currently pursuing a PhD and thinks she may have lost her mind. If you find said mind, please return in a secure, locked box to the address on the collar. Do not, repeat, do not, attempt to feed it! Thank you.

Bone Adams is a legend, the best mortician in the Spires, and a man without modification in a world where body mods define humanity. When a new killer begins leaving bodies stripped of mods but twisted and bent into grotesque pieces of art, City Officer Stark tasks Bone to unravel the clues, few though they may be.

As more victims are discovered, Bone and Stark get drawn deeper into a world where pain and personal statement blend and blur, and finally end up hunting for a semi-mythical, man-machine named Burneo deep within the labyrinth of the sewers.

But things aren't what they seem, and while searching for Burneo, Bone and Stark discover a hidden lab full of evidence of horrific abuses of science and experimentation. Meanwhile, the killer is still on the loose, and, as Stark becomes more and more obsessed with the case, Bone is forced to a shattering realization. Everything is connected, the killings, the gang activity, the labs, and his own past, and unless he can figure out how, he's not going to survive.

Ren Warom is one of British SF's best kept secrets, a writer who quietly produces exceptional work, including several recent novels of modern cyberpunk. If you don't know her, I hope Coil will serve as an introduction! – Lavie Tidhar

Black eyes cold as the icy ground, Stark surveys the Wharf Guard tanks squatted like grey toads in front of Wharf End's imposing tenements. Behind their stolid presence, yellow tape crackles, and grim-faced Wharf Guards hold formation, bulky in winter uniform. Most residents may have left this part of the Wharf, but the gang folk haven't. This is Broken Saints territory. Attack is not only possible, but fully anticipated, and the Guards are a line of tension, fit to snap. Stark can't fault their unease. There's something about this case; a subtle but unpleasant pall of ill fortune, bleeding back through the horrors faced by the victims, the awful isolation of their deaths. And here it is, too, this case, leading him back to where he was born: to where he died. To where Teya's face rises with such crystal clarity, he could reach out and wipe the tears from her eyes.