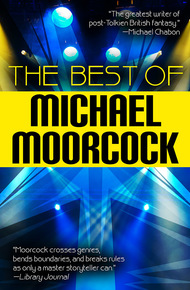 Michael Moorcock is among the most influential British authors of fantasy, science fiction, and mainstream literature. His many novels include the Elric series, the Cornelius Quartet,Gloriana,Mother London, andKing of the City. Moorcock has received the Nebula, World Fantasy, and British Science Fiction awards and is a Grand Master of the Science Fiction and Fantasy Writers of America. As editor of the science-fiction magazineNew Worlds, Moorcock was one of the progenitors of the experimental and controversial new-wave literary science-fiction movement. His nonfiction has appeared in many UK outlets, including theGuardian,Daily Telegraph, andNew Statesman. A member of the progressive rock band Hawkwind, Moorcock received a platinum disc for the albumWarrior on the Edge of Time.

Michael Moorcock: Legendary author of the Elric saga; Science Fiction Grand Master; Platinum album–selling rock star; and controversial editor of New Worlds. In this definitive collection, discover the incomparable stories of one of our most versatile storytellers.

Here you will find Moorcock's work at its finest. Offerings include the Nebula Award–winning novella "Behold the Man," which introduces a time traveler and unlikely messiah that H.G. Wells never imagined; "The Visible Men," a tale of the ambiguous and androgynous secret agent Jerry Cornelius; the trilogy "My Experiences in the Third World War," in which a Russian agent in an alternate Cambodia is powerless to prevent an inevitable march toward nuclear disaster; and "A Portrait in Ivory," a Melibone story of troubled anti-hero Elric and his soul-stealing sword, Stormbringer. Newer work includes one previously unpublished story and three uncollected stories.

Michael Moorcock needs no introduction. He single-handedly reinvented British SF in the 1960s with New Worlds Magazine, created the lasting legacy of Elric just to pay for the magazine, and has influenced generations of science fiction and fantasy writers to this day. This collection is a must-have. – Lavie Tidhar

From "A Portrait in Ivory"

We begin this collection with a tale of Elric of Melniboné. Proud prince of ruins. Kinslayer. Call him what you will. He remains, together with maybe Jerry Cornelius, Moorcock's most enduring, if not always most endearing, character.

Elric started life in response to a request from John Carnell, editor of Science Fantasy magazine, for a series akin to Robert E. Howard's Conan the Barbarian stories. What Carnell received, while steeped in sword-and-sorcery images, was something quite different. The first tale to feature the albino emperor of Melniboné was "The Dreaming City" in 1961. In all, nine Elric stories appeared in the magazine between then and 1964. They formed the basis of two books, The Stealer of Souls and Stormbringer, although Moorcock has gone on to write many prequels and sequels to events therein.

"A Portrait in Ivory" was written in 2005, for an anthology of stories crafted around winning words from the Scripps National Spelling Bee. The editor asked contributors to choose a word; Moorcock picked "insouciant." This particular tale is set after the sacking of Imrryr, capital city of the Dragon Isle of Melniboné. It finds Elric—a shunned, outcast mercenary, wandering the Young Kingdoms over which his nation once ruled—in a contemplative, rather than a combative, mood. It was originally published in 2007, in Logorrhea: Good Words Make Good Stories (Bantam), edited by John Klima.

1: An Encounter with a Lady

Elric, who had slept well and revived himself with fresh-brewed herbs, was in improved humour as he mixed honey and water into his glass of green breakfast wine. Typically, his night had been filled with distressing dreams, but any observer would see only a tall, insouciant "silverskin" with high cheekbones, slightly sloping eyes and tapering ears, revealing nothing of his inner thoughts.

He had found a quiet hostelry away from the noisy centre of Séred-Öma, this city of tall palms. Here, merchants from all over the Young Kingdoms gathered to trade their goods in return for the region's most valuable produce. This was not the dates or livestock, on which Séred-Öma's original wealth had been founded, but the extraordinary creations of artists famed everywhere in the lands bordering the Sighing Desert. Their carvings, especially of animals and human portraits, were coveted by kings and princes. It was the reputation of these works of art which brought the crimson-eyed albino out of his way to see them for himself. Even in Melniboné, where barbarian art for the most part was regarded with distaste, the sculptors of Séred-Öma had been admired.

Though Elric had left the scabbarded runesword and black armour of his new calling in his chamber and wore the simple chequered clothing of a regional traveller, his fellow guests tended to keep a certain distance from him. Those who had heard little of Melniboné's fall had celebrated the Bright Empire's destruction with great glee until the implications of that sudden defeat were understood. Certainly, Melniboné no longer controlled the world's trade and could no longer demand ransom from the Young Kingdoms, but the world was these days in confusion as upstart nations vied to seize the power for themselves. And meanwhile, Melnibonéan mercenaries found employment in the armies of rival countries. Without being certain of his identity, they could tell at once that Elric was one of those misplaced unhuman warriors, infamous for their cold good manners and edgy pride.

Rather than find themselves in a quarrel with him, the customers of the Rolling Pig kept their distance. The haughty albino too seemed indisposed to open a conversation. Instead, he sat at his corner table staring into his morning wine, brooding on what could not be forgotten. His history was written on handsome features which would have been youthful were it not for his thoughts. He reflected on an unsettled past and an uneasy future. Even had someone dared approach him, however sympathetically, to ask what concerned him, he would have answered lightly and coldly, for, save in his nightmares, he refused to confront most of those concerns. Thus, he did not look up when a woman, wearing the conical russet hat and dark veil of her caste, approached him through the crowd of busy dealers.

"Sir?" Her voice was a dying melody. "Master Melnibonéan, could you tolerate my presence at your table?" Falling rose petals, sweet and brittle from the sun.

"Lady," said Elric, in the courteous tone his people reserved for their own high-born kin, "I am at my breakfast. But I will gladly order more wine…"

"Thank you, sir. I did not come here to share your hospitality. I came to ask a favour." Behind the veil her eyes were grey-green. Her skin had the golden bloom of the Na'äne, who had once ruled here and were said to be a race as ancient as Elric's own. "A favour you have every reason to refuse."

The albino was almost amused, perhaps because, as he looked into her eyes, he detected beauty behind the veil, an unexpected intelligence he had not encountered since he had left Imrryr's burning ruins behind him. How he had longed to hear the swift wit of his own people, the eloquent argument, the careless insults. All that and more had been denied him for too long. To himself he had become sluggish, almost as dull as the conniving princelings and selfimportant merchants to whom he sold his sword. Now, there was something in the music of her speech, something in the lilt of irony colouring each phrase she uttered, that spoke to his own sleeping intellect. "You know me too well, lady. Clearly, my fate is in your hands, for you're able to anticipate my every attitude and response. I have good reason not to grant you a favour, yet you still come to ask one, so either you are prescient or I am already your servant."

"I would serve you, sir," she said gently. Her half-hidden lips curved in a narrow smile. She shrugged. "And, in so doing, serve myself."

"I thought my curiosity atrophied," he answered. "My imagination a petrified knot. Here you pick at threads to bring it back to life. This loosening is unlikely to be pleasant. Should I fear you?" He lifted a dented pewter cup to his lips and tasted the remains of his wine. "You are a witch, perhaps? Do you seek to revive the dead? I am not sure…"

"I am not sure, either," she told him. "Will you trust me enough to come with me to my house?"

"I regret, madam, I am only lately bereaved—"

"I'm no sensation-seeker, sir, but an honest woman with an honest ambition. I do not tempt you with the pleasures of the flesh, but of the soul. Something which might engage you for a while, even ease your mind a little. I can more readily convince you of this if you come to my house. I live there alone, save for servants. You may bring your sword, if you wish. Indeed, if you have fellows, bring them also. Thus I offer you every advantage."

The albino rose slowly from his bench and placed the empty goblet carefully on the well-worn wood. His own smile reflected hers. He bowed. "Lead on, madam." And he followed her through a crowd which parted like corn before the reaper, leaving a momentary silence behind him.