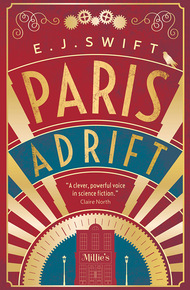 E. J. Swift is the author of the Osiris Project trilogy (Osiris, Cataveiro and Tamaruq), a speculative fiction series set in a world radically altered by climate change. Her short fiction has appeared in a variety of publications from Solaris, Salt Publishing, NewCon Press and Jurassic London. Swift also contributed to Strata – an interactive digital project by Penguin Random House.

Paris was supposed to save Hallie. Now… well, let's just say Paris has other ideas.

She's linked to a hole in time and chosen by fate to prevent a terrible war. Tumbling through Paris' turbulent past and future, Hallie changes the world—and falls in love.

But with every trip, she loses a little of herself, and every change she makes ripples through time, until the future she's trying to save suddenly looks nothing like what she hoped for…

Emma (E.J.) Swift came blazing into science fiction with Osiris back in 2012 and will one day, I think, be recognised as the major talent she is, whether in genre or elsewhere. Here she visits being young and in Paris, an experience I share and can never get enough of when it appears in fiction. Only in Paris Adrift, time travel complicates, well, everything. – Lavie Tidhar

I've been in Paris for three weeks when I find myself outside Millie's, the bar next door to the Moulin Rouge, the bar I am told will employ anyone with a pulse. Gathered at my back is the neon riot of boulevard de Clichy. Together with boulevard Barbès, Clichy cordons off the eighteenth arrondissement from the rest of the city. Noisy, congested, segmented with sex shops and kebab kiosks and tourists in fur coats queueing for the cabaret, spilling out drinkers from midnight until morning, its central aisle is riddled with addicts, dealers, sightseers and the homeless—whose ranks I am shortly to join, if this afternoon doesn't go as planned.

I approach the entrance, then swerve away, my hands sweating. On the pedestrian concourse in the centre of the boulevard, two girls are taking a selfie on the Marilyn Monroe air feature, skirts billowing up around their thighs. I turn back. I've already wasted thirty minutes wandering up and down, trying to summon the courage to go inside. Something keeps drawing me back.

This is ridiculous, Hallie—even by your standards.

I set my shoulders and walk towards the double doors. This time I'm ready. As I reach for the handle, someone pushes from the other side; the door moves towards me faster than I anticipated, and next thing I know I'm flat on my arse.

I scrabble back. A slender boy dressed entirely in black appears from the other side of the door. He extends a cautious hand.

"Don't you look where you are going?"

He sounds amused by the situation. I am not, and my nose is beginning to throb painfully. My voice comes out taut and high pitched.

"You opened the door on me!"

"Probably because you're wearing those fancy shades," I snap. "Indoors."

He lowers the sunglasses and winces.

I touch it tentatively, and encounter blood.

"Come inside, I'll get you a drink," declares the boy, as though this will fix the swelling in the middle of my face. I give him a proper appraisal. Dark hair and brown skin; a sculptor's dream of a face with perfectly symmetrical features. He is wearing a leather jacket, slim fitting jeans, a pair of patent, pointed shoes and the aforementioned sunglasses.

"Angel, at your service. And you?"

It's out before I can catch myself. All this time I've spent trying out alter egos and now, when it matters, I've reverted. How amateurish.

"The Americans love it, they think I am a slayer of dark forces. You're anglaise, yes?"

It would be rude to ask if he's French, so I don't, but Angel evidently reads the question.

"Oh." I feel the heat rising to my face.

"Not that I would be allowed in Algeria today."

He doesn't expand upon this statement and its exact meaning is left unclear—is he gay? Does he have a criminal record? Embroiled in social awkwardness, my meticulous planning is unravelling by the second.

Angel takes pity on me.

"I'm from Marseilles," he says gently. "Come on, come inside. Millie's boudoir awaits you."

Angel ushers me through the doors before I have a chance to explain the purpose of my visit. The interior of the bar is dimly lit, and extends back into the building further than I expected. When we enter I hear a high-pitched keening noise, almost tinnitus, putting pressure against my ears. I hang back, worried it might prompt an attack, but then the noise and my head clear. I reassure myself: it's going to be all right.

We go up to the bar, where an elfin woman with a blunt, heavy fringe and a dragonfly tattoo at her collarbone is the only visible staff member. She is stripping mint leaves from their stalks with brutal efficiency and tossing them into a plastic box. Seeing Angel, she frowns, as though indecisive about how his return should be greeted. Angel hoists himself up onto the bar and kisses her on both cheeks.

Eloise gives me a cursory glance.

"It was an accident," I say, then wonder why I'm defending him. He could have broken my nose.

Eloise relinquishes her bundle of mint with a ponderous sigh. Slowly she walks to the other end of the bar, and returns equally slowly with a single piece of tissue. I dab at my nose, wincing. Eloise trickles vodka into a shot glass and inches it over the counter with a gladiatorial stare. I look from her to Angel. It's five pm, respectably into l'heure verte, but I haven't eaten anything since breakfast.

"Our redemption! There you go, Eloise. You needed a new girl for tonight, here is one right here, looking for a job."

Eloise looks pointedly at the vodka.

"I was not looking for some harlot you bring in from the street."

"Eloise," purrs Angel before I can protest.

"Well, maybe. I guess we could do with some more people tonight. I suppose. I'll have to see if Kit's about. You leave everything to the last minute, Angel, and why is there only one bottle of Grey Goose on the top shelf? One! We had ten last week. Don't tell me you've been giving it out to the Moulin staff?"

"No, no, no, no. Kit gave it out, most definitely it was Kit. Now where's that planning for tonight? You're my favourite poussin, you know, Eloise."

"Everyone's your favourite poussin," snaps Eloise. "And anyway I'm your manager, I get to say who is the favourite, poussin or no poussin."

"This guy called Léon sent me," I say, when I can finally get a word in. Angel and Eloise exchange looks. "I mean—" I stumble on. "I said I was looking for a job—he said to try here—he said to say he recommended me."

"Did he now," says Eloise. Her voice is loaded with indecipherable meaning. She turns away. I'm beginning to regret taking the advice of some random guy who happened to be sitting next to me in the brasserie. If it hadn't been for that smile…

"Eloise is one of the night managers," Angel explains, when Eloise has stepped off the bar. "She does not like girls. Dutch," he adds, thoughtfully.

"What's she got against girls?"

"She doesn't trust them."

Flustered, I say, "Whatever she thinks they're like. Should I not have mentioned that guy? Léon?"

"Oh, Léon," says Angel, as though this should explain everything. I change tactic.

"Kit is the top manager." Angel leans over and plucks a few mint leaves from the box. From the other end of the building, Eloise glares and Angel blows her a kiss. "This mint is brown. Brown mojitos, that is revolting. It was Kit who hired me."

"Oh—no. Millie doesn't work what you would call regular hours."

"Okay." I digest this. "What's the worst thing you've ever had to do?"

"When I worked the nights, I had to clean up vomit all the time. Now I am days. You would start with the nights."

Vomit, whilst far from pleasant, does not scare me. I doubt Angel has ever had to clean up after his mother decided to siphon her own blood for an art installation. I push the thought of her—of back there—aside.

Eloise comes back and says Kit will see me. I wipe the rest of the blood from my nose and follow her into the back room, where two boys are unstacking armchairs and arranging them into lounge seating. Steps lead down to a wide dance floor and a second bar, smaller than the first. From a DJ box, a guy in a tight T-shirt and cargos is checking the lights.

I pass up my CV, an uneventful affair which I have embroidered with a few industry relevant jobs. The manager, Kit, inspects it.

"That's right." I wait. He doesn't say anything. "I studied mineral compounds, that kind of thing. It's kind of like mixology. I mean, obviously the fields are different, but there are definitely parallels. Intersections." Stop talking. "And I'm a very hard worker. I apply myself. You won't regret hiring me, I promise." Just stop.

"We take bartending very seriously here," says Kit. I restrain myself from saying that it is unlikely to be taken too seriously anywhere else, and offer a chirpy smile. "Your CV says you started university two years ago," he continues. "So you haven't finished."

I clasp my hands together tightly. Remember the octopus, Hallie. The octopus avoids detection through its faultless camouflage, and you—you are the octopus.

The manager's expression suggests it is far from that, but he says, "Can you do a trial tonight?"

"Fine. You start at eight."

I emerge provisionally employed, and tell Angel the good news. He tells me I have just missed his dear poussin Gabriela, who he swapped shifts with for tonight, but never mind because it is now the perfect time to go for a beer and meet the staff at the bar down the road. In the hour before my baptism, Angel gives me a short but unsparing run down on all of the staff, most of which I forget instantly. One pint turns into two pints plus tequila and by the time we amble back up the road I am feeling quite light-headed. Again it occurs to me that I have forgotten to eat.

This is about all the training I will ever need to work at Millie's.