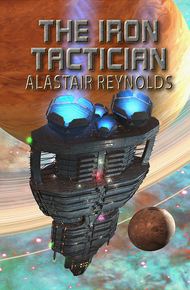 Alastair Reynolds was born in Barry, South Wales. He went on to study space science, and eventually worked for the European Space Agency in the Netherlands. He started writing science fiction not long after that birthday but took a little longer to get into print. He is now the author of nineteen novels, several novellas, and more than seventy short stories. His most recent books are Elysium Fire (2018), Shadow Captain (2019) and Bone Silence (2020). He has won many awards, including Sidewise, Locus, and Seiun Awards, and been shortlisted for many more. He returned to Wales in 2008.

The Iron Tactician by Alastair Reynolds

When Merlin encounters the derelict hulk of an old swallowship drifting in the middle of nowhere, he can't resist investigating. He soon finds himself involved in a situation that proves far more complex than he ever anticipated.

I reviewed Al Reynolds' first novel – the superb Revelation Space – back when it was published, and I adore his work – everything from his novels to his short stories. Here is a fantastic short novel by this master of SF, who is also a thoroughly nice guy. I run into Al every now and then – whether in the grotty charms of a holiday camp in Wales (the unlikely setting of an SF convention one year) to a fancy event at the Royal Observatory in Greenwich, and it is always a blast to see him. – Lavie Tidhar

Merlin felt the old tension returning. As he approached the wreck his mouth turned dry, his stomach coiled with apprehension and he dug nails into his palms until they hurt.

He sweated and his heart raced.

'If this was a trap,' he said, 'it would definitely have sprung by now. Wouldn't it?'

'What would you like me to say?' his ship asked, reasonably.

'You could try setting my mind at ease. That would be a start. It's one of ours, isn't it? You can agree with me on that?'

'It's a swallowship, yes. Seven or eight kiloyears old, at a minimum estimate. The trouble is, I can't get a clean read of the hull registry from this angle. We could send out the proctors, or I could just sweep around to the other side and take a better look. I know which would be quicker.'

'Sometimes I think I should just let you make all the decisions.'

'I already make quite a lot of them, Merlin – you just haven't noticed.'

'Do whatever you need to do,' he said, bad-temperedly.

As Tyrant swooped around the wreck, searchlights brushed across the hull like delicate, questing fingertips, illuminating areas of the ship that would have been in shadow or bathed only in the weak red light of this system's dwarf star. The huge wreck was an elaborate flared cylinder, bristling with navigation systems and armaments. The cylinder's wide mouth was where it sucked in interstellar gas, compressing and processing it for fuel, before blasting it out the back in a vicious, high-energy exhaust stream. Swallowships were ungainly, and they took forever to get up to the speed where that scoop mechanism was effective, but there was nowhere in the galaxy they couldn't reach, given time. Robust, reliable and relatively easy to manufacture, there had been only minor changes in design and armaments across many kiloyears. Each of these ships would have been home to thousands of people, many of whom would live and die without ever setting foot on a world.

There was damage, too. Holes and craters in the hull. Half the cladding missing along one great flank. Buckling to the intake petals, beyond anything a local crew could repair.

Something had found this ship and murdered it.