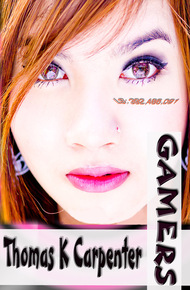 Two points for brushing your teeth. Ten points for keeping your room tidy. Seventy-two points for the Bioeconomic Game Design pop quiz on the ride to school in your personal FunCar. Another thirty for making every hurdle in gym class.

Life is a game, unless you're not the one winning.

Gabby DeCorte, top student and reality-hacker extraordinaire, has been doing whatever it takes to keep her best friend, Zaela, from falling behind in LifeGame. Zaela has gifts of artistry that amaze Gabby, but none of those skills translate in LifeGame and with final exams coming up, they can't afford to waste a single minute. But when a mysterious group called the Frags contacts Gabby claiming to know what really happens to the losers of LifeGame, she must choose between winning and what she believes in.

Thomas K. Carpenter and I met at a fantastic writer’s workshop, and immediately hit it off. When we discovered we were both writing gamer-themed books set in the future, our friendship was sealed. His dystopian future takes a serious look at what happens when everything in life is “gamified,” and what happens when you lose... –Anthea Sharp

The green sky loomed over the high school track like a bowl of pea soup upended. Even the few clouds resembled lumps of pea-sized material suspended in the thoroughly disgusting verdant broth.

Gabby ran around the track, glancing upward, cursing under her breath. Her best friend Zaela, elbowed her in the ribs.

"Come on, our score is dropping," said Zaela.

Gabby checked her LifeScore, annoyingly waiting at the corner of her vision with only a quick leftward eye movement, ready to piss her off. The number had faded to red, indicating a downward trend.

"Give me a sec," she muttered. "Only need another minute."

A gaggle of the Evil Dolls, Gabby's name for them, not theirs, ran by the two girls laughing. Their digital skins made them resemble living dolls, complete with gaps where their joints would be and shiny dead hair. Even their clothing was stiff. Green numbers, indicating upward movement, floated over their heads.

"See!" cried Zaela. "They're three hundred above us! My father's expecting me to be above rank by the end of the week."

Gabby ignored Zaela, who continued to complain about not having much more time before Final Raid. Gabby was comfortably above the probable line that would separate who would earn their Life Class and who got lesser, meaningless jobs. Jobs that didn't have a much responsibility, a title, or many benefits within LifeGame.

Her best friend, Zaela, unfortunately was not, and had been losing ground for the last three weeks. If Zaela failed to make the cut, Gabby would earn her Life Class alone and probably never see Zaela again.

Gabby was not going to let that happen.

The world hack slipped into the Sky.Net school file like she'd done it before, which in fact, she had. Last year she'd made it rain baby pigs during Spirit Day, even tricking everyone's sense-web so they felt a slight impact, though she hadn't gone so far as to make them squish. That would have been too gross. Instead, they bounced like those lame superballs her father always talked about. He was so last century.

Either way, the bouncing piglets had been hilarious. This time she was much more serious. She couldn't let Zaela fail, no matter what it took.

"—be able to get into the Bioeconomic Game Design program at Blizzard University."

When the sky turned to static, cries of surprise erupted across the track. The heads of all the girls running the track game bobbed up like gophers. Gabby wondered if any of them were expecting baby pigs.

It would take a while for the administrators at Neversoft High to counteract her exploit. Gabby counted silently under her breath while they ran.

Zaela squinted at Gabby. "You did this didn't you?"

Gabby made non-committal noises while she continued to count backwards.

She steered her friend to the right side of the track as the sky crackled and changed to an ominous one full of bruised purple clouds seething with electricity. For a brief moment, she thought she saw a black owl flying through the clouds, but then it was gone. She hadn't programmed that into the exploit. Gabby shook her head, deciding it was just her imagination.

"Get ready on my cue." Gabby rested her hand on Zaela's arm so she could indicate when they would have to move.

When Administrator Bracket's face appeared in the sky amid the threatening clouds, a confused sound came from her right.

Zaela raised an eyebrow. "I was sure you were behind this."

The face in the sky, which was actually only appearing on their personal eye-screens, just like their digital skins and most of the coverings for the landscape, barked out a command, as Administrator Bracket was prone to do.

"Attention LifeGamers! We're adding a special bonus round to this game. We are upping the difficulty, so stay sharp!"

Gabby rolled her eyes. Even though this was a segment she'd spliced from a bonus round a few years ago, hearing it reminded her how lame Bracket was.

He was an old military guy that had grown up on the forward bases near the Southlands and they used an old version of LifeGame, so he read the scripts like he was berating a private. The key was that Bracket made the hack seem official, so everyone paid attention.

Obstacles popped up all over the track like bubbles. Hazy questions floated over each obstacle. The two girls neared a candy-striped pole suspended at the height of their ankles.

The floating words solidified as they neared, and as they jumped over the pole, the words kept pace.

"That's so Mario! I studied that last week!" Zaela squealed.

Of course, Gabby knew that. She'd told Zaela to study it, feigning that she'd heard it would be a pop-quiz, having already planned out the hack.

"Because the Greater States of America was losing its competitive edge," answered Zaela.

The question disappeared into green sparkles, indicating a correct answer.

WHAT ARE THE THREE RULES OF LIFEGAME™?

"Another easy one!" Zaela hopped when she clapped, bringing a smile to Gabby's face.

"The first rule is what can be gamed can be improved. The second rule is that everything can be a game and the last rule is to never look backwards because the past is a game that's already been decided."

Gabby smiled and veered to the right so she could answer her own questions. She'd programmed hers to be much harder than Zaela's. Cheat sniffers could tease out patterns in the data and Gabby had to be careful.

A fractal-recombination cube appeared in front of her, demanding a solution. Gabby knew the answer, since she'd programmed it, but purposely got the answer wrong, letting the cube explode into red sparkles.

Answering the question wrong served a double purpose. Those fractal cubes were advanced encryption problems that hackers had to frequently utilize. By answering it incorrectly, she'd keep her profile from ever looking like a hacker.

The next few questions were easier and Gabby dutifully answered them, smiling at the green sparkles exploding around her. The Evil Dolls, however, were a different situation.

Across the track, the gaggle of six girls were trying to leap horrid walls the color of cat puke that were at least half their height. While the walls only existed on their eye-screens, the ubiquitous sensor networks would know if a foot went through one. A failed jump meant a harder question and Gabby had given them near impossible ones.

There were so many red sparkles above the Evil Dolls it looked like an immersive of a dust storm on Mars. Zaela was rapidly catching up. By the end of class, she'd be well into the clear.

Gabby was feeling like she'd just scored a major happiness buff. When the Final Raid came next week, she would get them on the same team and they would win for sure. Then they could get away from the Evil Dolls, who had made their lives a living hell since the earliest ranks. It was all falling into place.

At least until Administrator Bracket's projection appeared next to her, majorly debuffing her happiness. He wore his usual pseudo-military skin, complete with his Administrator trophy badges pinned to his lapel.

"Gabriella DeCorte. I need to see you in my office. Pronto."

Startled by Bracket's appearance, Gabby ran through the next obstacle, exploding it into red sparkles. "What?"

Then his projection winked out.

Gabby's stomach tightened into a face-screwing knot. Getting caught hacking would get her sent back a rank without enough time to catch back up and she wouldn't earn a Life Class.

Gabby left the track and slowly trudged to the lockers to change, feeling like Bracket had cast a massive soul-sucking DoT on her.