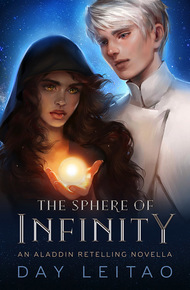 Born in Brazil, she lives in Canada, where she can enjoy snow in April. She loves to create worlds and characters.

The Sphere of Infinity by Day Leitao

Alana's dream is to leave the poverty-stricken, government-controlled planet where she lives with her mother. But that's impossible when she can barely manage enough to eat. Her big chance comes in a well-paid mission to retrieve a golden sphere. The problem: it's in the Ghost Ship, a mysterious alien vessel abandoned for millenia. Nobody has ever set foot on it and come out alive. How will Alana manage it?

Meanwhile, Jasper has come to her planet to oversee the government. His real goal? To see the mysterious dragons—if they are still alive.

Destiny brings them together and thrusts the fate of the Samitri Planet and the Human Universe in their hands.

The Sphere of Infinity is a standalone YA Aladdin retelling novella.

Alana walked quietly through the streets of Samitri as the sun was setting, mingling with the multitude returning from work in the farms. Her hair was tied and hidden under a hat and she wore dark-tinted glasses because she didn't want anyone memorizing her face and perhaps wondering who she was. Technically, she didn't exist in Samitri, so she'd better hide.

When she reached the market, her heart raced with memories of the previous night and her narrow escape. It also tightened with longing remembering a time long gone. The market used to be magnificent, crowded with merchants and visitors. It was reduced to nothing now, with only about one-tenth of the tents working. Her contact wasn't there, but she found Bert, the seller of souvenirs for the now almost non-existent tourists. He'd been her father's closest friend and was one of the few people who knew who she was. He also tended to be well informed.

Alana greeted him, then looked around to check if nobody was close by and said, "I saw a new guard at the port last night, very light blond hair, almost white. Any idea who that might be?"

"The albino boy? He came with the Ringon delegation. Must be security for the prince."

That didn't make sense. "I thought monarchy was over, you know, because it was awful and we're so much better now."

Bert laughed. "He's the son of someone in the Peace Alliance. They're the monarchy now, aren't they?"

"I bet they wouldn't want anyone to call their children prince."

He shrugged. "I call them whatever I want."

"As long as nobody hears it. So this guard's from Ringon." Alana tried to think whether there was any chance he'd come after her, maybe want revenge for being tased. But then, he had such kind eyes, maybe he was just a nice person in the wrong place. Who knows what job opportunities Ringon had. It's not like he'd change anything if he were to guard someone other than the pigs in the government. Alana came out of her reverie and smiled. "Thanks."

Bert had a faint laugh. "Any time."

Alana noticed how none of his dragon figures had sold in weeks. "Do you need anything to eat?"

The man looked down. Right. He was ashamed of not being able to refuse the offer.

Alana said, "Pass by our house later. You're good company. My mom will be happy."

Alana walked away wondering if the albino boy had wanted to be kind to her. Would he maybe help her escape from this planet? Oh, no. Maybe her mother had been right. She had no idea who he was and was already dreaming of escaping Samitri with him. As if he even wanted it. But she'd like to know someone from Ringon, despite their ties to the dirty Peace Alliance.

She had more important things to worry though, and headed to the Blood Tavern, entering through a back door.

Selma was in the back office and fidgeted when Alana entered. "Oh, it's you."

Alana ignored the woman's odd discomfort. "Hey, how are you?"

She shook hands with the woman and passed the chip with information. Who knows how much of a cut the woman took, but it was her best option. Anyway, had it been a fortune, the woman wouldn't be hanging around a stinky tavern. Alana at least wouldn't.

The woman then said, "There's someone I want you to meet."

Alana tensed. She had never spoken to anyone in person. Her assignments were anonymous instructions in encrypted material. A middle-aged woman with thick black hair and black eyes entered the room and gestured to Alana. "Come outside for a drink."

Selma nodded as if meaning that it was all right. Alana followed the strange woman who was too well dressed for someone from Samitri, even counting government officials and farm owners. Well, she could perhaps have something to do with the illustrious visitor in the governor's palace. Alana calmed down thinking that Selma would not want to lose a source of income. In fact, if anything, this was just more business. The woman led her to another room and closed the door.

"You're the Black Mouse, right?"

The woman chuckled. "Afraid like a mouse. This is not a trap, boy, but an opportunity. My name's Mara."

Alana shook the woman's hand, glad to be called a boy. "Black Mouse."

"Indeed. And you can fit in tight spaces, right?"

Mara looked at Alana up and down. "For your sake, boy", her ironic tone in that word didn't go unnoticed, "I hope you're as good as they say."

"What does it matter, when I know the answer? Have you ever been in space?"

Mara shook her head. "No issues. It'll be quick. I need something retrieved from a spaceship, a lost spaceship that has been orbiting a planet for millennia."

Alana felt queasy. "The Ghost Ship?" That was a legendary, humongous, non-human spaceship orbiting C-2, the nearest planet in their solar system. Search teams had been sent there, and legend said nobody had ever returned. It was also called the Death Ship.

"Why that face? It's just a ship. Like the ones you enter to retrieve little things."

"I've never been in an alien spaceship, madam." Hopefully she was using the correct title.

"Few people have, have they? Since the treaty of mutual ignoring, we've just pretended they don't exist. Contact was broken. Or at least that's the official story. But it's just a ship, girl, a ship with very small passages where few people fit. You're lucky to be tiny, or else I'd need to try with a child."

The woman still assumed Alana was going to say yes. No way she'd agree on a suicide mission, and she didn't care what Selma thought of that. Still, Alana asked, "What's the pay?"

Alana made an effort not to show how excited she was. She currently made just less than a thousand credits for every standard month. Two million credits would be enough for her to live in comfort for the rest of her life, to escape Samitri, to get her mother the surgery to walk again, and to be free. Freedom!

But Alana had to negotiate. "I won't be able to do much with Samitri credits. It's all controlled, you see? I'd rather Universal Credits. Four million." Her voice had been firm, the way she'd learned to negotiate her prices, even if it usually only meant one or two hundred more Samitri credits.

Mara laughed. "I think I like you. Three million Universal Credits."

Alana was still trying to hide her excitement. "Fine. But that's pointless if I don't get out alive."

The woman stared at Alana in a serious expression. "That ship has been studied. I have a diagram of its interior. It has a small passage that you can fit through. Nobody else knows about that passage; they enter through a different entrance, one with high security. That's why they never come back. That said, I'll come with you. You'll go directly to the chamber I need. If you can enter, you can get out, right? Nothing to fear."

Alana had been waiting for so long for an opportunity to break out of her cycle, to leave this planet, to be free. She couldn't say no to it when it presented itself to her like this. Dangerous, sure—but it was everything she'd always dreamed. She extended her hand. "Deal."