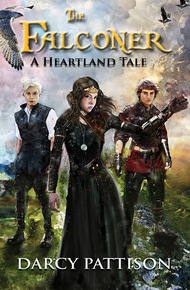 The Falconer by Darcy Pattison

She strode out of the north and into legend.

Britt and her falcon, Tatty Mog, are partners in life, hunting, and growing up together. Together, they will face the challenge of leaving behind all they know and searching for a way to stop the fierce Zendi who have invaded the Heartland.

Her grandfather, Winchal Eldras (the main character of the companion book, THE WAYFINDER) is a Wayfinder, someone who can Find anything: a missing ring, the best melon in the market, or a lost child. He gives Britt a Finding for a missing Bell. The Zendi know that the Finder's Bell holds the key to their victory in the Heartland. Britt mustn't let them know that she can Find it.

But to Find the Bell, she must travel across the Heartland with just Tatty Mog at her side. In the tradition of Tamora Pierce, this fantasy presents a heroine of wit, strength, and savvy. This is the story of a falconer, a courageous girl who strides out of the north country and into legend.

Trotting easily, she headed north for the cliffs that jutted toward the sky. She only needed an egg. The rest would follow.

Pale sunlight reflected off the snow, creating a glittering landscape. Beneath the snow banks, water trickled, the beginnings of a warm spring thaw. This far north, the sun would set just an hour or two after midday. By evening everything would refreeze.

She reveled in the white world. It was her first day out alone since winter had locked them in their cabin four months ago. She adjusted the rope on her shoulder and at her waist; she patted the pouch of goose down—the soft under-feathers of geese that would cushion the egg. Excitement filled her; she was ready.

From overhead, a falcon shrieked. She glanced up and recognized the huge white wings of the gyrfalcon pair that nested on the cliffs. They were hunting.

Exultant, she thought, Today's the day.

Britt picked up her pace and ten minutes later clambered over rough boulders to reach the base of the cliff. The cliff face was broken, with clumps of boulders scattering the ground, rock that had split off because of water freezing and thawing. She saw no paths upward which meant she'd have to climb. Gulping, she bounced on her toes, studying the cliff face and picking out the easiest route. I can do this. Just take it slow and easy, she told herself.

She started up, grabbing a large rock and pulling herself level, before bending a leg to step up to a small ledge. Handhold by handhold, she scrambled upward, her arms and legs burning with the effort. At last, she heaved herself onto the wider ledge. She sat, legs dangling, content to rest for a moment.

To the east, the vast tundra stretched toward the horizon, flat and endless. North lay massive Charon Mountains, including Mount K'Athma, the tallest mountain in the Heartland. To the south and west lay rolling hills, that would eventually give way to the great Pohjan Forest. Surely, she thought, the Heartland can't get any lovelier. Or lonelier. Her home wasn't far, hidden in a valley, protected from the north winds.

Turning, she looped her rope around a boulder and dropped the rope down the cliff. She didn't expect problems, but the rope was there in case she needed a fast escape.

Last year, when she was just ten, her father had forbidden her to search for the gyrfalcon nest. But he had said nothing this year. Britt grinned. Oh, she knew he'd likely say the same things. The gyrfalcons are vicious birds of prey, he'd say. Their claws can pierce and crush a fox's skull. It's too risky.

But Britt wanted to be a falconer, to raise and train a magnificent bird, to have the chance at a deep friendship that would fill the lonely days. And that meant she needed a chick. Her falcon—when she finally got one — would be able to hunt despite the winter snows so there was always stew for their table. After four months of winter, she was sick of the turnip soup that her mother made daily. A rich rabbit stew sounded like a rare treat.

The nesting ledge lay four feet above the main ledge. Britt stood on tiptoe to peer over the jumble of sticks that made the nest. She caught her breath with delight.

Mottled and brownish-gold, three eggs rested on the sticks. Good. She only needed one which left the gyrfalcons with two chicks. It'd take all their time to keep those two fed.

A gyrfalcon screamed a warning.

Britt glanced toward the skies. The gyrfalcons flapped hard, racing toward her, shrieking their anger.

Britt's stomach twisted; they'd spotted her faster than she'd expected. Here on the open ledge, she was vulnerable. Her heart drummed at the risk she was taking. Quickly, she placed her palms on the ledge and heaved herself up. Nothing could stop her from getting her lovely egg.

The gyrfalcons' wings spread at least four feet from wingtip to wingtip. In unison, they snapped their wings closed against their sides and dove.

She grabbed the closest egg and shoved it into the pouch with goose down to protect it. Jerking the cords tight around the egg, Jubilant, Britt leapt from the ledge and darted to the cliff's edge. She found the rope and started slithering down so fast that the rope almost burned her hands even through her thick gloves.

One bird dove at her, his wings beating, and she almost lost her grip on the rope. Then, she was at the rope's end, and she dangled ten feet above the ground. The gyrfalcon came around again, talons snatching at her winter coat. She dropped to the ground and absorbed the fall with a roll. The gyrfalcon spiraled upward.

Afraid that it would dive at her again, Britt darted away from the cliff, staying low, dodging between boulders and then among trees, expecting talons to strike her at any moment. Finally, gasping for breath, she stopped and looked back at the nest.One bird sat on the nest while the other patrolled the air nearby, making short, angry sweeps in front of the cliff.

Britt squatted and breathed deeply, relief flooding through her. Her only regret was losing the rope, but they had plenty of spares.

She scolded herself. Her father was right: stealing a gyrfalcon egg was foolish. She could've been hurt badly.

But then she grinned and pulled the egg from the pouch to study it. It was about the size of a regular chicken egg. She'd been half afraid it would break when she rolled, but the bumpy surface was unbroken. Delighted, she studied it, thrilled with its size and color.

Oval, full of life—the egg was a beginning, a new start, and it whispered a hope of something to fill the days besides her lessons and her chores, the hope for a companion, a friend, to share the long, lonely days. The egg promised so much joy and life.

Elated, she imagined the delight of watching her falcon hatch and grow. There would be many exciting days ahead. She was glad she'd made the effort to get an egg this year.

She'd have to work hard the next few years to properly train and bond with the bird. The prospect filled her with a deep contentment. Her parents and grandfather had to see this egg. For safekeeping and warmth, she pulled the pouch's cords over her head and tucked it beneath her shirt. She rose and trotted toward home.

At the cabin's clearing, though, she slowed. They had visitors. Pack animals—a donkey and two mules—were tied to their front porch. Backpacks lay on the porch. A shiver of delight went down her spine. Visitors. That meant people, good food, and stories. People!

Something prickled at her though. People also meant that it was hard to keep secrets. She made sure her egg was hidden beneath her shirt where strangers wouldn't see it.

Eagerly, Britt pushed open the door and stepped inside, a wave of warmth hitting her. She shoved back the wolf-fur hood and blinked to adjust to the dark interior. Home, she thought is where your happiness lived and there was a lot of happy memories in this cabin.

From the fireplace, a tall figure turned around. He was white-haired, but young, perhaps fifteen or sixteen. His skin was pale, a frosty white. Piercing blue eyes stared at her. An albino.

Her excitement turned to ice: he was a Zendi warrior.