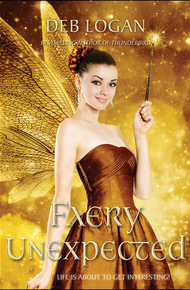 Deb Logan specializes in tales for the young – and the young at heart! Author of the popular Dani Erickson series, Deb loves the unknown, whether it's the lure of space or earthbound mythology. She writes about demon hunters, thunderbirds, and everyday life on a space station for children, teens, and anyone who enjoys young adult fiction. Her work has been published in multiple volumes of Fiction River, as well as in 2017 Young Explorer's Adventure Guide, Feyland Tales, and other popular anthologies. Learn more about her work at https://debloganwrites.com

The most important week of Claire's life has arrived — the first day of high school, followed closely by her uber-important fifteenth birthday — and where are her parents? Sunning in the south of France, that's where! As if dereliction of duty wasn't enough, they left Claire in the care of her more-than-slightly-dotty grandmother, a woman who believes in fairies and dragons. Gag.

What's an aspiring teen diva to do when her grandmother insists she wear a toy dragon perched on her shoulder on the first day of school? Ditch the annoying lizard, that's what. But it seems Gran has unholy powers: the dragon is immovable unless a teacher takes note and orders Claire to remove it. Claire's dream of making a splash in high school didn't include being the butt of a standing joke. Can life get any more devastating?

You bet it can! Just wait until Claire discovers the birthday present that will change her life...forever!

Families are great, but there are times when they stink. I mean, I love my mom and dad, but wouldn't you think they'd at least have asked me if I wanted to spend a month on the French Riviera with them? Honestly! I could've made arrangements to go, even studied while sunning in the south of France. The first few weeks of high school aren't that important. But the parents refused to listen to reason. Instead, they arranged for Gran — Mom's decidedly weird mother who never went anywhere without her even weirder toy dragon — to stay with me while Mom and Dad defected to Europe to laze in the sun. I figured by the time I survived the first week, I'd have earned a vacation of my own.

What a rip. I'd been searching for a solution to my high school dilemma, and they'd handed me the answer and then snatched it away, all in the space of a two-minute conversation. Man! My first day at Jefferson High was racing down on me and I still didn't have a concrete plan for leaving the middle school nerd behind. I didn't need to be the most popular girl at school, but I definitely wanted to improve my social standing.

In middle school I'd been a dork, and Danielle, the cheerleader-from-hell, teased me mercilessly about my good grades, happy family, and that stupid book report on fairies I'd done in seventh grade. Hello, I'd done my Shakespearean research, A Midsummer Night's Dream, anyone? But that didn't matter. She called me 'Fairy Clairey' for the rest of middle school. Even got her friends in on it. Made me sound like a complete idiot.

For a whole, shining minute I'd had my answer — before my parents ripped it away by uninviting me on their little European jaunt, but if I closed my eyes I could still picture the beautiful vision: me swaggering through the front doors of Jefferson High three weeks into the first term; my usually pallid skin crisp from a month of sun and sea; my unruly mop of short, curly black hair fashionably styled in the latest Paris do; my outfit straight off a tres chic fashion runway. Danielle would have a cow, and I'd be the reigning queen of the class. I might even have a chance at getting a boyfriend.

But no. Instead I got stuck with crazy Gran and her bizarre stories of dragons and centaurs and the magical adventures of her childhood. Gag!

So here I sat on a beautiful late-August day at Portland International Airport with my parents, waiting for Gran to show up. I stared out the window, watching her jet unload. I leaned my forehead against the glass and listened to my parents' quiet conversation.

"Relax, Emily," said Dad, a tall square man sporting thick glasses and a warm smile. "She can't get lost. Everyone from the concourse channels past this waiting area. We won't miss her."

I glanced at my parents, but kept my forehead against the cool glass. Mom was dressed in creased gray wool slacks, ice blue blouse and a gray cardigan embroidered with small birds and vining leaves. She smiled and tucked a strand of dark brown hair behind her ear. "I know, but it's hard not to worry. I just can't get over feeling like I should've gone to get her. She's so helpless without Daddy. He did everything for her when he was alive. She never even had to fill the car with gas."

"Yes, he was old-school to the core," Dad agreed. "But I think he underestimated your mother. Don't make the same mistake, Em. Deirdre is tougher than you give her credit for."

A flash of golden light out of the corner of my eye made me glance back at Gran's jet. For a moment, I swear I saw something hovering over the plane. More than simple heat haze rising from the tarmac, something shimmered in the air above the airplane, like a window into another world. I blinked, and it disappeared. But the green-blue after image burned behind my eyelids … a castle in the sky.

Great. Just the thought of Gran's stories and I was already getting all stressed out and weird. Give her a month and my elevator wouldn't go all the way to the top.

I used to love having Gran visit, but that was before I grew up and realized she was a few sandwiches short of a picnic. What little kid wouldn't love a grandmother who told them dragons were real and made them believe they could ride the wind on the back of an awesome, intelligent beast? Every kid wants to believe in magic.

I scootched lower in my seat, found a cooler bit of window for my cheek, and tried to convince myself that it wouldn't be so bad having Gran around for a month. I'd be at school all day during the week. I'd just have to make sure I had plenty of invitations for sleepovers on the weekends. My birthday might pose a problem, though. What if she decided to throw me a party?

Oh. My. Gawd. I could just imagine what my friends would say if Gran started telling dragon stories. I'd have to head her off. Maybe let it slip that my heart's desire would be dinner and a movie…just us girls!

I didn't have time to hatch a better plan because Gran came striding purposefully around the corner. My heart thumped, and I jumped to my feet. She might be weird, but she was family.

"Gran," I shouted above the general din of other sons and daughters, grandkids and friends calling to their loved ones.

"Deirdre," boomed Dad, visibly restraining himself. I knew he itched to grab her carry-on luggage out of her hands, but couldn't do anything until she moved past the security barrier.

And then she sailed through the gate and we hugged and tugged, a mass of flailing arms and clutching fingers, until we managed to bob out of the stream of excited humanity into our own quiet pool of reunion.

"Claire! Look at you," cried Gran, breaking from the jubilant tangle to hold me at arm's length. "You're practically a grown woman.

"You've blossomed, my dear," she said with a wink. "But I'm pleased to see you haven't overblown."

Well! Nice to know my understated cleavage pleased someone.

"You look wonderful, too, Gran," I said with a forced smile. She did. If you liked the psychedelic look of the sixties crossed with demented dandelion. Gran sported a cheese orange rain poncho, lime green rubber boots, short, wiry gray hair that sprang from her head with no discernible style or direction, and Roddy, the ever-present two-foot long toy dragon attached to her shoulder on his Velcro perch. But her eyes sparkled merrily and her smile illuminated the dreary waiting area.

My frosty welcome melted and I hugged her with genuine appreciation. After all, blood is blood. She might be a dingbat, but she was my dingbat, and I loved her.

"We're going to have the best month of your life," she whispered in my ear. "Just you wait and see!"

"Peter, if you'll get my bag," Gran said, taking charge. "Claire, bring Roddy, please, and Emily, tell me all your news!" She disentangled herself from me, dropped the toy dragon in my abruptly empty arms, grabbed Mom by the elbow and headed for baggage claim, her head close to Mom's.

Dad and I exchanged glances, shrugged, and carried out our assigned tasks. I held the toy dragon up to my face and stared into his beady green eyes. "Okay, Roddy," I said, only half teasing. "Here's the deal. You stay out of my way and I won't accidentally knock you into the trash compactor."

Dad laughed, grabbed Gran's rolling duffle in one hand and dropped the other on my shoulder.

"You're going to be fine, Claire. Just fine."