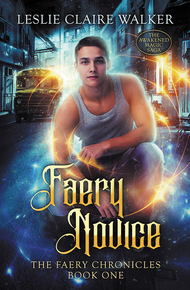 Leslie hails from the concrete and steel canyons and lush bayous of southeast Texas. She now lives in the rain-drenched Pacific Northwest with a cast of spectacular characters, including cats, harps, and fantastic pieces of art that may or may not be doorways to other timelines.

She is the author of the Faery Chronicles and Soul Forge, two complete urban fantasy series set in the same world and filled with found family and kind badasses.

A smart boy in search of a normal life. An enchanted girl with a golden voice. To save his family, he must discover the secrets hidden in a magical underworld.

After his mother's death, Kevin fights to build a new life on his own terms. When he begins to hear others' thoughts, he fears losing his grip on reality. Until he meets a charmed girl who reveals the thriving Faery underground in the shadows of his city.

Kevin's rising magic threatens the fae, and they vow to destroy him unless he gives up his power. But they cross a line when they kidnap the people he loves. With the help of his bewitching friend, Kevin must break in to the underworld. He must embrace his magic before the Faery King steals his mind and his life…

Faery Novice is the first page-turning book in the Faery Chronicles series of young adult urban fantasy novels. If you like fast-paced plots, hidden worlds, and star-crossed romance, you'll love this magical series.

Rude turned onto a dead-end street tight enough to be an alley, red brick warehouses with boarded-up windows growing up three stories on either side. All dark, no sign of life that I could see except for the rusted yellow school bus that rested at the back of the alley. Faint light shone inside the thing's windows and open door.

"Oscar sent us to a school bus?" I asked.

I stepped out of the car, Rude scrambling to catch me. In the shadow of the warehouses, I saw hardly any stars, fewer even than at home. The red light of a passing plane winked overhead. A breeze kicked up, sweeping a crumpled newspaper across the asphalt. My sneakers crunched on broken beer bottles. The temperature dropped the closer I drew to the bus. The cold knifed through my clothes.

Just like a horror movie. Any second now, we'd get our guts handed to us.

Rude jogged past me, stopping before he got to the door and motioning for me to do the same.

"Oscar sent us," he called.

I stepped closer to him. "You sure she's home?"

A wind blew again—this time from inside the bus. The hairs on my arms stood up.

I half-expected him to get struck by lightning or vanish into thin air or get stabbed.

None of that happened.

Rude glanced over his shoulder. "It's all right, Kevin."

He climbed the steps into the bus, and I didn't wait to be told twice to follow. No way was I staying out here by myself.

Walking into the bus felt like stepping into a time warp. The girl who lived there had to be a hippy. Or else hippies had exploded all over the inside of the bus.

The sweet scents of pot and patchouli incense permeated the whole place. Tiny, tinkling wind chimes hung near the windows. Every available ceiling space had been papered with black-light posters, so many I couldn't make out the images on them. Along the edges of the center aisle, candles burned in deep glass jars, their glowing wicks almost drowned in melted wax.

Bicycle handlebars and chains and pedals lay strewn on the ripped vinyl bench seats. Except on every third seat, where pillows and blankets had been gathered into piles to protect unframed oil paintings on stretched canvases. Good paintings.

The longer we stood there, the thicker the air got. And charged. With electricity. The kind that shocked. Or if it got strong enough, the kind that could do some damage. It wasn't enough that the hair on my arms stood up. All the hair on my head did, too.

"She wants a song," he said. "She wants it like an offering, or we have to leave."

Without another word, he launched into an off-key version of Linkin Park's "No More Sorrow."

I'd never heard him sing before, and never wanted to again. The whole thing couldn't end fast enough.

When it did, the quality of the air had changed. I could breathe better. I didn't feel like I might be electrocuted any minute.

And there was a girl at the back of the bus. A girl with gossamer wings.