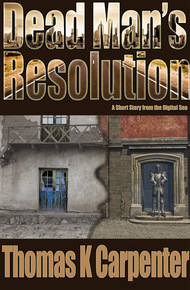 Tibor Case longs to escape high school and move onto his real life, the one he knows will be infinitely better than his current one. His only relief from the drudgery of school comes when he escapes to Old Detroit to play games him and his best friend, William, created for their augmented reality shades.

When Tibor stumbles upon a dead man in a dumpster with a high-tech system and decides he wants to see what's on it, he learns that life outside his small, little world has gotten stranger than the games he plays.

I first encountered Tom’s writing via his short stories, and he’s skilled at packing a lot of punch into few words. This futuristic-set tale is no exception. –Anthea Sharp

Tibor had two more days until high school resumed from spring break, but as sword-mage of the Destaria, he had a score to settle first.

Light from the silver sky filtered around him like a haze while three fat moons calmly hung above. He paused as the massive volcano on the biggest moon, Sarpharian, shot a jet of lava spaceward like a pimple exploding on its red surface. Ignoring the distraction of the beautifully rendered landscape, he spun around, hoping his enemy hadn't snuck upon him while he gazed skyward. As he scanned the surrounding area, Tibor saw the leg sticking out of the old dumpster like a discarded doll, except this one had dried blood covering the tattered boot.

Momentarily forgetting his duel, Tibor trotted to the dumpster. The body, a middle-aged man in an azure jogging suit, lay stiffly over the old rubble. A jagged piece of steel stuck through the hip.

The stench overcame Tibor and he dropped back down, coughing into the crook of his elbow. The air around him exploded in fire, the flames licking over the dumpster. The view screen on his shades flashed red and a skull covering his vision indicated he had died.

A man in red trimmed velvet black robes with a shaggy gray beard ran toward him, pointing and laughing. Tibor had lost the game.

"You low-rez whore, I wasted you. Never saw me coming, I told you today was my day," William said. The wrinkled face split wide in a grin.

"I was distracted…" Tibor started.

William cut in. "Oh, that is so vag if you try to take my win. I told you I was going to beat you today."

"There's a body…" he tried to explain.

William continued to bluster about being cheated, so Tibor waited until his friend had to take a breath, then rushed, "There's a real body in the dumpster."

"God. The smell." William put his hand to his mouth through his digital beard.

"It's not so bad after the first whiff," Tibor said.

William walked a few steps away and retched. "How can you stand so close?"

With a thought, using the neural actuator, Tibor switched off the mod Project Gandaymede, and the world around them changed in a blink. Gone was the silver sky, the three moons, the black robes, and the beard on William. Tibor had chosen simpler clothes, faded brown leggings and a gray tunic with a bastard sword strapped over his back, but those were gone, too. The skull and the flashing red disappeared as well.

Instead two young boys in jeans, t-shirts, and black wrap-around goggles suctioned to their faces, stood on the street. Tibor pulled his shirt over his nose. "If I'm going to be a vet, I'd better learn to get used to bad smells."

He vaulted into the dumpster, one leg over, carefully avoiding the chunks of rusted steel poking from the rubble at indiscriminate angles.

"What are you doing?" William asked. "We should get out of here before someone comes along and blames us." William kept his distance from the dumpster as if the smell created a barrier he couldn't pass.

"I just want to check him out." Tibor found a piece of two-by-four and used it to move the leg out of the way.

"Are you crazy? We're not supposed to be here. Our parents would kill us just for being in Old Detroit. And a body? Forget it. They'd put us on lock down, make us delete Project Gandaymede, and no more skins. I can't go out without my skin on, I've got this huge zit everyone would see. Come on, Ti, get out of there."

William put a hand to the throbbing red spot on his forehead. Tibor was reminded of the moon, Sarpharian, and wondered if William had programmed the volcano unconsciously. The zit disappeared as a digital version of William covered the real one.

"If I take my glasses off, I can still see the zit," he laughed.

The four story building next to the dumpster had brown ivy covering the wall. Cracks ran the length of the building. Tibor thought he could knock the whole thing over with a breath.

"He must have fell from up there." Tibor pointed to the roof. "But why?"

"Total outworlder, I bet. Lost in his fantasy land and didn't know he was walking off the roof," William surmised.

"You know outworlders don't take chances. That's the whole point of being an outworlder. Life is easy because you control everything. It's like Nadia. I heard her family uses a random room generator so every time they go into their living room it looks like a different celebrity's."

Tibor wedged the board under the dead man, leaning in to flip him over. The body broke loose from a piece of a construction rebar making a sickening thump as it flopped.

William moved forward lured by Tibor's words. "His brains ooze out his ears or something?"

"Even weirder. No shades or hip pouch, and there's a wire sticking out of his neck."

"Then he can't be an outworlder. No shades, no ARNet computer, no Digital Sea," William said.

Tibor knelt in the rubble, his left knee crushing the man's arm, but he didn't think he'd mind. He reached out to touch the man's face. It made him uneasy, but if he wanted to be a vet, he'd have to get over his fears. Pulling back the dead man's eyelids revealed a black disc surrounded by white. Instead of shades worn over the eyes, he had them on his cornea.

"William, get in here," Tibor yelled.

Tibor sighed. "Cover your nose, but get in here. I want to show you something."

When William finally got the nerve to get into the dumpster, Tibor showed him the man's eyes. The revelation hid the smell and the fact they were touching a body.

"I'd heard it was possible, but I didn't think anyone would do it. You could never escape the Sea," William said.

"Maybe he's a government agent?" Tibor wondered. "The computer's been sewn into his hip and even his neural actuator is embedded. The computer got damaged when he landed, you can see part of it sticking out of his back."

"He can swim and sleep in the Sea," William said. "What a vag to be wearing it all the time."

"Why not? I only take mine off to sleep," Tibor replied.

William poked the body with his foot. "What if you could modify your dreams using it?"

"What's the point? If you can modify reality, then why bother with your dreams?"

"Just asking." William paused, staring at the body covered in dried blood. He whispered, "I'm ready to go now. This body's starting to creep me out, and it's getting dark."

"I want to take his computer," Tibor said suddenly.

William recoiled from him. "Are you crazy? You'd have to cut into him."

"Come on. I'm bored. We can take it home and get the chip out and find out what this guy was doing. I want to know why he died."

"What if he didn't die? What if he was killed?" William sat on the rubble adjusting the kinetic energy collector on his knee.

"I bet it's total high-rez gear. Maybe you can get an edge for your digitronics class. Impressing Mr. Moraine would mean an A for sure."

Tibor knew what buttons to push with his best friend. William loved to take things apart and put them back together again. Whenever Tibor had taken apart old computers or electronics, he was left with a pile of parts that didn't work.

"Okay. But I'm not cutting anything," William said.

"Help me turn him over."

Once they exposed the black box in the man's back, Tibor pulled out his pocket knife.

He touched the blade to the skin, holding his breath expecting the dead man to jump. But as the blade sunk in and he didn't move, he released his breath. Flaps of skin peeled back revealing a black box smaller than the palm of his hand, smashed on one side with wires severed and bits of electronics leaking out. Tibor found a stained rag nearby and pulled the box from the skin. It made a sickening suction sound as it pulled loose. He used the rag to clean it before he shoved it into his pocket.

They found their electroscooters behind a bush that had grown through the broken concrete.

William spoke up, "Are you sure we should take that computer? I don't think we want anything to tie us to that body. They could check the digital records to find we were in the area. The satellites redigitize everything about once a week. What if they make a pass while we're standing here?" William looked at the sky as if he might be able to see a satellite through the cloud layer. "I don't think this is a good idea."

"The chances of a satellite scanning our area right now is null. And I don't think this guy cares if we take it."

"I care. We're going to graduate soon and I don't want anything to screw up my scholarships," William whispered almost too quiet for Tibor to hear.

"We can't get in that much trouble. The guy's dead, right?"

William kicked a sooty bottle across the pavement. "You don't ever get in trouble because your dad's never home." The bottle ended its spin at Tibor's feet.

"I don't get in any trouble because my Mom's dead," Tibor's voice cracked. He swooped up the bottle and launched it against the wall, the shards of glass scattering like tiny jewels.

A long silence hung between them before William finally spoke, "I'm sorry. Of course, I'll help you."

William attempted to give his friend a reassuring smile, but it died beneath Tibor's blank stare. William left on his electrobike.

A pink corona filtered through the gray haze near the horizon. Tibor wiped a tear from his eye and got on his bike. They'd have to hurry to get home before dark. Tibor thought about his outburst and considered throwing the computer into the bushes, but he didn't and followed the red tail light of William's bike into the dusk.