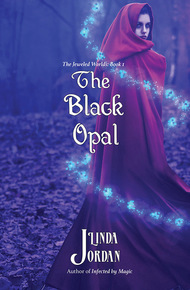 Linda Jordan writes complex characters, visionary worlds, and imaginative fiction. She creates both long and short fiction, serious and silly. She believes in the power of healing and transformation and many of her stories follow those themes.

She lives in the rainy wilds of Washington state with her family, a glaring of cats, a cluster of Koi and an infinite number of slugs and snails.

Her most current series is The Islands of Seattle. Set in the future after our world has been devastated by too many things and magic returns.

The Black Opal by Linda Jordan

With no other choice, Mira must act.

She can't let her own failure at magic block the search for Amanda.

A coming of age fantasy set in a darkly magical world. Buy the book today and begin the journey to the land of the Black Opal. This enchanting series is now complete with Book 3.

Mira smelled the neighbor's lilacs as she walked down the gravel road. Stray clumps of grass and weeds splashed dew into her crocs, and her feet squished around inside the shoes. She looked at the beautiful view of Puget Sound. It would be a gorgeous spring day, rare and sunny.

But it wasn't enough to make Mira forget her miserable life. She'd screwed up again and this time Aunt Rita had sent her to Mom's house. For good.

Mira had been crying for two days, now she just felt empty. Her life held no hope and no future.

She turned back towards the house, pausing to empty a piece of gravel from one shoe.

Then she realized that something felt very wrong. Half a block away, shadows barreled through the mist. A huge hand-shaped cloud appeared out of nowhere, passed over the sun and darkened the row of poplars beside Mom's house. Shivering in the sudden cold and absence of all sound; she smelled the burnt air. It left a bitter taste in her mouth.

She began to run, slipping and sliding in her wet crocs.

The shadows closed in and the creatures took shape as two huge black dogs. They moved like one, legs and breathing synchronized, toward Mira's identical twin, Amanda. And her son, Dylan.

Amanda had her back to the hounds, absorbed in Dylan's play. Oblivious to the threat. Her three year old golden child ran circles around his mom. She sat on the front lawn. The long red hair tied up in a ponytail made her look younger than eighteen. She laughed, ducking the clumps of wet grass which Dylan threw up into the air.

"Amanda! Look out!" screamed Mira. She ran past the massive cedar stump towards them. "Get Dylan in the house!"

Amanda scrambled to her feet and turned towards the dogs. Dylan ran behind her. The hounds leapt at them. Saliva ran from their mouths. Amanda fell backwards on top of Dylan. He wriggled beneath her, trying to get out.

Mira gasped for breath as she ran, helplessly watching Amanda punch the creatures. Hollow thuds echoed as her sister's fists landed. Amanda screamed, but the hounds were relentless in their assault. Their jaws snapped and slavered, easily avoiding her fists and feet.

Mira was there. As she bashed them the sounds of her foot hitting reverberated in the eerie silence.

She looked around for something else to hit them with. There was nothing. When she kicked one in the head, it glared at her with icy-white eyes, then returned to the attack.

To Mira's horror they ripped into Amanda's belly. No blood flowed, but something came loose. A gold object pulsed, reaching tendrils back towards Amanda, as if trying to stay with her. The dogs strained and pulled. The thing, like a golden tropical flower, was severed from Amanda.

Mira felt helpless. Grounding herself, she tried to summon up the Earth's energy. Then attempted to move it through the dogs.

The creatures ignored her, turned and headed back the way they came. She quickly gave up on magic and chased them. She kicked harder and made a grab for the golden object. Off balance, she fell sprawling to the ground. The hound tossed the tendrilled thing to the other, yelped and kept running.

She got up and sped after them halfway across the yard, trying to get close enough to grasp whatever they had taken from Amanda. The creatures ran faster than greyhounds and quickly outdistanced her. She felt torn between chasing them and going back to help Amanda.

She turned and sprinted back to her twin, "Amanda. Amanda are you okay?" she asked, out of breath. Mira knelt, touching her. Barely registering that she saw no wound and her sister's clothes were intact. Amanda's face looked slack, listless.

Mira tried to figure out what to do next. The dogs were almost at the poplars now. She watched in astonishment as a black swan streamed towards them through the mist and dove, taking the object from the dogs.

The pulsing golden thing strained to get back to her twin. Mira could almost hear it screaming. She shuddered. Whatever it was, it belonged to Amanda and somehow Mira needed to get it back to her. The swan flew through the trees swooping up and down under what seemed to be a heavy load, then disappeared into the pocket of fog halfway down the block.

Tears streamed down her face as Mira shook her twin gently. She felt a need to keep Amanda conscious. "Amanda, please stay here." Mira didn't know what the golden thing was, but it was important. She felt worthless. Why hadn't she made different choices, ones that could have stopped the dogs?

Mira rolled Amanda over slightly and helped Dylan wiggle out from under his mom. Then he lay on top of her sobbing, "Mommy, Mommy," clasping his stuffed dinosaur, Freddie. Mira stroked his back.

Amanda looked up at Mira. Her green eyes wept, then turned completely black as if empty. She didn't speak.

Mira felt frozen. She had never seen such powerful magic before. How could she possibly counter it?

The hand-shaped cloud over the sun vanished, like smoke blowing away. Light returned. Sun blazed over the treetops and she felt arid, August heat. The air smelled clean again.

Mira's mouth went dry. She looked around sensing something, not sinister, but as great a force as the evil had been.

She looked up to see a huge, golden eagle above, starting a dive.

She pulled Dylan off Amanda, feeling instinctively it would protect him. He squirmed away from her. The massive eagle dropped down and effortlessly lifted Amanda by her clothes.

Dylan cried out, "No, Mommy come back."

Mira had no idea what to do. Her brain could make no sense out of this. The eagle flew gracefully across the acre, hovered over the massive hollow cedar stump and let go. Amanda fell, disappearing from view.

Dylan ran across the yard, tears streaming down his face. "Mommy."