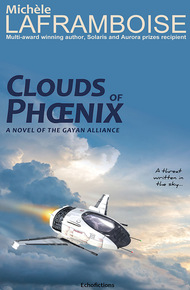 Michèle Laframboise feeds coffee grains to her garden plants, runs long distances and writes full-time. Fascinated by sciences and nature since she could walk, she draws from her scientific background to create worlds filled with humor, invention and wonder. Michèle has published 19 novels and about 45 short-stories in French and English, earning various distinctions in Canada and Europe.

Clouds of Phoenix by Michèle Laframboise

A threat written in the sky. A disabled girl no one takes seriously. A budding colony marked for death.

Blanche, a young girl walking in a cobbled-up exoskeleton, spends hours watching the strange clouds dancing in the Phoenix sky. She soon realizes that their coordinated figures signals a threat. Alas, the adults are too busy to listen to her. Even her sister Lupianne worries more about the oxygen plant's dropping quotas and her similarly failing social life...

Then, as the cloud dances grow more complex and the temperatures rise to never-seen-before levels, the sisters must join forces with a despised artist to save their budding settlement from total eradication.

Clouds of Phoenix is a novel set in the Gayan Alliance universe of multi-award winning author Michèle Laframboise. If you like stories featuring a handicapped heroine and her much put-upon sister going against family and dangers, you'll love this clever planet-opera.

Get Clouds of Phoenix to discover the strangest alien contact ever described in science fiction!

1.The Dreamer in the Ruins

Blanche soon found herself on the highest point of the dead city: the temple. At least, that had been how the archeologists named this abstract-patterned floor, surrounding a high table carved into black polished stone, like the sacrificial altar of the ancient religions. In a single leap, the young pioneer reached the top of the massive block.

A quick look at her oxygen puffer light showed a dark green circle. She still had time left to trot outside the "bubble" of breathable air that surrounded the town. Phœnix might be ranked as an "open" world, but its oxygen mass counted only for one percent of the atmosphere, not enough to breathe. The planet's rating, O-, reflected the scope of the terraforming effort required.

Phoenix had a lesser rate than the "P" planets, soft-climate paradises where any patch of land was in hot demand. However, living on Phœnix was more enjoyable than squeezing families under the pressurized domes of airless worlds or in the bubbles-like cities hovering on gaseous giants.

Calypso, a G4 rated star, solitary and inconspicuous, lingered over the plateau, her light veiled in a milky halo. This halo was due to a thick dust layer hovering in high atmosphere. Those particles, diffusing the green wavelength, generated the sky color.

Blanche crossed her long legs, a tricky task, considering the intricate framework of metal, pumps and pistons enclosing them. Straps rose to her shoulders and encircled her waist to keep her inside the apparatus.

She used her basin and torso to direct the crude robo-servers inserted in the mechanical joints of the frame. She had been clumsy when her father had fitted her with the contraption, but her moves had soon become as natural to her as brushing her hair.

Those mechanical "overalls" enabled Blanche to run, fast. Only an off-road vehicle at full speed could catch up with her… if she let it.

A playful wind lifted her long hair, trying in vain to steal them. Blanche took out a nutrient bar and nibbled at the sweet chocolate and wheat savor.

This was her own precious moment of solitude.

Her gaze traveled over the low walls, the remains of a city older than humanity was. Here and there, spikes wearing red, orange and sky green ribbons warned the rare walkers of the presence of treacherous hidden wells and other dangers.

The dead city had no name. The crews that had mapped, sampled, analyzed and recorded it for the posterity had long since departed towards more exciting challenges. No scripts graced the arches and the murals.

The best translators had sweated in vain over the abstract patterns covering the floors. No tool, no tombs helped reconstitute the life of its inhabitants. No clue hinted to the nature of the cataclysm that had annihilated the city.

Eons ago, three planets were circling Calypso. The two sisters of Phœnix had been reduced into loose asteroid belts that the courier shuttles avoided. What raging war had destroyed them?

Because the adults considered her too young, they never mentioned in front of Blanche the ongoing war that the Gayan Alliance was waging against a rival race, the mysterious Gardeners. But she had listened in some conversations.

Blanche paused, imagining the screech of a burning cruiser tracing a fiery path across the sky, or the necklace of red explosions on the ground following a pass by a fast-flying bomber. But, except for the breeze whispering between two rocks, the only sound she heard was the slow gurgle of the Ubu River, flowing below her position.

In front of her, the valley broadened as to offer the dead city to the plains. The river traced a series of meanders where sand and stones snatched from the landscape accumulated. Then, the Ubu split into a dozen shimmering streams snaking over the delta before embracing the ocean.

Blanche crumbled the wrapping of the bar in her hand and popped it in her mouth. The wrapping melted in her saliva, liberating a sweet marshmallow taste. She chased it down with a few gulps of treated water.

She lay on the smooth black surface to look at the clouds, the wide keyboard bracelet around her left forearm striking the stone with a light dink.

Three pale cirrus clouds drifted, strands of hair frayed by the cold high-altitude air currents. She knew that over the layer of atmosphere, a more glacial void stretched, an infinite blackness where Phoenix and Calypso danced like tiny dust grains.

Dizziness fell over her. The young girl imagined felt that, any time now, her body would loosen itself from the rock and fall in this endlessly green void, ripping the frail threads of cloud.

Then, the dancers appeared.

They came from the East, from the highland rising over the valley.

Their forms reminded her of spinning tops enclosed in a disk of ice crystals. Their rotation generated a long tail spiraling down, burdened by the weight of agglomerated crystals, as if the clouds tried to touch the land.

An impossible errand, since the dancers hovered too high in the atmosphere, where atoms got scarce.

Now, they were eight, nine, ten, eleven… She greeted them with a smile.

"Speaking again to the clouds, Blanche?"

Blanche's eyes blinked open. Six polymerized steel legs had made a cage around her, holding up a squat body.

She must have dozed off while watching the dancers. Not a serious problem: in case of prolonged sleep, her oxygen puffer would have warned her in time to return to the Bubble.

The metal spider stepped aside. With a hiss of hydraulic joints, the slim legs folded down, lowering the abdominal seat to the ground.

His hand on the command lever, a man clad in a brown overall looked at her from mischievous eyes. Blanche answered with a tongue-in-cheek smile.

Sabian was the only adult not all worked up and ranting all day about schedules and quotas. A rare thing on a burgeoning colony, he moved around on his own runner, a freedom that many other coveted.

"I saw you from my place," he said, using the intrafamilial form of address that Blanche appreciated. "I thought that here would be a good place to work, today."

He had come here to paint, of course.

A gust of wind pushed gray strands from his brow. Sabian was also the only man on Phœnix over fifty standard years old. Raising his hand over his brow, he looked up, wrinkles fanning from the corners of his eyes.

He jumped from the seat and landed on his boots, a lithe move that many younger men would envy.

Sabian cast a triangular cushion to the ground. Three legs popped up, inserting themselves between the tiles of the temple floor. The man sat on the mechanical stool, grateful for a little stability after being shaken by his spider's gait. Following his habits, he would stay here without moving at least half an hour, before pacing the ruins for inspiration. Blanche left him, eager to roam the ruins on her own.

There was a lot to discover, she was certain of it.

She took care not to fall in the wells or to trip over a raised stone. While descending the unequal slope from the temple, she could guess at the geometry of the house foundations. Metal beams had held the stone houses together at a point in time, but whatever had killed the city had melted the supports, leaving the low foundations in place. Most of those were now covered by scattered bricks, but the teams of archeologists had cleaned out a few of the habitations, hoping to find some usable alien tech, or some jewels.

They hadn't found anything besides mineral artifacts: the black table, some marked slabs, signs on the walls. They did not find any evidence of doors or windows. Blanche pictured in her mind the unknown beings hopping over the base of their wall to land on the roof, and descend to their living area.

When the young girl returned from her explorations, her friend was installed before the graceful curve of a triple portal. His veined hands moved over a wide memory pad, fluttering like bird wings. He was fashioning a series of majestic clouds rearing high over the portal.

He used a fan brush, its magnetic ends reacting with the cells of the pad to recreate the woolly spirals of the dancers. Blanche bent over his shoulder to get a better view, fascinated by such a sophisticated tool. One of her long strands swept the pad's surface, sprouting a lace of dark patches.

The young girl backed up in alarm, her face flushing red. But the artist erased her mishap with his thumb.

"Do you want to draw?" he asked, smiling.

Blanche pointed an inquiring finger on his sketch.

"Oh! Don't worry; this one can wait in memory."

In a blink, the pad's surface went empty. Elated, Blanche put her fingers on the screen and began to draw a cloud.

The seemingly simple task was demanding: her hands trembled, spreading ill-formed splashes instead of vaporous filaments. A few minutes later, she stopped to consider her work of art, her lips jutting in an eloquent sulk.

"No, it's very good," Sabian said, his tone encouraging. "You did not choose an easy subject."

Before Blanche could answer, an angry voice tore the calmness of the ruins.

Camped on her long legs, arms crossed over her chest, Lupianne Gaillard stared at them. The wind had disheveled her thin short hair. Blanche's older sister hid her exhaustion behind pinched lips. Her humor sweater was glowing a ferocious scarlet. Her left hand held a rigid map plate.

A solitary green dot was blinking on it.