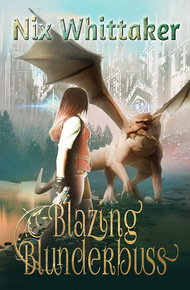 Nix Whittaker is an English teacher in the heart of the North Island of New Zealand. She lives with her cats and her dog in the shadow of an active volcano where she writes in her spare time.

Nix started as a reader to help improve her spelling as she is dyslexicbut was hooked by the marvellous worlds of Mercedes Lackey and Terry Pratchett. As time passed and she read out the library, she was forced to write to feed her ferocious need to read. Now her books are influenced by Patricia Briggs and Anne Bishop as she is still very much a reader and so writes books she would like to read herself.

Gideon is the top of the food chain but when he is kidnapped he is trapped in his human form until Hara rescues him. Hara isn't looking for trouble but she seems to attract it when they accidentally steal a pirate airship and are thrust into a conspiracy that could bring war to the Empire.

Hara is running from her past when she stumbles across Gideon, an academic in need of rescuing. Only he is a dragon and he wants to collect her into his treasure. She isn't about to let anyone tell her what to do ever again.

Light cracked into the wooden box Gideon was trapped in. He didn't find himself locked into a wooden box very often, so he watched the crack widen with curiosity. There was a loud snap and the lid of the box was removed completely.

Gideon looked up at the men who stared down at him. He didn't jump up and try to escape, as success wasn't likely with the bands around his wrists. The bands seemed innocuous, but they made sure he hadn't escaped from the moment he woke up in the small, coffin-like box. He had already tried to shift his form, but when he couldn't, he had studied his very small surroundings. That was when he had discovered the bands around his wrists. He hadn't been able to see them in the dark, but he had guessed what they were when he couldn't shift his shape.

Whoever had organised to kidnap him had known well their task. The bands were made out of the elements which had first drawn him to this world, and it made things a little sticky when it came to his ability to change into his true form.

He didn't think he was in his home city anymore either. He had been knocked out and he had woken up in this box, and that had been hours before, or possibly even days.

A man growled and all the men looking down at Gideon stepped away. Gideon eased into a sitting position and studied the room around him. The seedy room had no windows. It looked like a rundown tavern room set aside for private guests, complete with peeling wallpaper which had once been lovely, but was now faded and stained. The furniture was sparse and also faded. The flower pattern on the fabric now looked like children's finger painting.

He had been placed in the middle of the room. The box was uncomfortably shaped like a coffin. The room itself was mostly filled with men. About half a dozen of them glared at Gideon, though he wasn't sure what he had done to deserve the dark looks. The men all wore tall black boots wrapped with leather straps. They had an abundance of fur on the rest of their clothes. They sure did look warm, and Gideon wished he had some of their fur, as it was cold in the room.

Gideon grinned and said, "Is it possible for one of you to turn up the heat just a tad? My bones are quite brittle at my age." Everyone ignored his comment as Gideon looked around to find which one of the men was in charge.

The man who had growled at the others earlier said, "Are you Gideon, the mathematician?"

Gideon studied the men. He wasn't used to being referred to as merely a mathematician. Usually there was an epithet in front of it, like "annoying" or "moron". He rather liked "moron mathematician" as it was an alliteration and there was some symmetry to the insult. He had worked at the university in the capital for the last four decades as a professor, and even they did not call him merely a mathematician.

Gideon turned to look at the man before he said, "I'm a mathematician, but I'm not sure I'm the one you want. I know this mathematician who looks just like me, we have the same tailor. I'm sure he would be happy to help you out, but I'm afraid my plants are going to miss me. I'm sure they're already wilting."

The man shrugged. Older than most of the others in the room and had a white peppered beard. His fur hat covered oily hair. He stepped forward. "I am Nikolai. And if you are a mathematician, then you are the one we want. The men who procured you for us would not have made a mistake lightly."

Gideon had been studying the other men in the room and the room itself when Nikolai's last sentence grabbed his attention. "Someone procured me for you?"

Nikolai twitched his nose with his thumb and eventually he said, "Yes. You are now in Rosha. You are not in the Empire anymore, Professor." Nikolai's strong Roshian accent made it difficult to understand all his words but Gideon got the gist of it. He was very far away from friends and therefore trapped.

Gideon flashed a grin and said, "Excellent, I needed a vacation anyway. Does anyone have a drink? Preferably one with one of those pink umbrellas. No?" When they didn't answer him he demonstrated what he meant with a few gestures, but the men continued to stare at him, so he shrugged his shoulders in disappointed defeat. It didn't seem these men had much in the way of a funny bone.

Gideon studied the room and the other men carefully as he took in what they had said. Something was off and he couldn't quite put his finger on it. It was the mathematician comment. The reason why people never just called him a mathematician was because they could never get over what else he was.

This made Gideon turn to study Nikolai. Gideon raised an eyebrow as he realised Nikolai might not know he was a dragon.