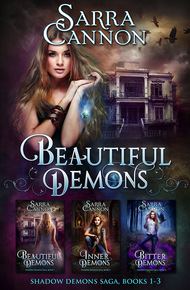 Sarra Cannon writes magical, contemporary fantasy novels with both teen and college-aged characters (and lots of twists you'll never see coming). Her novels often stem from her own experiences growing up in the small town of Hawkinsville, Georgia, where she learned that being popular always comes at a price and relationships are rarely as simple as they seem..

She is a devoted (#obsessed) fan of Hello Kitty and has an extensive collection that decorates her desk as she writes. She currently lives in South Carolina with her amazingly supportive husband, her adorable red-headed son, and the most precious baby girl ever!

Harper Madison isn't like other girls. She has extraordinary powers, but her inability to control them has gotten her kicked from so many foster homes she's lost count. Shadowford Home for Girls is her last chance, and she hopes Peachville High will be the fresh start she needs.

At first, life appears to be looking up for Harper. She's making new friends and is strangely drawn to the boy next door. But when evidence ties her to the gruesome murder of a Demons cheerleader, Harper discovers this small town has a big secret.

Read Books 1-3 of The Shadow Demons Saga with over a quarter of a million copies sold.

1. This is Your Last Chance

Six foster homes in one year had to be some kind of record. I ran my sapphire pendant along the silver chain around my neck and looked out at the pine trees zooming past. Where would they send me next?

"I don't know what got into you, Harper," Mrs. Meeks said. Her hair shot out every which way, and she wasn't wearing any makeup. The call to come pick me up probably came in after she'd gone to bed for the night. "I can't keep doing this."

I eyed her. Was she passing me off to another case worker? Mrs. Meeks had been there with me from the beginning. Since the fire. I didn't want her to abandon me now.

"It was an accident," I said. I sat up straight in my seat and studied her tired face. I needed her to believe me.

"An accident?" Her voice took on the shrill tone I had come to expect from her. "Mrs. Sanders said you threw a lamp at her. How could that have been an accident, Harper?"

"I didn't exactly throw it," I said. I bit my lip. How could I possibly explain it to Mrs. Meeks? Or anyone for that matter? One second I was arguing with Mrs. Sanders about a party she wouldn't let me go to and the next, well, everything in the room that wasn't nailed down was floating three inches in the air. "It just sort of—"

"Sort of what? Threw itself?" Her face contorted into an angry grimace. She didn't believe me.

I sank into the leather seat and sighed. No one ever believed me. Instead, they called me names like 'witch' and 'freak'.

"Harper," she said, her voice softening. "I've always tried to place you in the very best foster homes in the city. Places where I thought they would try to understand your..."

She searched for the word.

"Your unique issues. But this is the sixth foster home you've been kicked out of this year. And with your history." She glanced over at me and sighed heavily. "It's getting harder and harder to place you."

I leaned my forehead against the window and felt the cool glass against my skin. After everything I'd done, it made sense that no one wanted me. I closed my eyes and remembered the beautiful porcelain skin of my adopted mother, Jill. I never meant to hurt anyone, especially not her.

"At this point, there's no other choice," Mrs. Meeks said.

I opened my eyes and looked over at her. In the light from the dashboard, she looked old. Worried. Angry. A wave of nausea rolled over me.

"No other choice than what?"

She looked over and patted my leg with her hand. Not a good sign.

"I'm taking you to a place called Shadowford Home," she said. "It's in a town south of here. Peachville. And the woman who runs it is well known for taking in girls who are struggling in the regular system. Girls like you."

"Peachville is a small community. Very different from Atlanta. I think it'll be a good place for you. Atlanta is just too big. Too full of opportunities to get in trouble or get mixed up with the wrong crowd." She pulled the car off the interstate. From the looks of it, we were in the middle of nowhere. "But I have to be completely honest with you, Harper. If you can't make it work at Shadowford, I'll have no choice but to take you to juvenile detention until you turn eighteen."

A home for troubled girls was bad enough. I certainly didn't belong in juvie. I'd known people who had gone to the one in Atlanta. It was practically like prison for teens. Constant supervision. No freedom. Strict rules. My entire body tensed just thinking about it.

"What did you expect?" she said. "Since you were eight years old, I've placed you in foster home after foster home, and you've been nothing but trouble for these families. Throwing lamps. Breaking windows. Fires."

"None of those things were my fault," I said.

Anger and frustration stirred deep in my stomach. How dare she bring up the fire. I had only been eight when that happened, and it wasn't my fault. It wasn't!

Change rattled in the cup holder that sat between us in the car. Quickly, I slammed my hand down over the top of it.

Mrs. Meeks continued on, thankfully not noticing the rattling noise.

"It's time you learned to take responsibility for your actions," she said. "Make things work at Shadowford or you'll go to juvenile detention for the next two years. I'm sorry, but this is your last chance, Harper."