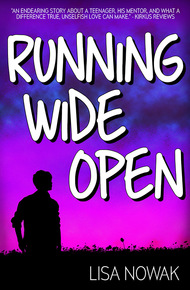 In addition to being a YA author, Lisa Nowak is a retired amateur stock car racer, an accomplished cat whisperer, and a professional smartass. She writes coming-of-age books about kids in hard luck situations who learn to appreciate their own value after finding mentors who love them for who they are. She enjoys dark chocolate and stout beer and constantly works toward employing wei wu wei in her life, all the while realizing that the struggle itself is an oxymoron.

Lisa has no spare time, but if she did she'd use it to tend to her expansive perennial garden, watch medical dramas, take long walks after dark, and teach her cats to play poker. For those of you who might be wondering, she is not, and has never been, a diaper-wearing astronaut. She lives in Milwaukie, Oregon, with her husband, several feline companions, and two giant sequoias.

Cody Everett has a temper as hot as the inside of a combustion chamber, and it's landed him at his uncle's trailer, a last-chance home before military school. But how can he take the guy seriously when he calls himself Race, eats Twinkies for breakfast, and pals around with rednecks who drive in circles every Saturday night?

What Cody doesn't expect is for the arrangement to work. Or for Race to become the friend and mentor he's been looking for all his life. But just as Cody begins to settle in and get a handle on his supercharged temper, a crisis sends his life spinning out of control. Everything he's come to care about is threatened, and he has to choose between falling back on his old, familiar anger or stepping up to prove his loyalty to the only person he's ever dared to trust.

If you're a fan of true-to-life books about kids with real problems, you'll love this humorous and heartwarming story of second chances. Perfect for fans of Rainbow Rowell, Laurie Halse Anderson, and John Green.

The hiss of a paint can sounded like a roar, even over the rumble of traffic on Sunset Boulevard. Tim's drunk-assed laugh snagged my attention. His fingers shook as he used a can of Krylon royal blue to put the finishing touches on an anatomically correct and obviously proud elephant.

"Dude," I said, "his shlong is longer than his trunk."

"Why do you think he's smiling?" Tim busted into another giggle fit, doubling over and clutching his gut.

"C'mon, Cody, you're supposed to be drawing," prodded Mike. "That's not a picture." He was kind of an ass, but it's hard to blow off a guy you've hung out with since third grade.

"Pardon me for being able to communicate with words."

"Is that a giraffe?" Tim said. He was sprawled on the concrete now, staring up at Mike's neon pink animal as it brayed a string of four-letter words across the zoo wall.

Mike planted the toe of his Adidas in Tim's ribs, and Tim tried to nail him in the balls with his rattle can. Then they were both rolling on the sidewalk, thrashing each other.

Why couldn't they shut the hell up? Beer buzzed through my skull, making everything go sideways. The words spilling out of my spray can had a crazy tilt to them.

Whooooop! A siren shrieked. I jerked back and dropped my paint.

"Cops!" Mike was up in a second, bolting down the sidewalk for the woods. Tim wasn't so fast. He'd messed up his knee last fall when he totaled his stepdad's Jeep in the Terwilliger Curves.

"C'mon," I said, grabbing his arm. Red and blue lights flashed around us as I dragged him down the sidewalk—no easy feat, considering he had five inches and fifty pounds on me.

The siren got louder. I risked a peek over my shoulder. They were close, but if I ditched Tim I could make it.

He stumbled, wrenching my arm.

Behind us, the car screeched to a stop. Doors slammed, and footsteps pounded the asphalt.

We reached the end of the zoo wall, but I knew we couldn't make it through the trees in the dark and stay ahead of the cops.

I remembered the last time—how his face had looked when his stepdad got done with him.

"Then get the hell out of here," I said, shoving him into the bushes.

As he disappeared I turned to face the cops.

"Good evening, officers!" I called. "I don't suppose you'd be willing to discuss this like gentlemen over a dozen donuts?"