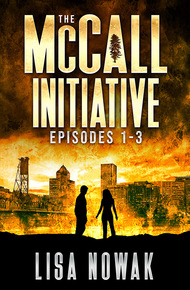 In addition to being a YA author, Lisa Nowak is a retired amateur stock car racer, an accomplished cat whisperer, and a professional smartass. She writes coming-of-age books about kids in hard luck situations who learn to appreciate their own value after finding mentors who love them for who they are. She enjoys dark chocolate and stout beer and constantly works toward employing wei wu wei in her life, all the while realizing that the struggle itself is an oxymoron.

Lisa has no spare time, but if she did she'd use it to tend to her expansive perennial garden, watch medical dramas, take long walks after dark, and teach her cats to play poker. For those of you who might be wondering, she is not, and has never been, a diaper-wearing astronaut. She lives in Milwaukie, Oregon, with her husband, several feline companions, and two giant sequoias.

Whip-smart and laser-focused, Piper's never had a shred of doubt about her talent for medicine. She won't let anything stop her from becoming a doctor. Not the kids who've written her off as a nerdy know-it-all, not the death of her beloved father, and certainly not the secession that transformed her Pacific Northwest home into the nation of Cascadia.

But when her family disappears and she's branded a criminal, Piper's future is flatlined in a heartbeat. Driven into hiding, she learns that wealthy American climate refugees have been buying their way across Cascadia's closed border. Even more sinister, someone is deporting the nation's poor to make room for them.

If Piper is ever to see her family again, she'll have to rally every scrap of her battered grit to decipher who's behind the disappearances. But those responsible will stop at nothing to protect their secrets, and Piper's only hope may be the very boy whose family displaced her own.

If you're a fan of edge-of-your-seat dystopian thrillers with a twist of romance, you'll love Lisa Nowak's glimpse at a future that's all too plausible. Great for fans of The Hunger Games, Divergent, and Legend.

My little brother Nick's stories are so far-fetched, there's no way anyone could believe them, but there's something so compelling about the way he tells them, you just can't help wondering.

"You know those rumors about how people are disappearing?" he asks, his black hair hanging in eyes that spark with excitement. "Well, I know what's happening to them."

And I'm sure he's going to tell me all about it.

"The crimps—that's what they call the guys who do the shanghaiing—they're like dogcatchers," Nick says, not disappointing. "They round up poor people and put them on big trucks, then they take them to this compound in eastern Oregon. It's really spooky, with machine guns everywhere, and vicious dogs that'll rip your arm right off your body. Everybody stays away because they think it's a high-security prison. They say the U.S. government paid off President Cooper to put it in Cascadia so Americans wouldn't have to deal with all those criminals. But really? It's owned by a drug company. They use the people for drug testing. And sometimes they do other kinds of weird experiments, like seeing if they can transplant brains and stuff."

My nine-year-old brother sits on the closed toilet lid, his mouth going a mile a minute as I get ready for my shift at OHSU.

"Don't you think that's a little over the top?" I touch up my eye shadow, keeping it discreet, the way it should be when you're in the medical field. Some of the girls in the Junior Student Assistant Program plaster it on like they work in a strip club. Combined with the skintight jeans they wear, it's enough to make the old guys in the cardiac unit go into v-fib.

"The disappearances aren't real," I add. "It's an urban legend."

"Oh, there's an endorsement." Much as I love my grandpa, I don't believe half of what comes out of his mouth. He thinks the climate crisis was engineered by big box stores in the early 21st century so they could sell more air conditioners. He's got a stash of cash under the floorboards in his room, along with a collection of hand-written journals, because he's sure an electromagnetic pulse is going to wipe out all the computers any day now.

"If the disappearances aren't real, how come there aren't any homeless people anymore?" Nick asks, tossing his shaggy hair out of his face.

I lean in toward the mirror, sweeping mascara over the lashes of my left eye. "Maybe because the mayor didn't want the capital of Cascadia to look like a giant armpit?"

"Right," Nick says, giving me an eye roll full of pre-pubescent drama. "That's what all you naysayers think."

Naysayers. Now there's a word straight off Grandpa's lips. I'm going to have to talk to Mom about how he's corrupting her only son. Not that there's much she can do about it. Grandpa's been living with us since the accident, and with Mom wrangling two jobs, she counts on him to watch Nick when I'm at work or my volunteer position at the hospital.

"If the disappearances were real, there would be documented accounts instead of just rumors, Nick. You should type up all that fiction and put it on Amazon. I hear there's a high demand for conspiracy stories these days." I drop my makeup into a drawer and push it shut. "Now get lost so I can use that toilet for its intended purpose."