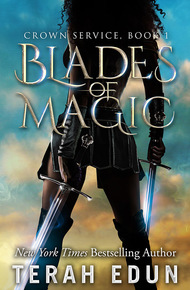 Game of Thrones meets Wonder Woman in this fantasy for fans of Sarah J. Maas! As an unstoppable war breaks out, Sara Fairchild enlists in the emperor's army. But secrets on both sides of the battle — and an unexpected romance — will make her question everything…

Sara Fairchild stared with hard eyes at the three men and two women who surrounded her. They had cornered her in an alley. But only because she wanted them to. She was having a bad day, might as well end it right. Feet planted firmly in the dry dirt, she called out to the group arrayed in a semi-circle around her, "Nice day for a fight, isn't it?"

The woman to her right wore a raggedy scarf around her hair and her ears were covered in at least five earrings per lobe. She glared and said, "You think you're funny, girl?"

Sara watched as the woman spit into the dirt before her in disgust.

"Your da was a disgrace," the woman continued. "You're just like him. A coward."

"And a cheat!" said the man directly in front of her. He nervously fingered a blade in his hands. It was a poorly crafted one. That Sara could tell from five feet away. She stood in front of him with her back up against the wall. She wasn't carrying her sword, but she did have one fine long knife at her waist, a dagger on her thigh, and a baton she'd lifted from a city patrolman in her right hand.

"Is that so?" Sara said, directing her voice at the man in front of her, "And what, pray tell, did I cheat you of, Simon Codfield?"

Her tone was level. Even surprised. He shifted warily. He was nervous even with four of his friends to back him up. When the people standing with him began to look at him oddly, he stiffened his back. Simon licked his lips and said, "Cards. I know you had an extra ace in your belt. Admit it now and we'll only beat you two ways until Sunday."

She tilted her head. "And if I admit it later?" Even he couldn't miss the derision in her voice.

"We're trying to go easy on you," said Simon Codfield, his voice dipping into desperation. He might be a liar as well as a thief, but he was no fool. Sara knew the only reason he and his crew had followed her into this alley was because if he didn't accuse her, he would have to take the fall for losing over forty shillings in a card game that had only started on a bet of five. She knew and he knew that he didn't have forty shillings to give. That was one month's pay for a dockworker, never mind a ne'er-do-well like Simon who hadn't worked an honest job a day in his life.

"Tell you what. Why don't you drop those trousers of yours? Then we'll call it even," said the thief lord in charge of the west district of Sandrin. She turned to face the man who had spoken. He rubbed a hand over his two-day-old beard with a grin.

Sara brought up the long knife in her left hand. "Why don't you drop yours, Severin, so that I can cut off your balls for you?"

Anger flashed in the thief lord's eyes. Anger and passion. Sara smiled. She wasn't joking. If she got close enough to him, she'd make him a eunuch without batting an eye. Simon Codfield gulped and took a step back. He knew she wasn't playing around.