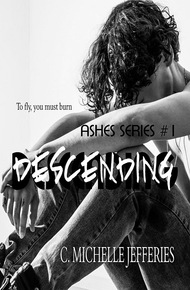 About The Author: C. Michelle Jefferies is a writer who believes that the way to examine our souls is to explore the deep and dark as well as the shallow. To manipulate words in a way that makes a person think and maybe even second guess. Her worlds include suspense, urban fantasy, and an occasional twist of steampunk. When she is not writing, she can be found on the yoga mat, hand binding journals, dyeing cloth, and serving ginger tea. The author and creator divides her time between stories, projects, and mothering two of her seven children on the wild and windy plains of Wyoming.

Author awards: C. Michelle Jefferies placed third in the Storymakers First Chapter Contest, and first place in the Storymakers Song Writing Contest and a publishing contract for her book Enchanted Etiquette, She was a nominee for Writer of the year twice for League of Utah Writers.

All he wants is to fly.

Ashby Standing has it all planned out. Prove his ability to captain a starship in the simulator. Then enter the Star Captain Academy a year early skipping another hellish year of being bullied at school.  When a new street drug proves fatal, taking the life of his grandson Nicolai. Ashby's father Noble has no choice but to step back into his role as an agent for Trinity. In spite of his age and his other duties. Including coordinating a twenty year celebration for the colonization of Caledonia.  After losing her daughter Arial, Ashby's mother Lyris is hyper focused on making sure all of her children are safe and protected. At all costs, even if it skirts what is legal or moral.  Everything converges into a complicated mess as moral obligations, desires, and ego's battle for dominance and for some, descending into the depths of dark is the option seems the best choice.

Someone slammed hard into Ashby Standing's shoulder, forcing his chest into the cold metal of his locker as his cheek smashed into the chevron shaped vents at the top.

"Nice balance, four eyes, maybe you should get your ears checked as well," Ashby's personal bully, Mitchell, said. Laughter erupted from the students within hearing range. Ashby adjusted his glasses, more annoyed with their constant presence than the other student's antics. The bully continued down the hall toward the science labs.

"What a freak," another student whispered as they passed.

Ashby pushed himself away from the door and brushed his fingertip over the sensor to open his locker, then proceeded to place his books on the shelf and exchange his morning class notebooks for the afternoon ones. He was glad that Mitchell had moved on instead of making a bigger deal out of something.

"Ash!" Doran's voice echoed off the metal. Ashby cringed at the nickname. He hated the burned and fire jokes that often came with it. Still, his eyebrow raised as his triplet brother, Doran, bolted down the hall toward him, followed by a few people in the far distance. Doran almost never called him Ash. Unless it was important.

"Ash!" Doran pulled some object from his satchel.

Ashby sighed. Doran never learned. It seemed Ashby was forever doomed to be dragged into all sorts of problems by his brother.

"Oh no, absolutely not," Ashby countered. "Dad said I didn't have to help you."

Doran panted as he shoved a black ball into Ashby's hands. "Remember when I said that I thought the coaches were altering the dantu puck weight?"

"This is the proof." Doran met Ashby's gaze with a certain pleading. "Please. Ash. I need your help."

"Hide it. Put it in your pack, no one is ever going to suspect you." Doran begged.

Ashby put the ball on the shelf in his locker behind the large physics workbook, then set his English book on the top to hide it from sight.

"Mr. Doran Standing, what do you think you're doing?"

Doran looked over his shoulder. "Shit." And he ran past Ashby and around the corner.

"Language, big brother," Ashby whispered as he slung his pack on his shoulder.

"Wait, hold on," the principal said as he slowed to a stop next to Ashby. One of the other teachers continued to follow his brother.

Ashby turned and raised an eyebrow. "Me?" He looked over his shoulder. Doran was gone from sight.

"We need to search your locker," Mr. Davis said.

"Why?" Ashby shut his locker door and looked at the principal, folding his arms. The man was totally annoying, completely ignoring anything that happened to Ashby unless he suspected that Ashby was causing trouble. "According to the school's bylaws, my locker is my personal property as long as I am using it and school is in session."

"We have reason to suspect that you have received contraband from your brother, Doran."

"Contraband?" Ashby actually laughed. "Um, no. Not without a warrant and my father or our lawyer present."

"Grab him," the principal said and Ashby was yanked backward his arms pulled behind him.

"You can't do this. I've done nothing wrong, and you have no proof," Ashby shouted. "Get off me!"

"Open his locker," The principal said to his assistant. He nodded, turned to the locker and produced a master key card. "Search it."

"This is a violation of my rights. I am assured the security of my possessions and information. It's in the Caledonian planetary charter." Ashby growled.

His locker door was pulled open. His pack ripped from his shoulder and hit the floor, where one of the coaches bent over and started to search it. Ashby cringed, his tablet was in there. They were going to break it for sure.

Ashby? Are you okay? His triplet Eiden's voice echoed in his head. While Eiden being deaf had nothing to do with their ability to speak into each other's minds, it certainly made it easier to communicate. Your heart just about jumped out of your chest.

I'm fine, little sis, he answered. She was way too sensitive for her own good sometimes.

You're not at lunch.

I had to finish something for physics, he lied, the dull ache beginning in his chest. If he told her the truth she would for sure go to their dad and then who knows what havoc would ensue. He was enough of an outcast without his father flinching at everything that happened to him.

I'm good, Eiden. Is Doran there?

Good. I'll talk to you after school.

With the exception of their last name, no one would guess that the two boys were twins. Ashby's dark hair was just long enough to slightly curl on his neck and around his ears. His ice blue eyes just like his older brother Eli's. Ashby stood at least four inches taller than Doran but was thinner. Doran's shoulders showed his more athletic build, and he wore his shoulder-length blond hair pulled back in a ponytail, his eyes a bright emerald green. Eiden was pale everything, pale blonde hair with a touch of her mother's red, pale blue eyes, and milky skin.

His jacket was tossed to the floor and then his stack of class notebooks, and his lunch box. Thank the stars he had left his guitar at home today. The antique Fender from his father's Earth days would not survive such treatment. His English book hit the floor open, the spine cracking as the principal stepped on it to get a better look. Ashby was sure he'd have to pay for the damage at the end of the year. The physics book followed. With the exception of the dantu puck, the locker should be empty. He had never felt the need to take much to school with him.

"There's nothing here," the assistant said. "It's empty."

"What?" the principal said and pulled a torch from his pocket and shined it into the locker. "It should be—" he turned and glared at Ashby. "Where is it?"

"Where is what?" Ashby answered.

"That damned puck. Where is it, Standing?"

So, they did know. Doran was right then. "Puck?" Ashby actually laughed. "Do I look like I would be the type of student that would play dantu?"

"Dammit." The principal turned and stepped away from Ashby. "Let him go."

"Yes, sir." The teacher released Ashby's arms and walked in the direction of the offices. Ashby shrugged his shoulders hearing one pop back into place.

"Clean up the mess Standing, and get to class. You're going to be late." The principal turned and left with the assistant and the coach. Ashby sighed, picked the English book up off the floor, and stared into his locker for a long moment. The puck was not there. Gone. Vanished.

Had he done that? It was completely possible, but his head didn't hurt and his nose wasn't bleeding. He shook his head and placed his physics book on top of the broken book. Maybe his oldest brother, Elija, remembered enough about bookbinding to fix it for him. He grabbed his bento box and opened it to find what had been a neat row of sushi rolls in disarray. He grabbed one with his fingers and popped it into his mouth, not bothering to unwrap his chopsticks. At least the wasabi and soy sauce had spilled all over the rolls. There was no time to do anything but chew and swallow them. He snapped the lid on his bento box closed and shoved it into this locker, shut the door, and ran to his next class.