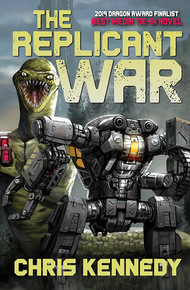 A Webster Award winner and three-time Dragon Award finalist, Chris Kennedy is a Science Fiction/Fantasy author, speaker, and small-press publisher who has written over 40 books and published more than 400 others. Get his free book, "Shattered Crucible," at his website, https://chriskennedypublishing.com.

Called "fantastic" and "a great speaker," he has coached hundreds of beginning authors and budding novelists on how to self-publish their stories at a variety of conferences, conventions, and writing guild presentations. He is the author of the award-winning #1 bestseller, "Self-Publishing for Profit: How to Get Your Book Out of Your Head and Into the Stores."

Chris lives in Coinjock, North Carolina, with his wife, and is the holder of a doctorate in educational leadership and master's degrees in both business and public administration. Follow Chris on Facebook at https://www.facebook.com/ckpublishing/.

The Replicant War by Chris Kennedy

Billed as "the most realistic game ever," Worlds at War was a video game unlike any other—one that promised a virtual reality experience that rivaled operating a giant mecha in combat. People flocked to the game in anticipation.

For some, the game lived up to and far exceeded their expectations—the level of graphics was indeed, "just like being there." The game didn't provide the experience many others had hoped for, though; for a large number of players, the game was "too real to be fun."

For video game design majors Ryan Johnson and Noah Bowden, the game play was incredible. It made them feel like they actually were saving a foreign world from horrific enemies, and they rapidly moved up on the leaderboard of the game's best players.

But then fatal accidents began happening to the gamers at the top of the leaderboard, including many at which men in black were seen. When Ryan sees those same men at his dorm, he realizes there is more going on in the shadows of Worlds at War than he has been led to believe…but can he determine what's going on before a fatal accident happens to him, too?

As they neared the crest of a hill, Noah stopped and held up a fist. Ryan stopped and then grabbed the newbie as he was about to go past. "Oops, sorry," John said.

Ryan shook his head. Typical kid—got bored and put it on autopilot, then started doing something else, while only watching the display periodically. It was a good way to run off a cliff or into a giant nest of snakes…like he almost just did.

Noah pulled the drone off his shoulder again. "There's not much juice left in it," he said, "I had hoped it would recharge more by now, but I want to get a last look." The drone flew off.

"Okay," he said after a couple of minutes.

"It ran out of battery. Hopefully, I can find it after the attack." He shrugged inside his cockpit. "Okay. On the other side of this hill, there is a large warehouse that is about 50 feet by 200 feet. We are approaching it from one of the long sides. There are three Advents on each of the long sides and one on each end."

"Yes, there are, and no, I'm not. We can do this. Here's what we're going to do. When I give the word, John, you're going to go to the top of the hill and jump up and down several times until the Advents see you. Once they do, come back here and shoot any that come over the hill. Let us know when they start moving, and we will go around from both sides of the hill and hit them from the flanks. Then, as the other ones come around the building, we'll take them out, too."

"But…but…it sounds like you're using me as bait," John said.

"Would you rather be the one going hand-to-hand with them?" Ryan asked.

"Good," Noah replied. "They're a decent way off. Keep moving and don't let them shoot you, and we'll do the rest of the work."

"Me too," Noah said. "Okay, Bait, go do your thing!" He turned and moved off toward the right side of the hillock, and Ryan went to the left.

After a couple seconds, John went up to the top of the hill, and Ryan could see him jumping up and down. He waited a moment, then he did it again.

"They don't see me," John transmitted. "What should I do?"

"Shoot them," Ryan and Noah said in unison.

"Pick the biggest one and shoot it in the head," Noah added.

The newbie fired his railgun, then he yelled, "Shit! They're coming! All six of them!" He came running back down the hill as flashes of laser fire winked over him.

"Six?" Ryan asked. "There were only supposed to be three!"

"Yeah, a bunch more came out before I fired."

And he fired, anyway, Ryan thought with a sigh. Stupid newbs. "Still want to do this, Noah?"

"Might as well. I have a project due soon and can't play much this week anyway if we lose our mechs."

As Noah said, "Three," Ryan was already sprinting around the base of the hill, while arming his .50 cal rifle and minigun. He'd only made it halfway around when he realized there were more than six.