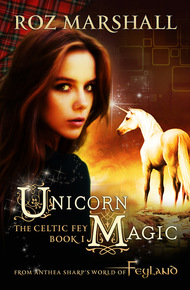 Roz lives in Scotland with her husband and the obligatory dog and cat. Her writing experience includes screenwriting, songwriting, web pages and even sentiments for greeting cards!

In Feyland, not everything is as it seems...

Feyland: a new computer game that allows Scottish teenager Corinne MacArthur to escape the sadness haunting her everyday life after losing a loved one. It's a game where legends come to life, the lines between reality and fantasy become blurred, and the impossible becomes—probable?

THE BREATH CAUGHT in Corinne MacArthur's throat. If anyone discovered her here, peering around the trunk of a silvery birch, she would be in all sorts of trouble.

She might not know very much, yet, about how to play Feyland, but she was sure she shouldn't be in a place like this on her first foray into the game. Surely it was way too advanced a level for a new player like her? But—that music—that singing… It was as delicate as rose petals, as pure as a mountain stream and as sweet as marshmallow melt. It captured her senses; filling her mind with its beauty so that for a few precious moments, the awful ache in her heart was replaced by a glowing golden warmth which emanated from the centre of the magical clearing—from him.

Standing on a wizened tree stump as if it were a dais on an international stage, the minstrel's voice rang clear and strong across the forest glade. Hair the colour of burnished copper curled around his head like a halo, a smear of freckles gilded his high cheekbones, and over his shoulder hung a drape of heather-coloured plaid.

The crowd surrounding him contained creatures that Corinne had only seen in picture books—elves, pixies, nymphs, and other mythical beings with legs like goats or taller than trees, that she couldn't even put names to. But they all seemed as wrapped up in his song as she was; hanging on his every word and straining to hear every syllable that spilled from his lips. Even the tiny birds perched on bush and branch had fallen under his thrall, their voices silent and their heads tilted in his direction.

He had a talent for drawing people in; for making his audience feel a part of his song. Looking out over the crowd, he made eye contact with one, then another, and another, each of whom would almost swoon after receiving his attention.

And then, for a heart-stopping second, those green eyes swept over to the edge of the clearing and locked, momentarily, with hers.

It was like a physical blow, driving the air from her lungs and all coherent thought from her mind. She rocked on her heels, gripping hard on the birch tree lest she fall.

Then panic set in. Had he spotted her? The allure of his song had caused her to forget the precariousness of her situation, and to linger when she should have quietly made her way back to a lower level.

But his gaze moved on around the throng, and she exhaled slowly. No, he didn't see me. Her green tunic and brown leather waistcoat gave her excellent camouflage in the forest, and thankfully she'd chosen chestnut-brown hair—like her own, in real life—for her archer avatar, rather than the more esoteric options of neon-fuschia or lightning-white that had been on offer. The undergrowth here was heavy, and the tree was sturdy. She was undetected. For now. But she'd need to get moving soon.

The last tinkling chords faded like the morning mist, and the troubadour stepped down from his platform, his song at an end.

As if released from a trance woven by his lyrics, there was a collective exhalation of breath from the watchers. Wings unfurled, translucent like the finest stained-glass window, necks cricked, releasing knots under skin as pure as parchment, and legs stretched elegantly like a prima ballerina at the barre before the fey folk began to disperse around the clearing.

Above them, thistle-light tufts of phosphorescence shimmered through the air as bright pixies darted through the trees and skimmed above the heads of the other creatures.

Before she could stop it, Corinne's stomach rumbled.

She froze, eyes scanning the clearing for any sign she'd been heard, legs tensing in preparation for flight.

But her luck was in. The noise had been covered by a tall elf picking up a pearly harp and strumming an ethereal tune. Nearby, a circle of dryads and naiads began to glide and weave in an intricate reel, and she slowly released a long breath. Careful!

In the corner, a blue-faced creature pulled a winter-white shawl over her head and shuffled over to a grass-covered mound that Corinne hadn't noticed until now. Sitting in regal splendour on a golden throne was a captivating man with eyes the colour of sapphires, an aquiline nose and angular jaw. Above skeins of platinum-blond hair, he wore a circlet of filigreed gold that led Corinne to the inevitable conclusion:

She'd read about him, of course, in the game's description: The Bright King presides over the Seelie fey in the Bright Court. He finds mortals amusing—at least until he has no more use for them.

She shivered at that last thought; and that was her undoing…