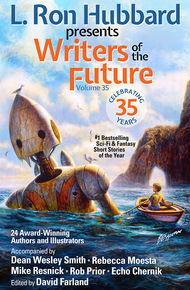 David Farland was an award-winning, international best-selling author with over 50 novels in print, and a tireless mentor and instructor of new writers. He built an audience with his "Daily Kick in the Pants" for writers, launched an editing service with MyStoryDoctor.com, created the Apex writing group, and he was one of the Founders of Superstars Writing Seminars (with Kevin J. Anderson, Brandon Sanderson, Eric Flint, James Artimus Owen, and Rebecca Moesta).

As a writing instructor, Farland mentored dozens who have gone on to staggering literary success, including such #1 New York Times Bestsellers as Brandon Mull (Fablehaven), Brandon Sanderson (Wheel of Time), James Dashner (The Maze Runner), and Stephenie Meyer (Twilight).

For many years he was the coordinating judge for L. Ron Hubbard's Writers of the Future Contest, perhaps the largest worldwide writing competition for new fantasy and science fiction authors, and he worked in Hollywood greenlighting movies and doctoring scripts.

In his own fiction, he won the Philip K. Dick Award for his first novel On My Way to Paradise, the Whitney Award for his historical novel In the Company of Angels, and the International Book Award for his fantasy thriller Nightingale. He is best known, however, for his New York Times best-selling fantasy series The Runelords, and his Star Wars novel, The Courtship of Princess Leia.

David Farland passed away in January 2022. WordFire Press is pleased to bring back into print this profoundly important and seminal book on writing.

Writers of the Future Volume 35 edited by David Farland

If you're ready to travel to a universe of mystery, sacrifice, and suspense, where the laws of physics are optional, book your journey here.

On this odyssey of enchantment, enlightenment, and endless possibility, you will meet a murderer who's out to save mankind, a cyborg who robs the dead to rescue the living, and a lost boy who holds the key to peace. Discover visions of the world, of mankind, and of the future that are sure to open your eyes.

Every illustration will touch you.

Every word will move you.

Every idea will take you by surprise.

Bonus Tips for Writers: Learn how to write or improve your craft with tips from award-winning and bestselling author and editor Mike Resnick and New York Times bestselling author L. Ron Hubbard. Internationally renowned artist, Rob Prior, shares tips of the trade for aspiring illustrators.

Wonder, adventure, and mystery abound in these exciting new stories!

In a strange country in a distant future, a desperate mediator must negotiate a contract between two crime lords—"Untrained Luck" by Elise Stephens

Idealists generally start revolutions—and either die in them, or are condemned by the men they fought for—"The Idealist" by L. Ron Hubbard

Li is struggling to defeat God, but is he following his own will, or is he just another one of God's puppets?—"Thanatos Drive" by Andrew Dykstal

At the edge of a faraway solar system, an android with noble intent finds that they must rob the dead to aid the living—"A Harvest of Astronauts" by Kyle Kirrin

It's tough to be a disabled girl struggling to live on the moon, especially when your best friend is in danger, but having a great attitude helps—"Super-Duper Moongirl and the Amazing Moon Dawdler" by Wulf Moon

When aliens take over the world, one father decides to take vengeance on the people who bullied his daughter—"Are You the Life of the Party?" by Mica Scotti Kole

Would you kill a child?—"Release from Service" by Rustin Lovewell

Buying your first submarine is always exciting, but it can also be a struggle—"Yellow Submarine" by Rebecca Moesta

When Claire's father cuts down the old tree at the edge of the garden, it was because the old enchanter had an itch for something he couldn't quite describe—"An Itch" by Christopher Baker

There's a lot to be learned from the crotchety old wizard who lives in the trailer house at the end of the road, but perhaps the most important things aren't what he is trying to teach—"Dirt Road Magic" by Carrie Callahan

Walter has always loved his wife, but is his love for her more enduring than time itself?—"A Certain Slant of Light" by Preston Dennett

Read on to discover amazing tales from some of the most talented new authors from around the globe, along with gorgeous art and timely advice from our panel of blue-ribbon judges.

Writers of the Future Volume 35

In this collection you will find twelve outstanding stories from new authors that we've discovered from around the world, and it was my pleasure, as Coordinating Judge of the Writers' Contest, to dig through the piles of manuscripts and discover these new writers. Each of the stories is also illustrated by an artist that we have discovered through our sister competition, the Illustrators of the Future Contest.

Every three months, thousands of writers and artists send their entries to the Contest (usually submitting their work online), and then I get to read the stories, sift through them, consider them carefully, and then pass the top eight stories on to our panel of blue-ribbon judges, who vote for their favorite stories.

In the field of short fiction, there really aren't other contests quite like the Writers and Illustrators of the Future. Sure, there are other contests, but none of them offer quite so much as these do. Yes, the cash awards, payment for publication, the training of new writers and illustrators, and the opportunity to get published are all great. In fact, the Writers of the Future Contest has become the premiere vehicle to help new authors launch careers into the professional marketplace.

Not only has the anthology become an international bestseller, topping many of the sales charts for anthologies of short stories, but it has also begun winning awards based on its high quality, as I mention in the "Year in the Contest" article at the back of this book.

But this year I want to focus on just how long this has been going on. This is the 35th year for the Writers' Contest and the 30th year for the Illustrators' Contest. That means that if you are reading this, the chances are excellent that these contests have been going on since before you were born. (The median age for all people is only 29.6 years, so statistically, odds are that you're under that age.) That's unprecedented for this kind of talent search. As a young writer in college, I began searching for writing contests to enter, and every year I might find one or two, but all of the ones that I entered passed away long ago. Only this one endures.

As a collection of stories, this one is unique. As an editor, the stories are submitted as "blind entries." That means that I don't know who wrote the story, whether the author was male or female, old or young. I don't know the author's race, religion, or nationality. I don't know anything about the entrants. All that I get to see is an assigned number on a story—nothing more.

Of course, we accept submissions from anyone, anywhere in the world. Because there is no cost to enter either contest, no matter how humble the means of an author or illustrator, or how far away they are, anyone can enter. So we tend to get a lot of winners from around the globe. In fact, we had five winners from the UK this year (the most in any volume ever) along with one from Canada.

Since the judging is blind, I get to focus on the various qualities of the story—the power of its concept, the exploration of themes, the author's facility with story, the stylistic strengths of the piece, and the use of voice and tone.

I can't judge the stories based on any hard standard, I have to look at each story in the competition and then compare them to one another. Ultimately, I go through several rounds of judging and make my picks, and that can be hard. I might be trying to compare a comedy to a thriller, or a story with a strong futuristic voice to one that has a great historical flavor. In other words, I am comparing apples and oranges to bananas and kumquats.

The Honorable Mention awards are becoming more and more coveted, and part of me wants to give more of them out. Very often we will get fine stories that really don't have anything particularly wrong with them. I sometimes wish that I could do more to encourage some of those writers who have their work "rejected." In short, I see a lot of fine work by some dedicated writers who don't place.

At this point, I like to give young authors a hint about what I am looking for, and there is something that I have never mentioned: I search for stories where the author has a strong grasp not only of how the world works, but how it could work better.

Let me explain that statement. Some people, when they write a story, will show characters with problems, and often those problems remain unresolved in the story. I might have a story, for example, that deals with a divorce, or with a broken legal system. But if an ending doesn't resolve well, it worries me. One of the most common endings in stories by new authors is that the protagonist in the story faces a huge problem and gives up—usually by killing him or herself. I won't publish those stories. I'm not looking for authors who recognize problems; I want authors who are bright enough to see solutions. I want authors who are not only capable of talking eloquently about problems, but who can ultimately, if they desire, have a positive effect upon the world.

So, in this volume, you will find a dozen stories of wonder, intrigue, and even horror. They span several genres and subgenres, but they all share one thing in common: they're all winners of the Contest, and all of the authors show tremendous promise.

If that isn't enough, each of the stories has been illustrated by one of the most talented new artists in the world, winners of the Illustrators of the Future Contest.

On top of that, we have fine advice on writing and art from some of our celebrity judges—Rob Prior, Echo Chernik, and Mike Resnick—and we've got some delightful stories from other judges, Dean Wesley Smith and Rebecca Moesta—along with a powerful piece by the Contests' founder L. Ron Hubbard.

I hope that this year's presentation will make you laugh, make you cry, astound and delight you, and ultimately fill you with wonder.

I know it has done that for me.