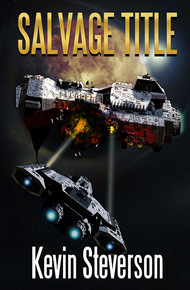 Kevin Steverson is a retired veteran of the U.S. Army. He is a published songwriter as well as an author. He lives in the northeast Georgia foothills where he continues to refuse to shave ever again. Trim…maybe. Shave…never! When he is not on the road as a Tour Manager he can be found at home writing in one fashion or another.

They couldn't afford a ship, much less the cost of registering one. But there is always a loophole…

Harmon Tomeral wanted nothing more than to go to space. Sent to an orphanage when his parents were killed in a sandstorm, the odds were stacked against him. Despite that, he made it to the academy and graduated in the top ten percent of his class…only to find out the fleet did what it wanted, regardless of regulations, and he came from the wrong planet.

He didn't give up his dream, though, because where there's a will, there's a loophole, and Harmon and his friends found their loophole in the Top Fleet Marine competition—the winner would get 100,000 credits, which would just be enough to start their own salvage company. If they could build a mech and win the competition, they would be set.

But the fleet had already shown they didn't want him in space, so it would be an uphill fight. Good thing his friends and crew were very much against fleet regulations.

A steady beeping brought Harmon back to the present. Clip's program had succeeded in unlocking the container. "Right on!" Clip exclaimed. He was always using expressions hundreds or more years out of style. "Let's see what we have; I hope this one isn't empty, too." Last month they'd come across a smaller vault, but it had been empty.

Harmon stepped up and wedged his hands into the small opening the door had made when it disengaged the locks. There wasn't enough power in the small cells Clip used to open it any further. He put his weight into it, and the door opened enough for them to get inside. Before they went in, Harmon placed a piece of pipe in the doorway so it couldn't close and lock on them, baking them alive before anyone realized they were missing.

Daylight shone in through the doorway, and they both froze in place; the weapons vault was full. In it were two racks of rifles, stacked on top of each other. One held twenty magnetic kinetic rifles, and the other held some type of laser rifle. There was a rack of pistols of various types. There were three cases of flechette grenades and one of thermite. There were cases of ammunition and power clips for the rifles and pistols, and all the weapons looked to be in good shape, even if they were of a strange design and clearly not made in this system. Harmon couldn't tell what system they had been made in, but he could tell what they were.

There were three upright containers on one side and three more against the back wall that looked like lockers. Five of the containers were not locked, so Clip opened them. The first three each held two sets of light battle armor that looked like it was designed for a humanoid race with four arms. The helmets looked like the ones Harmon had worn at the academy, but they were a little long in the face. The next container held a heavy battle suit—one that could be sealed against vacuum. It was also designed for a being with four arms. All the armor showed signs of wear, with scuffed helmets. The fifth container held shelves with three sizes of power cells on them. The largest power cells—four of them—were big enough to run a mech.

Harmon tried to force the handle open on the last container, thinking it may have gotten stuck over time, but it was locked and all he did was hurt his hand. The vault seemed like it had been closed for years.

Clip laughed and said, "That won't work. It's not age or metal fatigue keeping the door closed. Look at this stuff. It may be old, but it has been sealed in for years. It's all in great shape."

"Well, work some of your tech magic then, 'Puter Boy," Harmon said, shaking out his hand.

Clip pulled out a small laser pen and went to work on the container. It took another ten minutes, but finally he was through to the locking mechanism. It didn't take long after that to get it open.

Inside, there were two items—an eight-inch cube on a shelf that looked like a hard drive or a computer and the large power cell it was connected to. Harmon reached for it, but Clip grabbed his arm.

"Don't! Let me check it before you move it. It's hooked up to that power cell for a reason. I want to know why."

Harmon shrugged. "Okay, but I don't see any lights; it has probably been dead for years."

Clip took a sensor reader out of his kit, one of the many tools he had improved. He checked the cell and the device. There was a faint amount of power running to it that barely registered on his screen. There were several ports on the back along with the slot where the power cell was hooked in. He checked to make sure the connections were tight, he then carried the two devices to the hovercraft.

Clip then called Rinto's personal comm from the communicator in the hovercraft. When Rinto answered, Clip looked at Harmon and winked. "Hey boss, we found some stuff worth a hovercraft full of credit…probably two. Can we have it?" he asked.