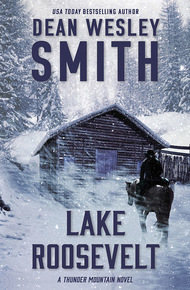 In a small diner on the Oregon Coast, Kelli Rae meets a handsome man named Jesse Parks. Turns out she had seen him in a picture taken in an old mining town in Idaho over a hundred years before.

And even worse, he had been following her.

A time-travel adventure in the popular Thunder Mountain series that promises to change everything about the series.

The fifth standalone novel in the popular Thunder Mountain series.

WHEN A BESTSELLING historical crime writer sees a ghost, it's a bad, bad sign.

Kelli Rae had no idea why a ghost would haunt her, especially in the Whale Port Diner on the Oregon Coast.

Coming north along the winding highway, the Whale Port Diner had looked clean and funky and just the type of place that might serve a great chicken fried steak lunch. A girl's juices could really get moving over a good chicken fried steak with thick white gravy with just enough pepper to give it a bite.

Add yellow corn near the white gravy and you have heaven built right into a small-town diner.

She had wheeled her little blue two-door Mercedes into the small empty gravel parking lot and climbed out into the fantastic smell of ocean and beach. Two blocks down the hill below the two-lane highway, the surf pounded the rocks and sand, the sound so loud it almost covered up the noise from the few passing cars.

It was just after four in the afternoon and the sun was still high in the sky, but the temperature and slight ocean wind made goose bumps appear on her legs. Since she had on Levi's shorts and a light blue blouse with a halter-top under it, the sea breeze cut right through her. Middle of the summer and the place felt cold. She couldn't imagine what the wind off that ocean felt like in the winter.

The wind whipped at her short black hair, even more so than while she was driving with the top down.

Note to self: Don't come back to the Oregon Coast in the winter.

Along the two-lane coast highway small wooden buildings seemed to huddle together, forming a sort of downtown area about three blocks long. A couple antique stores, an old-style theater, and a small grocery store that she could see. The ocean roared down the hill to one side, steep mountains climbed away from the town on the other side. It felt like the town was just hanging onto the side of the hill, hoping to not get blown away in a big storm.

She took a deep breath, letting the thick ocean air clear her mind as she moved her shoulders and arms around to loosen up tight muscles. There was a slight hint of fish in the air, and ocean salt. She could understand just from the wonderful smell why someone would live out here in the sticks, on the edge of land.

She took another deep breath of the thick air. It was almost good enough to eat.

Maybe not as good as chicken fried steak, but it could be close. Depended on how good this diner's food was.

She studied the front of the little place for a moment. It looked good, like it had top food. A person could always tell the quality of the food in a diner by how rundown a place looked. If it was rundown, but not cared for, the food sucked. But rundown and still loved, the food would be top notch.

This diner looked like it had been a shop of some sort at one point and been remodeled a few times. It now had a steep pitched roof and black shingles. The reddish/brown paint on the wood siding was peeling slightly from around the large windows across the front facing the ocean and the highway. And one roof edge was warping slightly. But the windows were clean, the sign fairly new, and no trash littered the gravel parking lot.

Rundown, but loved. She could be in for a top-notch chicken fried steak.

The door actually had a bell on it and it clanged softly as she entered. Oh, how perfect!

Then things just got better. The freshly baked bread smell hit her like a hammer and she just stopped with sensory overload. Ocean breezes outside and fresh bread inside. Clinging to the side of a hill trying not to slip into the ocean might be worth it just for the smells.

Four empty booths filled the area under the front windows, another on the end next to what looked like a real Wurlitzer Bubbler jukebox. That thing had to be worth thousands. It wasn't on at the moment and instead some oldies radio station played faintly in the background, not loud enough to be distracting.

A Formica-topped counter ran along the back wall with eight bar stools attached to the floor in front of it with cracked red leather seats. She was in diner cliché.

Or maybe she was still back in her hotel room a hundred miles back down the beach dreaming of this place.

She was the only customer, so she had her choice of where to sit, so she headed for the counter and grabbed the stool third from the end on the left, facing the kitchen window where the sounds of pots banging could be heard. The cash register, an old black one with real push keys, covered the far left end of the counter.

The leather seat felt cold against the back of her legs, but not sticky. Another good sign.

"Hi," a woman said to Kelli, smiling as she came out of the kitchen area in the back wiping her hands on a white towel. "Howya doin'?"

The women was taller than Kelli's five-six by a good six inches and had wide, square shoulders and a face that looked square as well. A big woman with dark hair pulled back and a wide smile that filled her almost oversized face. Her accent told Kelli she was from the Chicago area of the Midwest.

"Best on da coast," the women said. "Comes with potatoes, yellow corn, and a fresh dinner roll. Choice of clam chowder or a salad to start. Eight-ninety-nine."

"The rolls are what I'm smelling?" Kelli asked.

"Sure are," the women said. "Dave just took them out of the oven, so they'll be really hot and soft."

"Perfect," Kelli said. "Chowder to start, with a cup of coffee."

Her mouth was already watering and her stomach growling as the women turned and went back into the kitchen without writing any kind of ticket up. She had only had a sandwich for lunch about three hours before, so this was perfect.

Behind her the door chimed and she glanced around to see a state cop come in. He was a looker, with deep blue eyes and a handsome square face. He had on a leather jacket and all the stuff police lugged around with them on his belt. He smiled at her and she smiled back as he took a seat in one of the booths looking out the window.

This little town was really starting to look up. A great diner and a handsome man, all in the same five minutes. She was a writer, she didn't need to live anywhere. She might think of staying here for a short time, although if she did that she would miss her office in her home in Las Vegas. She loved that book-filled, light-filled room. She had already been away from it almost too long.

Of course, the ghost was still fifteen minutes from walking through the door and changing everything.